The goal of this article series is to help you identify key price levels that govern certain wave relationships so you can establish your game plan prior to the moves taking place.

Earlier today, the AUDUSD has broken below the January 2014 low elevating the bearish scenario from our previous article.

Though this break temporarily suspends the bullish outlook, we will unpack and expand on two other patterns that could be developing as a result of this break below .8659. 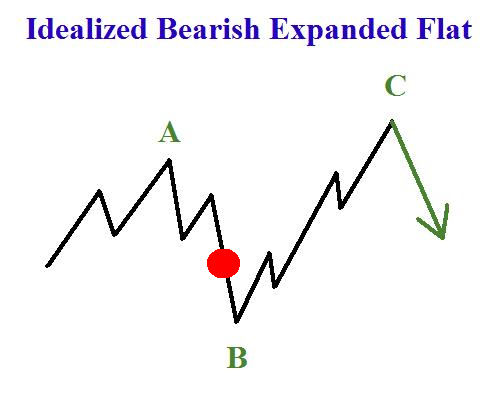 As we can see from the idealized pattern above, the ‘B’ wave slightly exceeds the beginning of the ‘A’ wave which gives the pattern the expanded name. The longer wave ‘B’ acts as a false break out.

Once the ‘B’ wave exhausts, then prices rally in the ‘C’ to exceed the end of wave ‘A’. If this is the pattern in development, then the ‘B’ wave is approaching its exhaustion point. 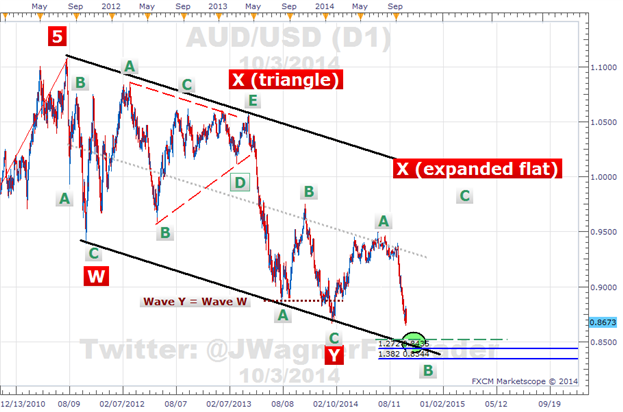 Inspecting a smaller time frame chart (not shown), wave ratio analysis identifies a slight new low near .8650. Also, .8560 and the lower black channel line near .8480 are potential stopping points for wave ‘B’, too.

The good thing about this pattern is that ‘B’ waves typically move less then 1.382 times the length of ‘A’. This puts a floor down near .8344. A move below .8344 lessens the probability this is the pattern and likely elevates the more bearish pattern listed in the next section.

As you can see in the idealized pattern, wave ‘C’ surpasses ‘A’. If this is the pattern, then wave ‘C’ would likely move above 95 cents.

Bottom line, we are close to a turn higher and the final target of this turn higher would be 800+ pips from current levels. So long as we are above the black channel line at .8480, we could see this turn push above .95.

The alternate ratio analysis is that we are in wave 3 of ‘C’ of a downtrend. This has more bearish potential behind it. 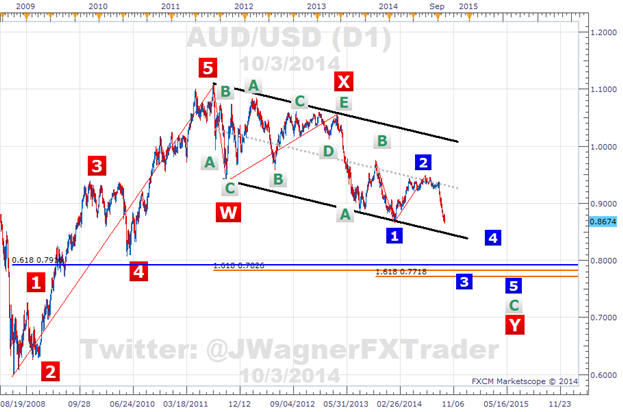 Under this bearish pattern, price will likely fall towards the confluence three different wave ratios and relationships near .77-.79.

So long as we are above .8344, this is a lower probability simply because the shape of it doesn’t fit the best. Though it may not have the perfect look, it is worth keeping on mind in case we break lower.

Bottom line, the lower black channel line is a key level to watch. So long as prices are above it, be on alert for a multi-hundred pip bullish move. On a break below, the alternate is elevated and several hundred pips are exposed to the downside.