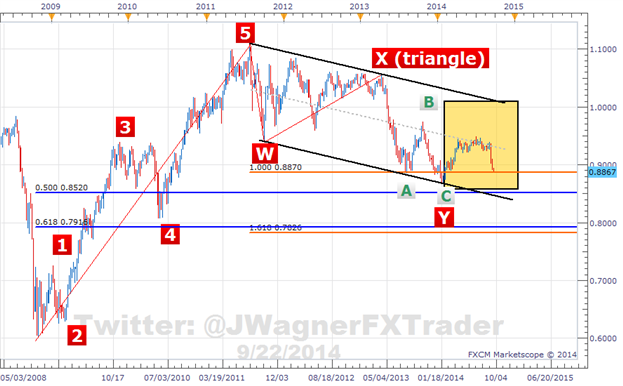 AUD/USD Sell Off Intensifies, Now What?

-A break below .8659 doesn’t negate a bullish stance, just delays it

The Aussie has garnered attention lately as its sell off has intensified. Using forex technical analysis and namely Elliott Wave Theory, we analyze two potential wave counts and what the implications are for those patterns.

From a longer term perspective, the W-X-Y (red labels) appears to be the favored count. The question becomes, how is the tan box below labeled? There are a couple different ways to count those waves. The charts under the Bearish and Bullish headings focus in on the price action since the red wave Y low in January 2014.

That is a very nice equal wave pattern down to the wave Y low.

Interestingly enough, prices have had a difficulty in moving above the mid-line of the channel. This suggests overall weakness and a move above the midline would be an early indication of strength.

As indicative of the W-X-Y waves, this is a complex correction of the 2008-2011 impulsive move. There are a couple of ways to count out bearish patterns. The nearest bearish target would be the bottom end of the black price channel near .84. The wave labeling assumes a mild push below .86 where as a more aggressive sell off would have an entirely different wave labeling. 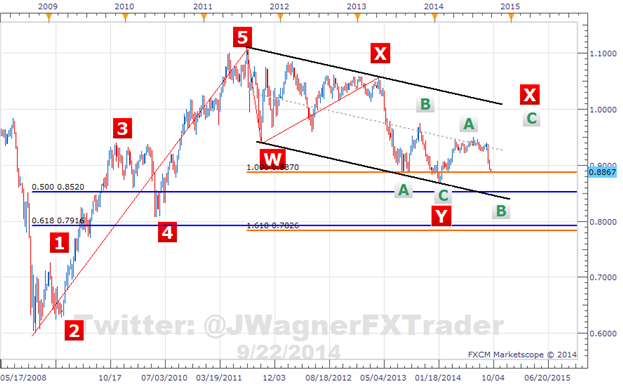 So long as we are below .9200, the bearish potential needs to be respected.

A move above .9200 and the grey midline begins to build the case the bearish count is delayed if not invalid altogether.

Bottom line, a break below the January 2014 low nullifies the bullish count below and suggests a visit towards .84-.85 minimally.

Complex corrections are just that…complex so keep an eye on levels and let breaks of those levels eliminate possibilities.

A 5-3 wave sequence typically retraces 50-78% of the original move. The 78.6% retracement level is .8840, so if prices are going to fulfill this pattern, they will need to bounce fairly immediately and preferably before .8840. 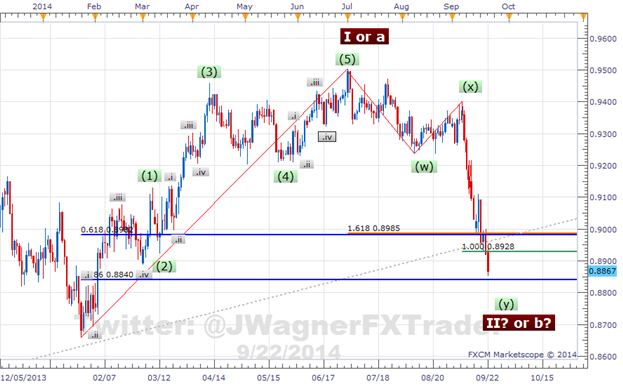 If this bullish case is correct, then moves above .92 will build the case to its validity. If the July 2014 high can be cleared, then the next level of targets becomes .9675.

The risk to this trade can be placed at the .8650 area. If a successful move towards .84 develops, we will reassess the wave relationships to identify potential turning points to enter on.

Bottom line, I have slightly more confidence in the bullish AUDUSD pattern than the bearish side. The 5 wave sequence from the January 2014 low is fairly clear with green waves 1, 3, 5 each subdividing into 5 grey waves. This suggests to me a ‘cleaner’ pattern. As a result, .8659 will likely hold, but even if it fails, a secondary wave pattern (2nd picture above) suggests only a mild sell off towards the 84-85 cent handle.

The cleaner green 5 wave pattern suggests an aggressive sell off is lower probability until .8659 is given.

EURGBP Looking to Emerge from the Bat Cave