Article Summary: USDJPY has tested key resistance at 84.17. If this resistance holds, the USDJPY may be in the final stages of a 91 week triangle pattern. If this pattern fails, then sell a weak JPY while buying NZD.

The Japanese Yen has arguably been the weakest currency since the Federal Reserve made the announcement of additional rounds of quantitative easing back on September 13, 2012. Today, with a new prime minister in town as a result of the Japanese elections, the call is for more aggressive easing for Japan to fight its deflationary pressures.

This means an already weak Japanese Yen may get weaker. A sustained break above 84.17 could be a trend defining moment for the USDJPY as subsequent higher highs and higher lows would be in place. 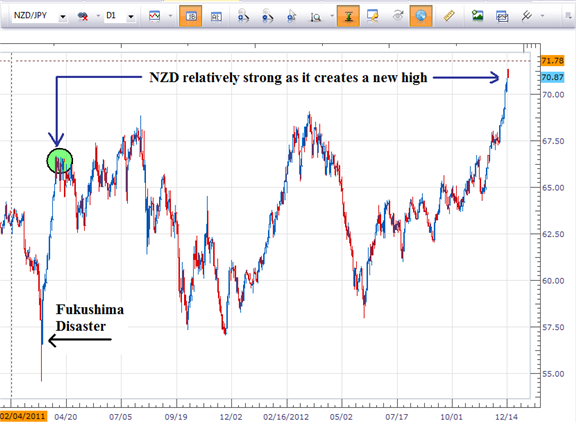 If we do see a sustained break above 84.17, consider selling the weak JPY against a currency other than the US Dollar. For example, buy a relatively strong NZD…or essentially buy the NZDJPY currency pair.

Of the Japanese cross pairs, the New Zealand Dollar is the only one which has traded above the April 2011 high. This was a swing high in the USDJPY pair which was result of coordinated central bank intervention in response to the Fukushima nuclear disaster. Therefore, NZDJPY has been showing relative strength against the other JPY crosses and as forex traders, we should look to buy strong currencies and sell weak currencies.

Therefore, if you believe the USDJPY will continue to strengthen over the long run, use this pull back to consider buying the NZDJPY near 69.60 which was the October 2009 high which may act like support for the pair.

However, if you examine a longer term chart, you’ll notice the USDJPY is at key resistance defined by the March 2012 high. So long as this resistance level, the pair may be carving out a bearish triangle that has been in place since March 2011. 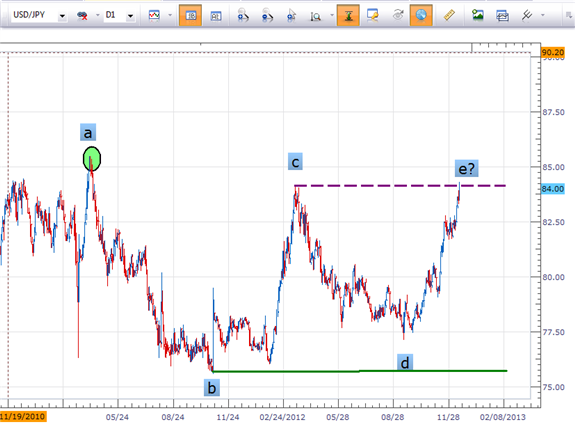 The USDJPY has been consolidating sideways since the devastating 2011 earthquake and subsequent tsunami. Since March 2011, the total range of the triangle has been about 1000 pips from 75.56 to 85.51.

Tonight’s gap higher severely strains this bearish pattern. However, important turns can take place during emotional news releases. With Shinzo Abe taking over the controls at the Prime Minister slot, most market watchers are expecting a strong push be made towards the Bank of Japan for more stimulus which may weaken the JPY causing the crosses to continue higher.

Therefore, a strong emotional response to the elections could become the back drop for the Japanese Yen to strengthen. Use today’s high of 84.40 as the risk level for any short trades taken on USDJPY.

If the bearish triangle pattern does play out, there is a reasonable chance of new lows seen in the coming months below the low of 75.56 (green line).

Therefore, that makes trading the triangle fairly straight forward. The stop loss is placed just above today’s high near 84.50 and target 75.60. If one entered near the current market price of 84.00, this makes for a very strong risk-to-reward ratio.

For additional articles on trends, read the following:

Looking for a strategy to trade? Take our free Moving Averages training course and learn how to use this widely followed indicator in creating a trading strategy.