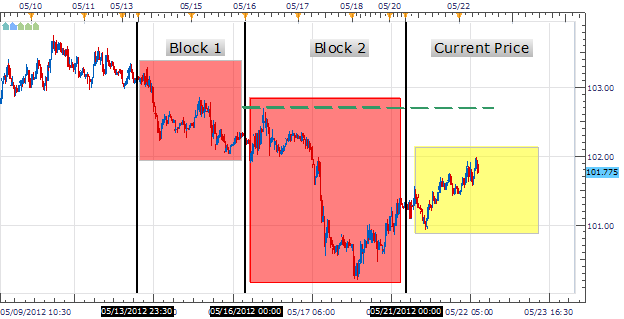 The Building Blocks of Trend Development 05.22

Moving into the fourth trading week of May, the Forex market has seen a series of reversals against longer term primary trends. Both the USD and JPY currencies are giving up gains developed earlier in the trading month. Today we will review the trend for both the EURJPY and NZDUSD using our building blocks of trend development to see if momentum may resume. Finding continued strength in the market will allow us to focus on specific pairs for the remainder of the week ahead while avoiding those specifically that lack momentum and market direction.

JPY pairs still are considered the strongest trending pairs in the market. The EURJPY in particular has declined 690 pips from its April 20th high. This is pictured below with both Block 1 and Block 2 making new lows. Currently the May 2012 low resides in Block 2 at 100.22. This week however price has temporarily been proped up, moving as 181 pips higher from the mentioned lows. Traders are watching the Block 2 high at 102.72 to invalidate our bearish bias. A break to higher highs would at least temporarily but a hold to the bearish momentum seen so far in May for the EURJPY.

The momentum shift described above is also affecting the NZDUSD currency pair. Trading as much as 700 pips lower from the April 13th high , the NZDUSD was previously one of the markets strongest down trending pairs. Over all ,momentum is still towards the downside with lower highs being formed in both Block 1 and Block 2. However, with our current pricing block failing to make a fresh low our trend begins to come into question. Traders will look specifically towards the Block 2 high at 76.80 for resistance. A break above this level, would conclude our bearish bias on the NZDUSD at least temporarily. 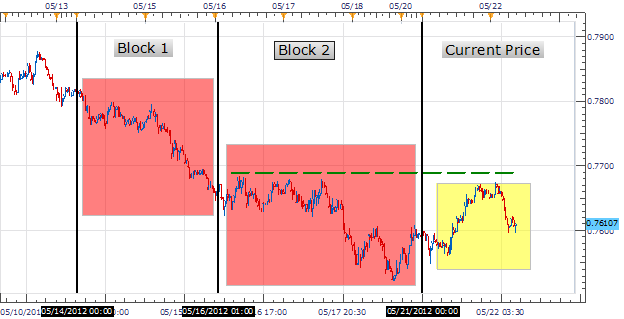 Using the analysis above, my preference is to continue to find opportunities to sell the EURJPY and NZDUSD currency pairs. This bias will be invalidated on the creation of a higher high and a break of resistance on both charts.