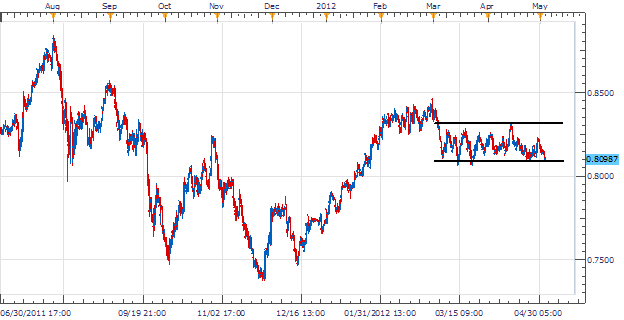 Analyzing Entries for the Next Kiwi Move

The NZDUSD (Kiwi Dollar) currency pair is one riddled with uncertainty. It has spent the better part of 2012 heading higher from its January low at .7708. After moving as much as 677 pips to our standing high at .8385, the pair has faltered failing to advance further to challenge the pairs all time high at .8841. Currently the pair sits trapped in a range waiting for a catalyst to break price action free to determine its next direction. Breakout traders can prepare for this event by setting entry orders using support and resistance levels.

Moving in to the last two months of trading on the daily chart below we can better see the strong range earlier mentioned. Overhead resistance on the NZDUSD pair has been created near the .8300 figure. This level has has been created by connecting the March 2nd and April 12th highs . Support is measured in the same fashion connecting the March 14th low at .8061 with the March 22nd low at .8075. Once these points are found we can begin setting up a strategy for this market environment.

Traders can use breakouts as an opportunity to strattle the market with entry orders. This process is very similar to what we have used on past trades such as the USDCAD, from the April 10th Chart Of The Day. Entries can be set first above resistance to buy on a breakout over the high mentioned above. As well orders to sell can be placed under the previous low. In this manner, regardless of the direction our chart breaks out we will be prepared to open up a new position, in the direction of our new trend. 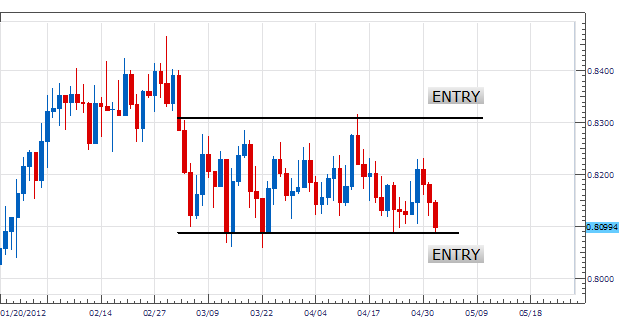 My preference is to bracket the NZDUSD using entry orders. Entries to sell should be set under .8040, with entries to buy over .8440. Stops can be set 200 pips away near .8200 on both orders. This will place stops in the middle of our range upon a breakout. Limits should be set at a minimum of 400 pips away creating a 1:2 Risk/Reward ratio.

Alternative scenarios include price continuing its range moving between support and resistance.