The September FOMC meeting concludes tomorrow with a lot of media debating if the Fed will hike rates or not. It is an interesting debate because economic data such as jobs are improving. However, other parts of the world are slowing in growth (think China) and US inflation is non-existent. Though the Fed would like to lift off of zero bound interest rates, the fear is that increasing rates in a dis-inflationary environment will create more economic problems. So the debate continues.

In this article, we will look at the technical picture of the EUR-USD using Elliott Wave Theory. We will share a preferred bearish scenario and an alternate bullish scenario with levels to watch. Then, we’ll look at the sentiment readings and the On Balance Volume indicator to reveal some hidden trends which may lean us towards one scenario. The intent of today’s post is to set up the analysis PRIOR to the FOMC news announcement tomorrow.

The August 24 high was a meaningful high. The move to the downside since then has taken place in 5 waves which terminated on September 3. The next day, we issued a statement “2 views suggest counter trend bounce higher.” At that point, we look for a 3 wave counter trend upward bounce labeled a-b-c. It appears this corrective bounce is evolving into a more complex correction (labeled w-x-y). In that case, we could see another spike up to 1.14-1.15. A less likely scenario is that the move finished on September 14 at 1.1375 and wave (iii) down has already started.

Therefore, we have evidence building the trend is shifting to the downside and that the next meaningful move would be to the downside. At the same time, upside mobility should be limited to below 1.1500. This next move to the downside, if it transpires, would be labeled a wave (iii).

Third wave moves tend to be the longest and strongest. This viewpoint also places the EUR/USD in a similar situation to the Sterling, which we wrote about last week.

There is an alternative view we are tracking as well. Remember, when trading with Elliott Wave Theory we are never certain of the wave picture until the waves are finished. Therefore, we must bring a probabilistic approach and realize there are many wave counts in play and that we let the market exclude certain counts because they break one or more of Elliott’s rules.

Since the March 2015 low, prices have been overlapping higher in complex fashion as a correction. Though the preferred wave count is that a resumption of the trend continues lower to retest the March lows, there is an alternative count that needs to be considered.

This wave picture is a bit trickier because so long as prices are above 1.08, this picture still is possible and ultimately suggests a retest of the 1.1700 high. In other words, wave (x) could sell off towards 1.08 and keep the door open for an eventual visit to 1.17.

In these scenarios, it is important to look at the internal structure of the waves and seek out equal wave patterns or overlapping waves that suggest the corrective nature would continue higher. To date, this exists and we need to keep it in mind.

Again, this alternate suggests we form a partial retracement lower before one final move higher to retest 1.17.

Now that we have a preferred and alternate count in mind, what does sentiment and volume suggest that might sway our bias?

The sentiment for EURUSD has been bouncing around between -1.7 and got to as high as -1.25 this morning. Prior to the large run higher in price this morning, traders are opening more bullish positions as there are 6% more long positions relative to yesterday. Additionally, traders are closing out their short positions as shorts are 11% below levels seen 24 hours ago. Taken together, this is driving the SSI ratio higher.

SSI is a contrarian type of indicator so when traders become more bullish, it is seen to be a bearish indicator on market prices. This is because SSI reflects trader’s opinions in trades they have already initiated. Therefore, an increase in bullish trades means they become a future pool of sellers.

An increasing SSI reading suggests a bearish move may be developing.

OBV allows us to check below the hood for non-obvious trends. The picture is mixed according to the OBV indicator.

When applying the indicator to the daily chart, it suggests there has been more volume on up days then volume on down days. From a longer term trend, this paints the picture that prices may continue higher and favors the alternate view above (not shown).

When we apply On Balance Volume to the 4 hour chart, the indicator tracks closely to price. So no significant trends are noted on the 4 hour bar (not shown). 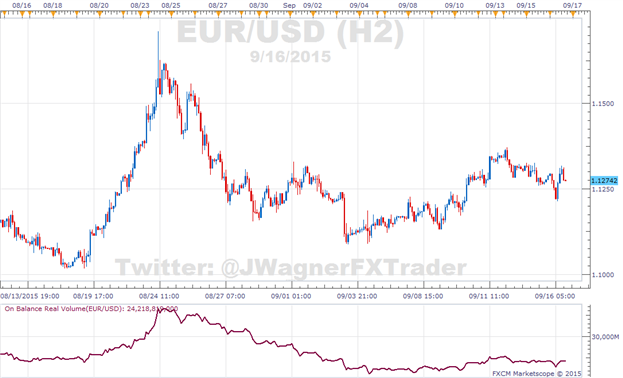 Lastly, when analyzing OBV on the 2 hour chart (see above), it paints a bearish picture since the Aug 24 high. Price has been materially higher off the lows from September 3, yet the OBV indicator is at the lows of the same day.

Taken together, this means the total EUR-USD volume in September is running lower than average. However, what trading volume that is being created on a shorter time frame, is seeing some selling pressure. Since the volume is below average, that selling pressure isn’t enough to shift the longer term charts lower.

The wave picture and SSI are suggesting we could soon embark upon a wave 3 sell off. On Balance Volume is not as clear cut. Therefore, a break below 1.1085 or a rise up to 1.15 would spark short trades. Though we have a bullish alternative, a meaningful rise above 1.15 or a sell off towards 1.11 that is not impulsive would shift the scales towards entering long the market.