My Favorite Trading Tool, How to Use the SSI

In my recent article, 3 Things I Wish I Knew When I Started Trading Forex, I mentioned how I wish I had learned about the SSI sooner as it has made a fundamental difference in my trading. Based on the response from our readers, it came to my attention that not many have used, or even heard of, the Speculative Sentiment Index or SSI. Today’s article was written to fix that.

What is SSI? What is Retail Sentiment?

I won’t lie, Forex trading is hard. Most traders that participate in the Forex market lose money and for the first couple years of my trading career, I was a part of that statistic. It was only when I began using the SSI that I started to see some positive results.

The SSI is an index released twice a day that gives us a comparison between how many traders are buying and selling each major currency. Each account is counted once, regardless of trade size. The result is a single number, positive or negative, that gives us trader sentiment. If SSI is positive, there are more buyers than sellers. If the SSI is negative, there are more sellers than buyers.

These calculations are updated for each major currency pair twice a day inside DailyFX Plus, pictured above.

How Can the SSI be Used?

So now that we understand how to read the SSI, how can this be used in our trading? It is actually very easy. We want to only take trades opposite of the SSI. So if most people are buying a pair (SSI is positive), we only look for selling opportunities. If most people are selling a pair (SSI is negative), we only look for buying opportunities. SSI is what we call a “contrarian index.”

I’ve heard a lot of debate on why SSI should be used as a contrarian index, but my two favorite explanations are:

Regardless of the reasoning we use, there is no denying that price often times has an inverse relationship to SSI. In the USDCAD SSI chart listed below, we see SSI drawn as red and green bars while USDCAD’s price is drawn as a thin black line. Notice how price moves during times when SSI is negative and when SSI is positive. 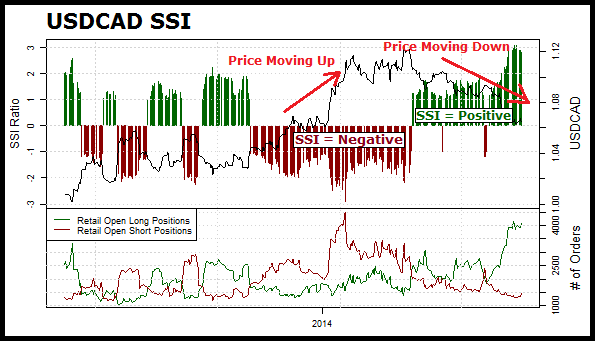 Understand that there will be times when SSI will get us into some bad trades. It is not the Holy Grail. But it can be used as effective direction filter for your strategy, whatever your strategy may be. It certainly has helped mine.

What Other Ways Can SSI be Used?

There is more than one way to use SSI which I do want to make sure I mention in this article. The first alternate method of using SSI is the act of creating “Synthetic SSI.”

You might have noticed that not all 50+ currency pairs are listed on DailyFX. This is mainly due to low volume on many of the pairs, but there is a way to create a synthetic SSI value for popular currency crosses that are not a part of DailyFX’s SSI page.

The steps for creating Synthetic SSI for these crosses are fully explained here. It is a heavier read than many of my articles, but useful for traders that frequently trade non-traditional cross pairs.

Another way to analyze SSI is one not too often talked about, analyzing the change in SSI rather than the raw SSI value itself. For example, if SSI for the EURUSD is -4.50 and changes to -1.60 the next day, this is a huge change in sentiment. Even though sentiment is still showing more sellers than buyers (traditionally an SSI bias to buy), the massive shift could indicate we might look to sell the EURUSD instead.

Studying the effects of change in SSI and price is a topic complex enough for its own article, something I intend to write up at a later date. But in the meantime, using SSI in the traditional manner is suitable in most cases. SSI will rarely move that quickly.

Hopefully, this article has opened your eyes to the world of sentiment trading. Using SSI as a simple direction filter could turn a losing strategy into and winner, or increase the profitability of an already successful strategy. Whatever the case, I wish you well with it. To test the effect that SSI might have on your trading strategy, download a Free Forex Demo account today to trade risk-free on real price data.

How Cognitive Biases Can Affect Your Trading Performance
Advertisement