(Hypothetical Performance is not indicative of future results.)

In my previous article about SSI, I described how the Speculative Sentiment Index works and how it changed my trading career. I also showed how to download SSI data in order to test your own personal trading histories to see what effect this filter could have. During today’s article, using the Trading Station Backtester and SSI data, we will be able to see its true effect on a basic strategy.

When it comes to backtesting a strategy, the most difficult part for me is programming the actual strategy onto a trading platform. I can come up with strategy ideas all day long, but since I can barely code, I tend to get stuck at this point. So I thought it would be important to pick a simple strategy that is already coded into Trading Station Desktop. This means anyone that has access to a windows computer and the internet can duplicate my results and expand upon them.

We will test a Simple Moving Average Crossover strategy set to 50 and 20 MVAs on an Hourly chart. I will set a 40 pip stop and 80 pip limit to follow what I believe is a sound choice as far as risk management goes. This will be my baseline strategy before I start referring to SSI as a filter. 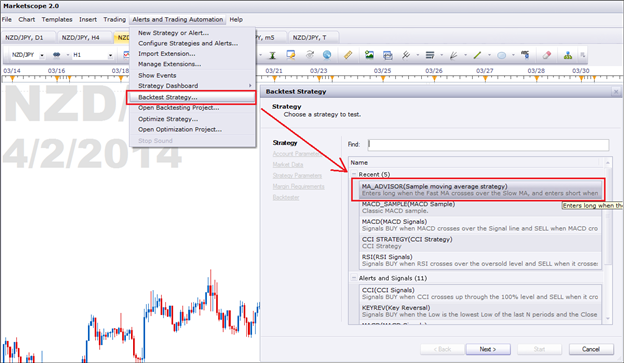 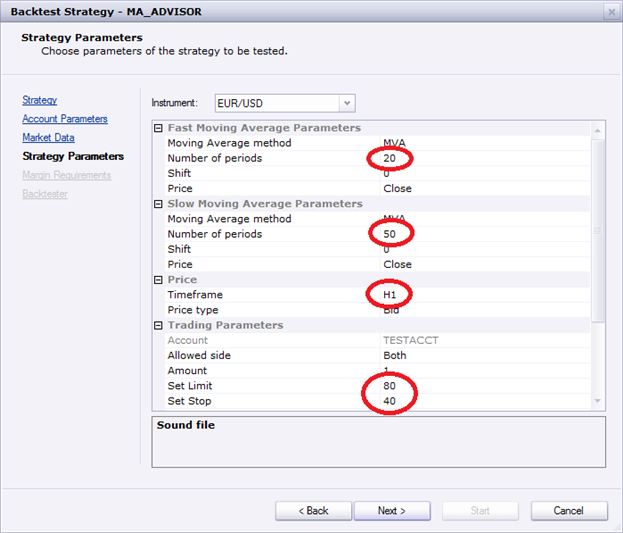 Once we select our strategy's parameters, we then need to pick the pricing data we will be testing on. We want to pick price data for several pairs where there was a long stretch of positive or negative SSI values, that way we can test two different scenarios on the same piece of data.

Once this is complete, we compare the results of the two backtests and see what yields better results.

To find stretches of time where a currency pair held a positive or a negative SSI, we should use the SSI data we acquired during our last article. We should look for periods of 2+ months where most days show either a positive or negative on the EURUSD, GBPUSD, USDCHF and USDJPY. Now that we have our price data selected, we can begin backtesting.

(The following results were created from randomly selected time periods and I had no prior knowledge of their results before posting them in this article. I did not omit any tested data either. Everything is shown below as I tested in real time.) 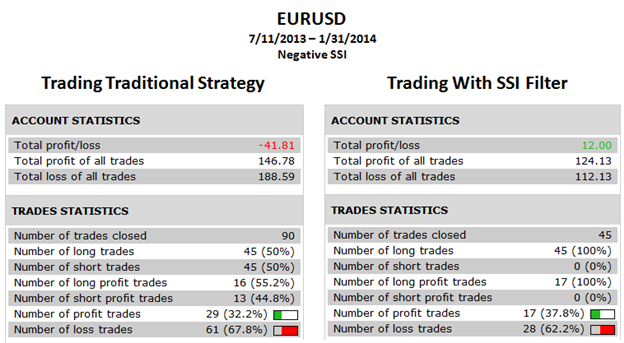 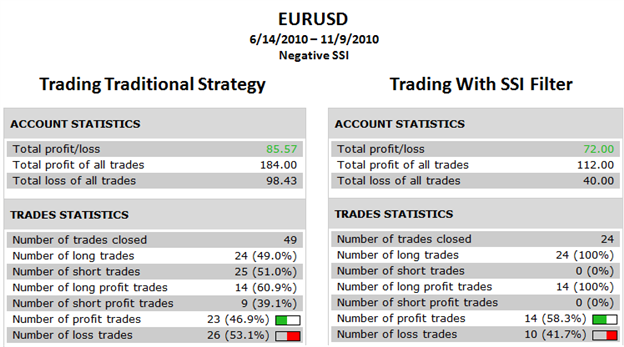 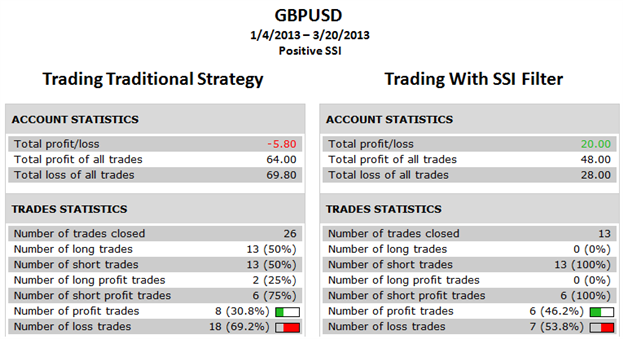 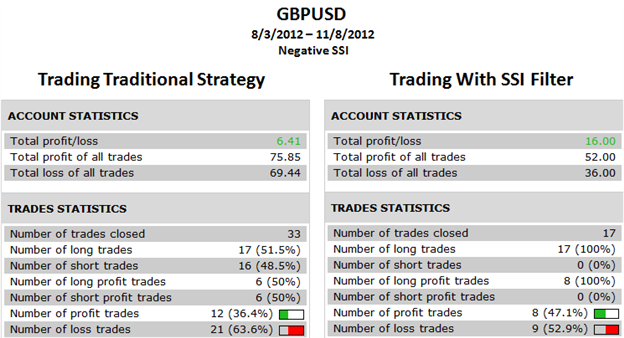 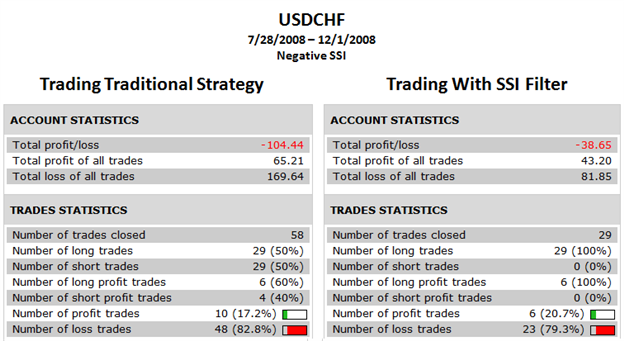 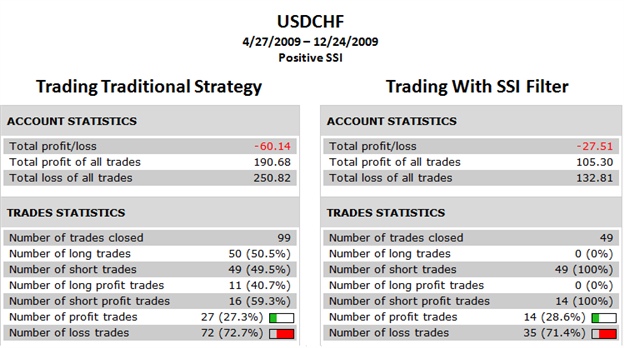 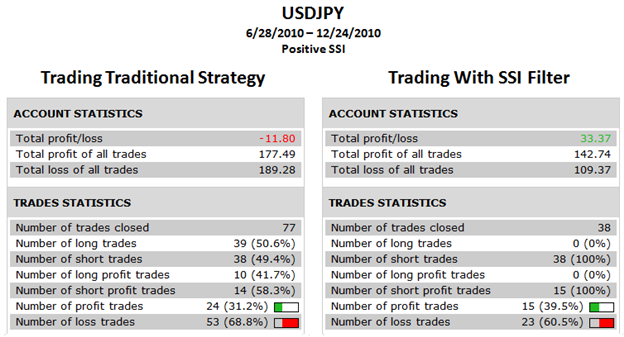 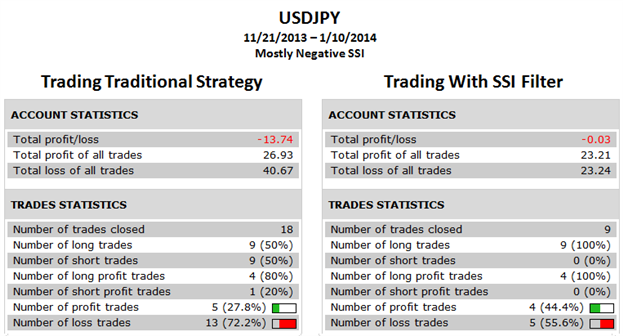 What Were the Results?

I believe the results speak for themselves. It's incredible how an idea so simple can have such a huge impact on a trading strategy's performance. I tried to include a good mix of positive and negative SSI and tried to spread the test over as many years as possible amongst the 4 pairs. These are the highlights from the results.

What is the Next Step?

While this test was carried out on several pairs and periods of time, it does not 100% guarantee that any strategy can be improved by the SSI. The only way to know if the SSI will work for you as a filter is to test it out yourself using an approach similar to mine, or by finding a more efficient way of testing your strategies. For me however, the data above confirms what I already believed to be true. The SSI is the greatest tool that I have ever used for Forex trading.

Want to learn about trading automation using the Mirror Trader platform? Join us for a live Mirror Trader Platform Walkthrough Tuesdays at 11m ET and Wednesdays at 3pm ET.