The Speculative Sentiment Index is by far my favorite Forex trading tool. One problem however, is that this data is not published for many cross currencies that traders trade, like the EURAUD, NZDJPY, CHFJPY, etc. In this article, I explain how synthetic SSI values can be generated for these types of pairs.

SSI gives us a comparison between how many retail Forex traders are currently long and short on each major pair. We want to trade opposite of the retail trading crowd meaning it’s a “contrarian” index. The idea is that most retail traders lose money, so there could be an inherit edge in fading them or placing the opposite trade.

We can see in the image below a snapshot of what the SSI looks like, updated twice a day for free to members of DailyFX Plus. All of the major pairs are represented as well as a few CFD products for traders outside the United States.

But what about some of the other currency pairs that are not listed? How do we know what the sentiment is on those pairs? This is where SSI becomes “synthetic.”

This sounds complicated the first time around, but makes sense over time. I am going to start with an explanation of how this works with the following formula. I will then go through 3 examples to put it into practice. 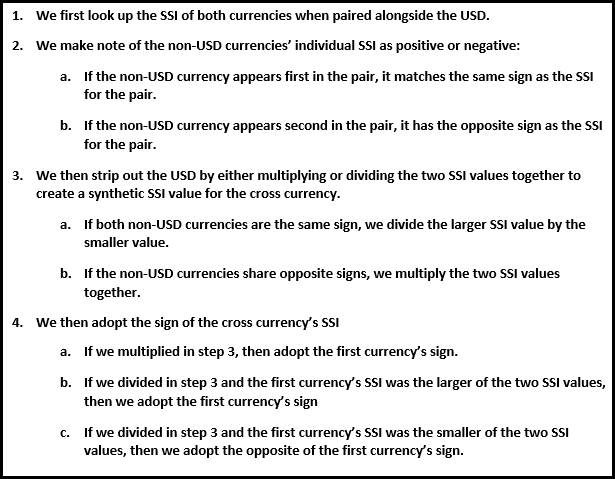 Did you get that? Probably not, which is ok. It took me awhile before I could wrap my head around it. Let’s take a look at 3 examples using the formula above. 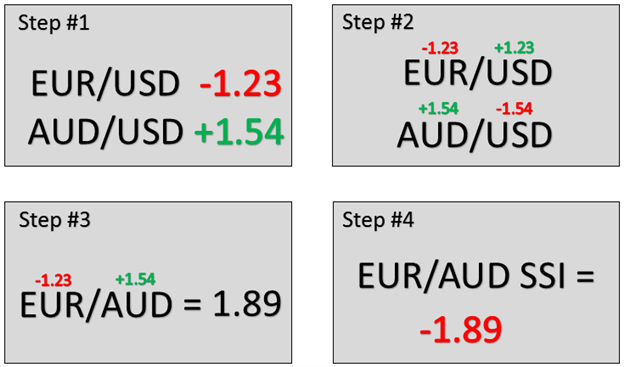 This is the simplest example of the group. Both currencies are the first currency in their USD pairs, so each adopt their SSI signs. Because the signs are opposite of each other, we multiply the two SSI’s together. The SSI for EURAUD is negative because the EUR has a negative SSI and it leads the pair. 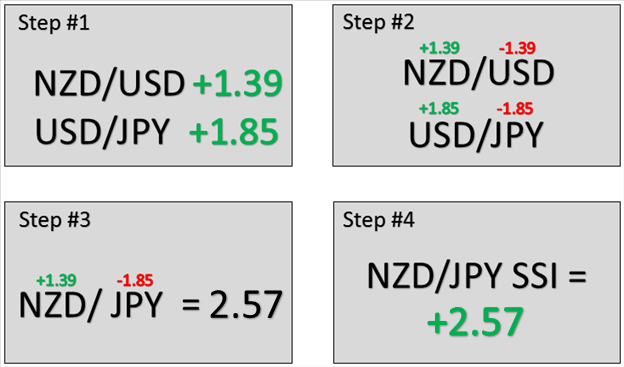 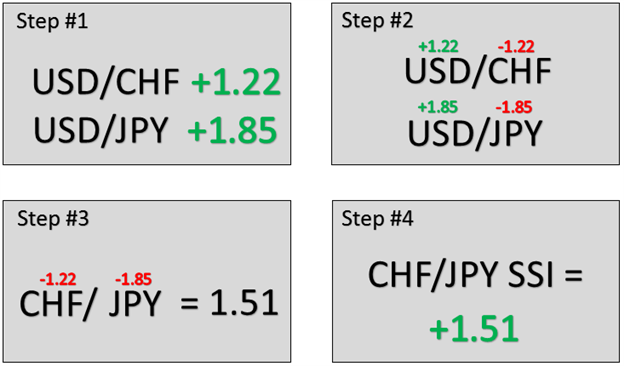 This example is the most difficult. Both the CHF and the JPY are the 2nd currency when paired up with the USD, this means they each adopt the opposite sign. Because both the CHF and JPY are the same sign, we must divide the larger SSI (1.85) by the smaller SSI (1.22). The SSI for CHF/JPY is positive because the CHF had the smaller SSI of the two currencies so we must adopt the opposite sign.

This advanced technique opens the door to sentiment trading on a large amount of pairs not otherwise available and can take your trading to next level. Rather than looking at only trading currencies against the USD, we can now pair together strong and weak sentiment currencies with each other for a sentiment trade stronger than their USD-pair counterparts. To test out your SSI based trades, be sure to sign up for Free Forex Demo account.