What You Need To Know About Your Trade Position Size Strategy

-Why Traders Need to Focus on Position Sizing

-Can You Maximize Profits By Adding To Losses?

“It is foolhardy to make a second trade, if your first trade shows you a loss. Never average losses. Let this thought be written indelibly upon your mind.”

Do you think if you’ve unfortunately placed five losing trades in a row that the next one is due to be a winner? If so, you’re likely prone to overleveraging that 6th trade, thinking it will be profitable. If it becomes a loss again, you will soon find your promising Forex career coming closer to an unnecessary end. Instead, it’s best to focus on calming potential frustrations as a trader and not place too much emphasis on one trade unless it’s winning big, in which you can look to take advantage of adding to that trade at opportune times.

Why Traders Need to Focus on Position Sizing

With a relatively fixed account balance to start trading any market, you must focus on the position size you will have on each trade. You’ve likely heard the phrase, ‘cut your losses short and let your winners ride,’ but many traders make a key mistake. That mistake is that they often add to losing trades trying to buy the bottom in a downtrend and do so with more leverage which is effectively known as the Martingale approach.

Many successful traders have a few key components of their trading strategy in common. For example in the book, Market Wizards, by Jack Schwager, most successful traders feel that any person can place a winning trade, but unless you can control risk, you have little chance at overall success. Here are some of my favorite quotes:

"You have to minimize your losses and try to preserve capital for those very few instances where you can make a lot in a very short period of time. What you can’t afford to do is throw away your capital on suboptimal trades."-- Richard Dennis

Also interviewed in the book of Market Wizards, Dr. Van K. Tharp discusses the mental aspect around making decisions in controlling risk and reducing trading risk. Those are simply a few examples of many other traders who have come to realization that in due time, managing your position size to control market risk becomes more important than what triggers your entry into a trade. When we analyzed over 12,000,000 live traders in our Traits of Successful Traders report, we also found that position size / leverage were a key component of overall success.

Learn Forex: Position Size & Leverage Are a Key Determinate of Your Success 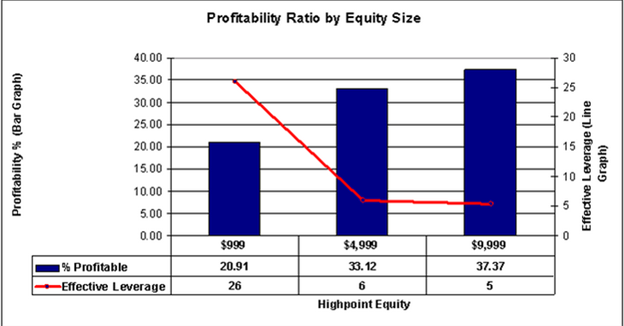 Courtesy of, How Much Capital Should I Trade Forex With?

There are two common position sizing systems that you should know about so that you can avoid one and consider the other. The most popular system is known as the Martingale, whereby you add to a losing trade in the hope of lowering your average entry price which requires a smaller move in your favor to break even. The Martingale entries are usually staged at fixed increments of 50 or 100 pips but as you’ll soon see, one small trade can soon wipe out your account.

The other system is known as the Anti-Martingale. An impressive number of fund managers and successful traders utilize the Anti-Martingale whereby you add only to winning trades. The Anti-Martingale takes on the assumption that adding to a losing trade will drain your account and you should only look to capitalize on a winning streak or trend and thereby, ‘let your profits run and cut your losses short.’

When you’re in the heat of the moment, the Martingale system feels like such an approach would work. However, from a mathematic model perspective, the Martingale leads to sure ruin eventually and all it takes is one strong trend that you’re on the wrong side of. Here’s a breakdown of the volatile equity swings that can take place when an account employs the Martingale system.

This example shows a profitable example but it’s helpful to think on this question. What would happen if you had a string of 10 losing trades in a row? It could happen and if you were adding to each loss of 100 pips hoping that it would eventually turn around, then you could be facing a Margin Call due to the inherent fallacy of this strategy.

You can easily get into trouble with the Martingale approach when you think that a trend can’t continue. Of course, it wouldn’t take long to find multiple examples of times when an imbalance in monetary policy caused a huge shift in the market and a new trend is born. Here is a recent example of USDCAD which pushed 650 pips in a few months without retracing more than a hundred pips on its push higher until recently.

Learn Forex: The Recent USDCAD Trend Shows How Quickly the Martingale Can Blow-Up

This argument against the martingale approach whereby you add to losing trades begs a simple question. If this system is so popular, is there any situation where it does work? In my experience, there are two scenarios where Martingale can work. In a strict range bound market, it can work well but one breakout out of the range against your positions will wipe you out in due time. The second scenario is if the trader has unlimited capital.

Can You Maximize Profits By Adding To Losses?

Adding to your losses is a harmful strategy that can work in the short-term but has a very poor long-term track record. If your trade is losing, the most likely scenario is that your analysis was off or your timing was off but either way, it’s costing you money to stay in the trade and the best move is to exit the trade until the waters calm and you can make sense of the overall landscape. To grow your account, you should be advised to focus only on trading in a way that has a mathematical probability of growing your account and not trading to prove that you’re smart. If you take your trading beyond the p/l and make a winning or losing trade as emotional validation, then you could quickly become a martyr of your own faulty analysis.

Next: Manage Stops Like a Professional: Price Channels (13 of 50)

Previous: How to Scale Out of Positions