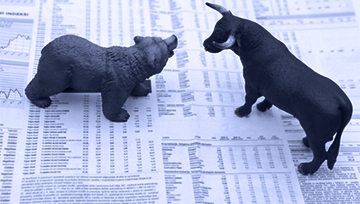 How Much Capital Should I Trade Forex With?

Summary: Research shows that the amount of capital in your trading account can affect your profitability. Traders with at least $5,000 of capital tend to utilize more conservative amounts of leverage. Traders should look to use an effective leverage of 10-to1 or less.

In looking at the trading records of tens of thousands of clients from a major FX broker, as well as talking with even more traders daily via live webinars, Twitter, and email, it appears that traders enter the Forex market with a desire to cap their potential for losses on their risk based capital. Therefore, many newer traders choose to start trading forex with a small capital base.

What we have found out through the analysis of thousands of trading accounts is that traders with larger account balances tend to be profitable on a higher percentage of trades. We feel this is a result of the EFFECTIVE LEVERAGE used in the trading account.

Since many smaller traders are inexperienced in trading forex, they tend to expose their account to significantly higher levels of effective leverage. As a result, this increase in leverage can magnify losses in their trading account. Emotionally spent, traders then either give up on forex or choose to compound the issue by continuing to trade in relatively high amounts of effective leverage. This becomes a vicious cycle that damages the enthusiasm which attracted the trader to forex.

No matter how good or bad your strategy is, your decision (or non-decision, as the case may be) about effective leverage has direct and powerful effects on the outcomes of your trading. Last year, we published some tests showing the results over time of the same strategy with different leverage. You can read it in the article Forex Trading: Controlling Leverage and Margin. 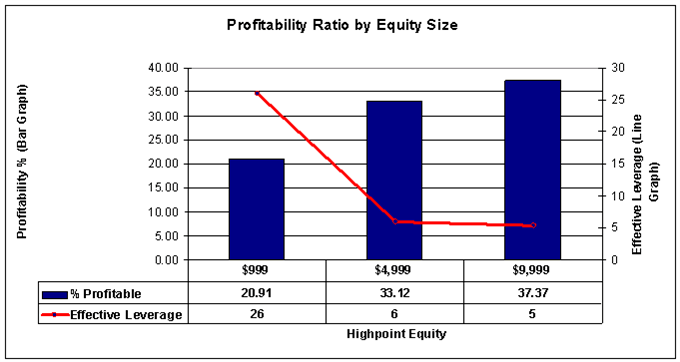 As the effective leverage dropped significantly from the $999 group to the $4,999 group (red line), the resulting proportion of profitable accounts increased dramatically by 12 basis points (blue bars). Then, as further capital is added to the accounts such that they moved into the $9,999 category, the effective leverage continued to incrementally drop pushing the profitability ratio even higher to 37%.

Game Plan: How much effective leverage should I use?

We recommend trading with effective leverage of 10 to 1 or less. We don’t know when the market conditions will change causing our strategy to take on losses. Therefore, keep the effective leverage at conservative levels while using a stop loss on all trades. Here is a simple calculation to help you determine a target trade size based on your account equity.

The above illustration shows a trader’s account size and the maximum trade size based on 10 to 1 leverage. That means if you have $10,000 in your account, then never have more than 100,000 of open trades at any one time.

The precise amount of leverage used is decided entirely by each individual trader. You may decide that you are more comfortable using an even lower effective leverage such as 5 to 1 or 3 to 1.

Adjusting the effective leverage to suit your risk tolerance

Our research indicates that accounts with the smallest capital base (the group labeled $999) have an average trade size of 26k for each trade. Their effective leverage is at least 26 times which is significantly higher than the 10 times leverage discussed earlier. If these traders want to trade at no more than a 10 to 1 effective leverage, they would need to make at least one of the adjustments noted below:

Increase their trading account equity by depositing more funds to an amount that reduces their effective leverage to less than 10 to 1. So our average trader, who is averaging 26k trade sizes, would need at least $2,600 in their account to trade 26k on a 10 to 1 effective leverage.

Decrease their trade size to a level that reduces their effective leverage to less than 10 to 1. Use the figure 3 calculations and chart above. 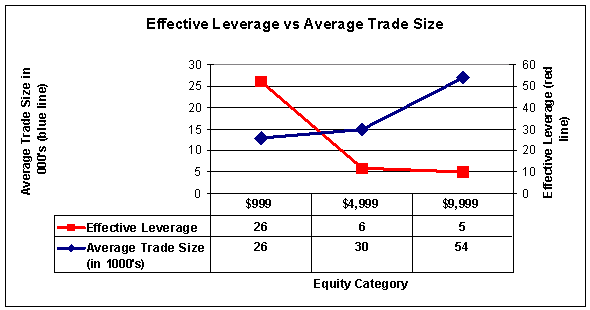 In the chart above, notice how the trade size remains relatively stable as the account equity increases from the $999 group to the $4,999 group. In essence, this indicates that traders are looking for, on average, at least $2.60 per pip (if they average 26k trade size, that is approximately $2.60 p/l per pip in most currency pairs).

There could be many reasons why traders average at least 26k for each trade, or $2.60 per pip. Perhaps they want a large enough trade size to make their time invested trading worthwhile. In other words, traders may be seeking a price per pip value and $2.60 is the minimum threshold on average. If these traders were to use no more than 10 to 1 effective leverage, they would need at least $2,600 in their account to support $2.60 per pip.

Another possibility is that many newer traders simply don’t understand the power of leverage and how one large losing trade can wipe out several winning trades in a row. Using a conservative amount of leverage will help slow down the rate of capital losses when a trader goes through a losing streak.

Regardless of the reasons, our goal is to use conservative amounts of leverage. If you know how much risk capital you have available, then use the chart and calculations used in Figure 3 to determine an trade size appropriate to your account size.

If you have a target “per pip” value, then use the calculations in figure 5 to determine the minimum amount of account capital needed to support your trade size. Increasing your capital base does not mean you will become more profitable. It means that you can stay in a trade longer if it goes against you. On average, traders that use a combination of sufficient capital (at least $5,000) and conservative use of effective leverage (10 to 1 or less) tend to be more profitable.

Next: The Professional vs. Amateur's Reaction to a Losing Trade (8 of 50)

Previous: The ABC's of Risk Management

Does DailyFX have any resources for new Forex traders?

Take a look at our New2Forex page which outlines the fundementals of Forex trading. Our DailyFX expert analysts have compiled a comprehensive guide on Forex trading which is a must read for all traders beginner and experienced alike.

The DailyFX Course Instructors have years of experience trading the markets and helping thousands of new traders learn forex.

How to Determine Appropriate Effective Leverage

Arriving at a Risk/Reward Ratio

Would You Like to Increase Your Chances of Becoming a Successful Trader?