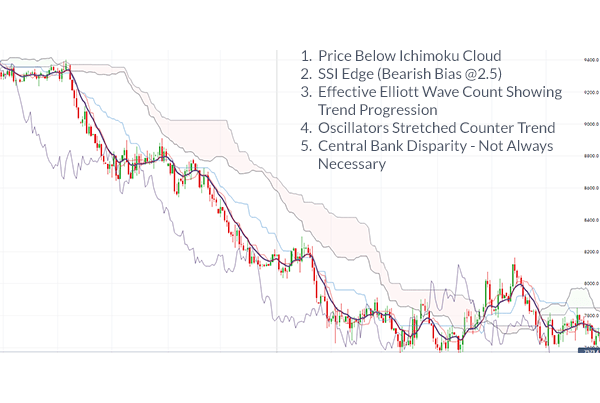 The Truth about Trading That Can Calm Your Frustrations

It’s natural for you to look profitable FX traders to see what type of trading methodology you should take on. Because, you figure, if James Stanley is making money on the Finger Trap strategy, then that’s obviously the way to go right? But if he’s doing well with such a short-term methodology, why is Jeremy Wagner knocking out big moves with Elliott Wave & Donchian Channels? The answer to this question is that the truth about trading lies less is where to buy and more in deciding where you’re wrong and should get out of the trade.

Where to Buy Is a Small Part of the Puzzle

Of course, you should have an idea where is a good time to enter into a trade. I consider this an edge, when your entry has a better chance or probability of profit than a random entry. The most common of edges that you’ll hear us address at DailyFX is trading with the trend and when reasonable fading the crowd bias with our Sentiment Index. More importantly, it’s best to write down the key things that build your edge so that before you can objectify your edge and not be swayed by emotions before jumping in a trade.

Learn Forex: My Checklist for Entering a Trade

With my objective edge checklist displayed on the AUDUSD chart above it’s important that you understand that it doesn’t hold the path to riches but it is important. The importance lies in that you’re not being pulled by the latest news headline or largest candle on the chart which could just be a few large orders going through that doesn’t break the overall trend. In fact, a great investor of the 20th century, Sir John Templeton, used to keep a list of investments he’d make if a price got to a certain price and give it to an associate to enter orders so that he would not be dismayed by the news around that time and in effect keeping his buying objective when it was easier to be subjective.

The Bottom Line: You need to have an objective way of identifying the edge but getting into the trade isn’t nearly as important as getting out of the trade at appropriate points.

Learn How to Take Small Losses Early Is Key

If you decided to set out and learn the investing secrets of the top traders in the world, you’d likely end up more confused than when you started. The reason for the confusion is that you may read the great Paul Tudor Jones, who stated, “I believe the very best money is made at the market turns. Everyone says you get killed trying to pick tops and bottoms and you make all your money by playing the trend in the middle. Well for twelve years I have been missing the meat in the middle but I have made a lot of money at tops and bottoms."That could easily get you excited about learning how to read market turns but just as quickly, you may read Bernard Baruch stating, “Don't try to buy at the bottom and sell at the top. It can't be done except by liars.” or “I made my money by selling too soon,” which was in context of catching the meat of a move.

Learn Forex: Decide Where Your Trade Is Wrong before Deciding Where You’re Right 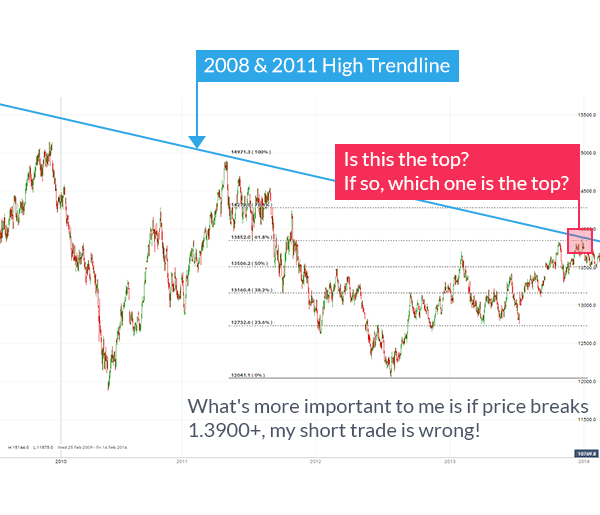 You’ll notice in the chart above that I don’t know if EURUSD will go to 1.3200, 1.2400, or lower but I know if EURUSD breaks above 1.3900 which is the trendline resistance that I do not belong in a short trade. Deciding and honoring your exit point is a very tough but critical point in trading and why two traders can be very successful but have completely different ways of entering into a trade. In other words, if one guy is doing great picking tops and bottoms and another is doing great catching the meat of the move then the common denominator of these professional traders is their ability to decide when they are wrong on the trade as per their analysis for getting in in the first place.

The Bottom Line: There are many roads that lead to trading well but there is only one highway to trading poorly and that is letting the market trade past your conviction point for getting into a trade. Make sure you know at what price you should no longer have your capital at risk or else you’re just gambling.

Focus on Good Decisions More Than If You’re Right / Wrong

It’s easy to close a profitable trade and think that you were right on your call or close out a losing trade and say you were wrong on the trade but that can be a harmful way of thinking. The harm comes from the fact that when you entered the trade, you may have an objective edge as we discussed earlier but you obviously didn’t know whether you’re trade would close at a profit or loss (or else, you’d never enter a losing trade again). What’s a more appropriate way to look at any trade is making sure that it’s based on good and methodical decisions because a decision is based on collecting the present data and putting the best foot (buy, sell, flat) forward, which is a fair definition of trading.

As you can imagine, in all of life, we’re always making decisions. When you’ve made a bad decision, in trading as in most of life, you’re best served in recognizing when the decision did not turn out as you hoped and changing your course of action as soon as possible. What can be harmful, is when you tied every decision you make to your ego so that you wait for the circumstances to hopefully turn so that you’re hopefully proven right and your ego is protected. This hope has cost many traders their career and I hope this article prevents anyone from repeating this mental error in 2014.

Adjust your thinking on trading so that you see loss control and objective decision making that protects your capital as the cornerstone of your trading while see an entry price in less esteem as you may have earlier in your career. That is the truth of trading.

Next: Just One of a Thousand Insignificant Little Trades (38 of 48)