It is no secret that USD pairs have been difficult to trade through the start of 2012. There are pairs like the GBPUSD pictured below reaching out to new 2012 highs today, moving over 900 pips off yearly lows. Other Dollar pairs such as the USDCAD and NZDUSD have been trapped in a range bound environment. Looking to the AUDUSD and EURUSD currency pairs simply add to the confusion, as they fail to create new highs and lows and ultimately lack direction. With many of the majors heading in different directions, traders can reach out to the Dow Jones FXCM Dollar Index for guidance.

Taking a look at the Dollar Index we can see a familiar triangle pattern developing. This pattern is very similar to the graph traded yesterday during the April 17th edition of Chart Of The Day. Our triangle is formed by finding resistance, connecting the March 16th, and April 4th and 13th highs. Support is formed near 9,900 by a series of wicks from March 27th, April 3rd and 12th. Using our knowledge of triangle trading, even if we are confused by the direction of the USD we can use entry orders waiting for a breakout.

Savvy traders can also move back to trading their favorite major pairs once a directional bias is formed on the USDollar Index. Waiting for the index to break a move below support would signal general weakness in pairs such as the EURUSD. While a break of resistance would influence our bias toward higher highs and we would look for a bullish dollar sentiment in the market. 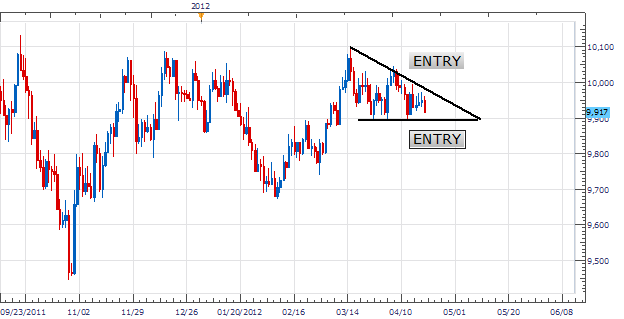 My preference is to sell a breakout of our triangle over resistance or under support. Suggested sell Enties should be placed near 9875 with buy Entries above 10,050. Risk/ Reward ratios can be adjusted with stops placed under new support (breakout above) / above new resistance (breakout below) depending on the directional nature of the move.

Alternative scenarios include prices continuing to consolidate prior to a breakout.