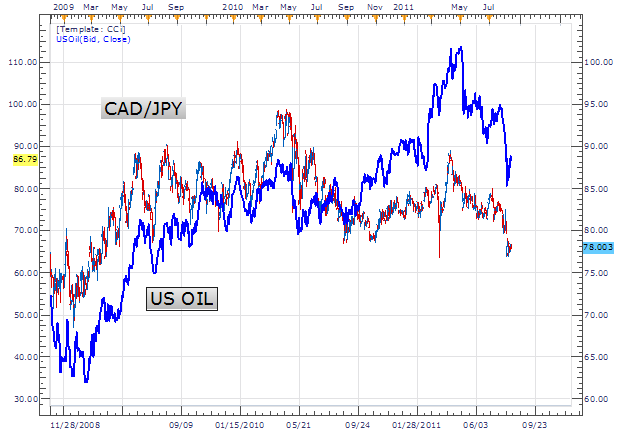 CAD/JPY to Trend on USOil Correlation

The CAD/JPY has temporarily stalled its four month down trend from its April 2011 high at 89.54. The pair has recently carved out a monthly low at 76.78 just 6 pips shy of the 2011 low established in March. This price is widely considered psychological as this is where previous intervention occurred on behalf of the Japanese Yen.

One factor to consider is that the CAD/JPY is also highly correlated with USOIL. Below you will find two years worth of data comparing the two assets. As economies around the globe are grinding to a halt we have seen a decrease in demand for oil. This has caused USOIL to drop off its 2011 high at $114.80 down to the recent August low of $75.68 a barrel. With no end in sight for a global fundamental shift we can reasonably expect this trend to continue.

Taking price in to the 4H chart we can see the CAD/JPY trading well under its 200 MVA (simple moving average), located at 81.63. Price has been consolidating since its recently established low of 76.78, but yet to break a new high. Price is being held up by short term support along our candle wicks, found at 77.80. Breakout traders can wait patiently for entry chances underneath this point on the charts. 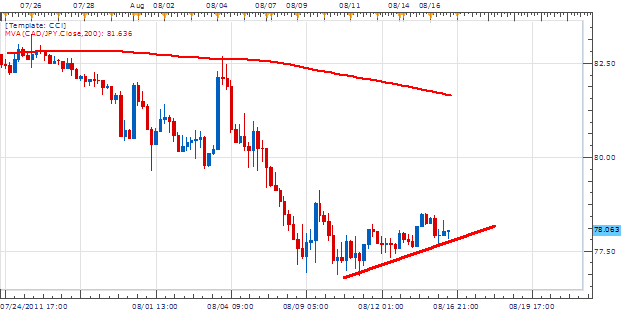 My preference is to sell the CAD/JPY on a break of the support on our 4H chart. Entrys should be placed near .77.60. Stops should be placed over the August 15th high at 78.53. Limits will target a new low at 75.74. This will establish a minimum profit of 186 pips, setting up a clear 1:2 Risk/Reward ratio.

Alternative scenarios include price continuing to trade over short term resistance towards 79.14.