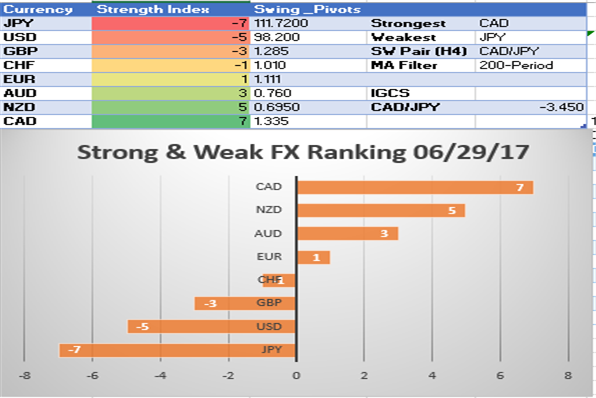 Would you like to see what our Analysts Forecast for JPY longer-term? Click here to find out here!

In my FX closing bell webinars,I have encouraged traders to focus on the weak currencies and to track the themes that are driving the weak currencies. I also make it a point to explain themes that are gaining momentum that can propel stronger currencies. One way to track developing themes is to look to correlations to see when different asset classes are moving together. Toward the end of H1 2017, Commodities are making a rebound, and specifically, we’re seeing a move higher in energy and base metals as yields move higher, which sets up a nice Intermarket Analysis backdrop to favor higher AUD/JPY.

A key commodity for any AUD trader is Iron Ore, which is a key resource for the country with two of the three largest ore miners in the world in AU. Recently, we’ve seen a pick-up in Iron Ore on the back of a speech by Chinese Premier Li Keqiang who promised to cut back on oversupply and provide confidence of China’s growth. This gave metals a boost, and on the charts, Iron Ore recently broke above the 50-DMA and is set to close higher for the month. Another impressive commodity is Copper, which is looking set to break a Trendline going back 6 years. It also doesn’t hurt that CNY is rallying.

While the RBA has not joined in on the chorus of hawkish central banks this week, the RBA is due for rate announcement at the beginning of July that could set the scene for a hawkish shift that would likely further propel the AUD. The RBA would have plenty to point to for a reason for the hawkish shift as other central bankers like Bank of Canada’s, Stephen Poloz takes a hawkish tone.

On the other side of the equation, JPY is the weakest G8 currency on a relative basis (see first chart below). Also, we’ have yet to hear from the BoJ that shows they’re joining the central bankers in taking a hawkish slant, which could keep the JPY weak and a prime provider of a shorttarget in FX.

Looking below, Strong-Weak Analysis shows CAD/JPY to be the favored trade, but a more in-depth look will show you the strong currencies are all commodity FX, which could help AUD.

On the chart below, we’ve seen an extension higher so a risk adjusted entry would be difficult at this point. Rather, I would await a pull-back to encourage a better stop relative to profit sought on the trade. The double-bottom target aligns with the 2017 high by 50 pips, which is a good first target. If AUD strength carries, there could be a preference for trend followers to have a trailing stop as opposed to exiting as the breakout gets started. 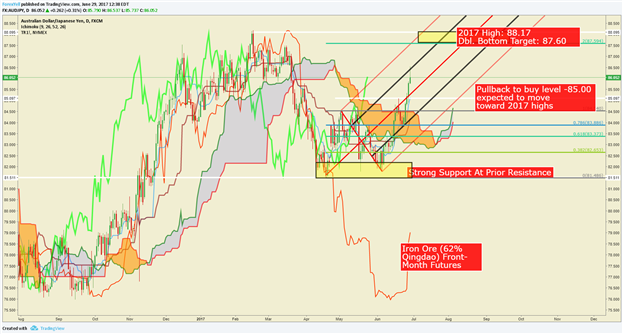