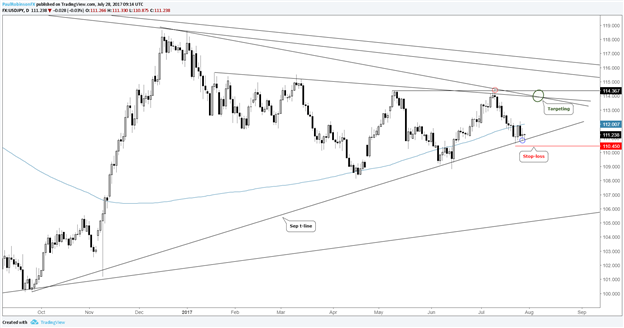 Looking for a longer-term perspective on USDJPY or another currency pair? See our Quarterly Forecasts.

USDJPY is currently putting in a thorough test of trend-line support extending back to September. It first reversed off the trend-line on Friday, drove higher only to reverse back lower following the FOMC. This put yesterday’s price action in the spot-light, and with that we saw another bounce off the trend-line.

From a risk/reward perspective, longs at current levels are attractive given the proximity of recent lows and the next major points of resistance. There are a couple of trend-lines bearing down from higher levels, but don’t arrive until the high 11300s. This leaves ample room for profit with a relatively tight stop-loss. With stops set under the 7/21 swing-low, roughly 80 pips from here and the target about 250/75 pips higher we have potential for a trade holding a 1:3+ risk/reward profile.

A drop below noted support would not only be the point to stop out of the trade, but could usher in a stronger move lower as support doesn’t arrive until around 10900.

Later today, US GDP could impact this outlook, but if the path of least resistance is to become higher than it shouldn’t undermine this trade. For details, see the economic calendar.