After a bit of a pause, the Canadian Dollar could be back on track to appreciate from a fundamental standpoint, especially against the Japanese Yen. Last week, the Canadian Dollar rose in the aftermath of the BoC monetary policy announcement. There, the central bank reduced emergency measures, trimming its bond purchase program to CAD3 billion a week from 4 billion, or by 25%.

This makes the BoC one of the early movers amongst developed central banks to begin scaling back some of the extraordinary measures undertaken to cope with the economically damaging effects of the coronavirus. The Federal Reserve, for example, is still continuing with the pace of US$120 billion in monthly asset purchases to stimulate the economy and bolster inflation.

With that in mind, this could leave the Canadian Dollar at an advantage compared to currencies tied to relatively dovish central banks in the long run. The Bank of Japan (BoJ) is one that comes to mind, especially following this week’s monetary policy announcement. The BoJ, while upgrading GDP forecasts, still maintained its dovish stance and left policy settings unchanged.

On the chart below, recent strength in the Canadian Dollar has been associated with the markets slightly increasing BoC rate hike bets by the end of 2022. This trend may continue. Having said that, a downside risk for CAD/JPY remains a material downturn in market sentiment given the haven traits of the quote currency. But, a still-dovish Fed this week could continue reducing the downside scope for overall risk appetite. 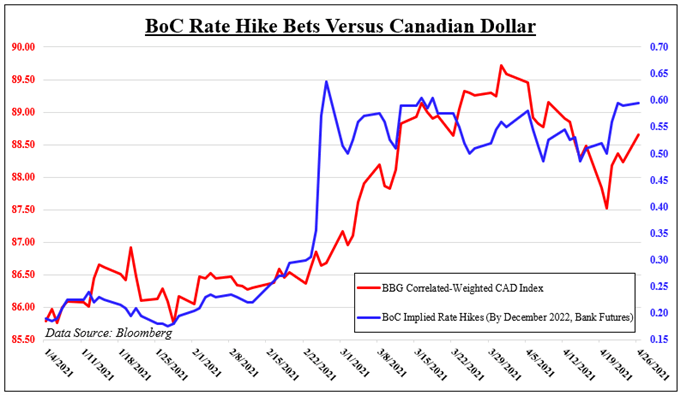 CAD/JPY closed above a near-term falling trendline from March’s top, opening the door to revisiting the 88.08 – 88.30 resistance zone. This also followed a bounce off the 50-day Simple Moving Average as it reinstated the dominant focus to the upside. Confirming a subsequent close above the minor 14.6% Fibonacci extension at 86.94 may further bolster the case to the upside.

Still, current 2021 peaks may still hold and send the pair lower. Then the 50-day SMA may come back into play as prices oscillate. Do also keep an eye on RSI, negative divergence could warn of a turn lower. Taking out peaks from March would then expose October 2018 highs. That would make for a critical zone of resistance between 88.93 and 89.21.