Canadian Dollar Price Forecast: CAD/JPY May Rise Down the Road Despite Ontario Lockdown

The Canadian Dollar has been gradually recovering from last year’s bottom, but lately its pace has been accelerating and it could be poised to benefit against the Japanese Yen in the long run. So what has been driving its strong performance? Some point to the rise in crude oil prices given it is Canada’s key export. But, I think it predominantly comes down to monetary policy expectations, as it usually does.

Taking a look at the chart below, the Canadian Dollar has been closely following increasingly less-dovish BoC monetary policy expectations. In fact, it seems futures are pricing in at least 2 rate hikes by the end of next year. This has been following the rise in longer-term government bond yields, such as in the United States and Canada, as fiscal stimulus expectations drove up growth and inflation estimates.

The cherry on top for CAD? The Bank of Canada announced earlier in March that it will be halting all remaining Covid crisis liquidity programs. While the central bank left markets guessing as to when it could start scaling back QE purchases, it certainly left the door open to it, pledging that it would be gradual. Compare this to the Bank of Japan, where Governor Haruhiko Kuroda underlined that the yield curve must remain low.

As such, bond yields in Canada may continue outperforming their Japanese counterparts, driving CAD/JPY higher. So what could be a couple of risks in the near-term? While President Joe Biden announced a smaller-than-expected US$2 trillion infrastructure package, it seems poised to come with reversing former President Donald Trump’s corporate tax cuts.

If stock market volatility picks up, the anti-risk Yen could see a comeback in the short-term. Meanwhile, Canada’s most populous province, Ontario, just announced a lockdown for 28 days to counter spreading coronavirus cases. This could cool local economic growth expectations and local bond yields. But, down the road, the broader path for CAD/JPY could still remain biased to the upside. 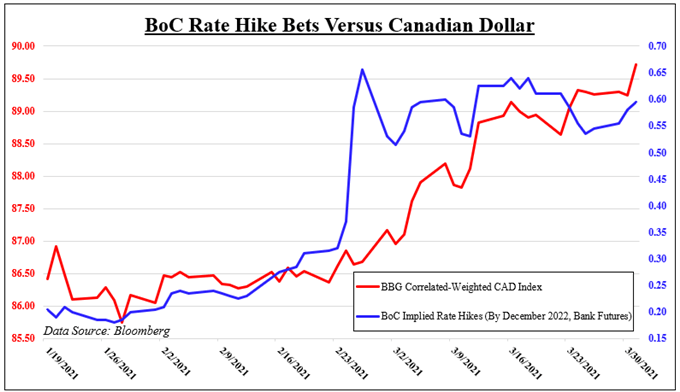 CAD/JPY just closed above the key 88.08 – 87.71 resistance zone, opening the door to resuming the dominant uptrend following a pullback during the second-half of March. Still, confirmation of a breakout is lacking. Meanwhile, negative RSI divergence is showing that upside momentum is fading. This can at times precede a turn lower.

In such an outcome, watching the 20-day Simple Moving Average (SMA) would be key. Closing under it may place the focus on the March 23 low at 86.07. Even if the latter is taken out, there remains the 50-day SMA which could reinstate the focus to the upside. If the pair continues to climb from here, it may soon find itself revisiting October 2018 highs on the way towards peaks from 2017.