The pro-risk Australian Dollar has been rallying up a storm in the aftermath of the US-China “phase one” trade deal, climbing alongside a pickup in sentiment as the S&P 500 hit record highs. With Fed officials looking to leave rates unchanged in 2020, markets may not have to worry about tightening lending conditions for the time being. This is as AUD is on the verge of key bullish technical breakouts.

Using a majors-based index, the Australian Dollar appears to be on the verge of pushing above descending resistance from July – see chart below. On average, this could spell further gains for the Aussie in the near-term. A daily close above the psychological barrier would expose levels the currency generally has not seen since November and reversing the dominant downtrend.

There is not much fundamental event risk left until 2020 apart from Chinese manufacturing PMI on December 31. China is Australia’s top trading partner and improving economic conditions out of the former could generate a knock-on impact for the latter. The data may surprise higher given that it is for the December period, speaking to rising confidence on the Sino-US trade agreement. That may boost AUD. 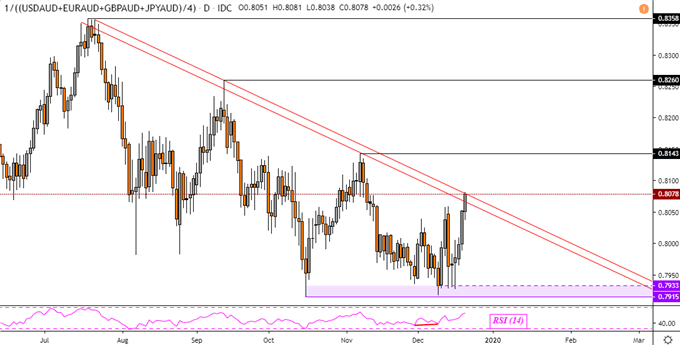 AUD/USD is once again attempting to make a push above descending resistance from the end of 2018. The previous attempt failed as prices got caught within the psychological barrier between 0.6894 and 0.6938. Confirming what could be a major reversal in trend entails a daily close this range. That could expose 0.7003 followed by the July peak at 0.7082. 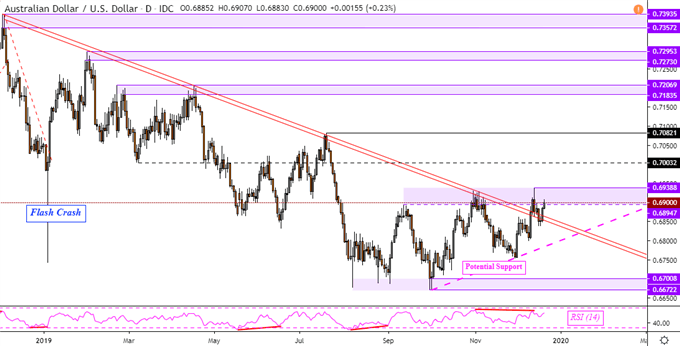 This is as GBP/AUD is approaching rising support from late July, red parallel lines on the chart below. Prices recently took out the near-term rising trend line from October and former resistance (1.9012 – 1.9093). A daily close under 1.8547, the November low, opens the door to reversing the dominant uptrend. That places the focus on the next psychological barrier between 1.8076 to 1.8148. 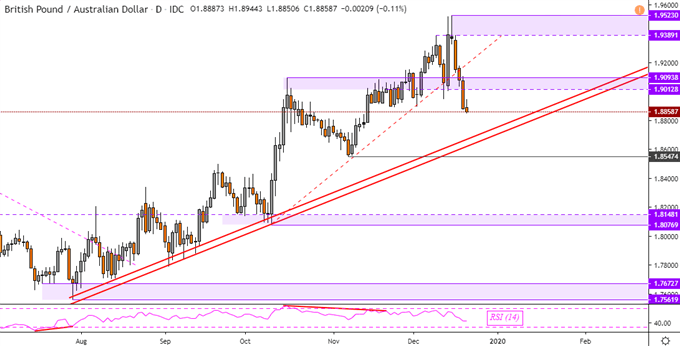 Meanwhile, AUD/JPY could be on the verge of testing the ceiling of an Ascending Triangle that has been in the making since June. This is typically a bullish chart pattern where a daily close above 75.93-76.28 could open the door to reversing the downtrend from April to late August. There is negative RSI divergence, showing fading upside momentum which may precede a decline. A push under rising support from August could pave the way for a turnaround towards November lows. 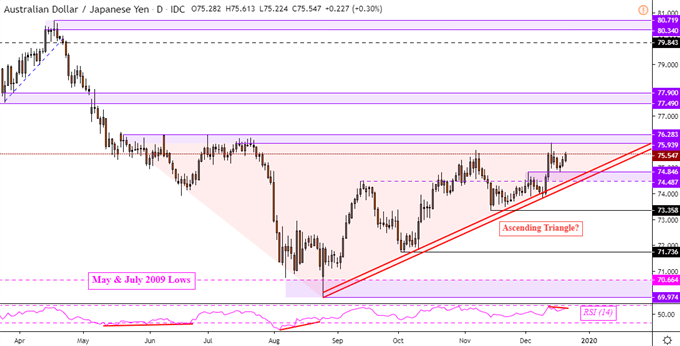