When considering the technical analysis tools to use in their charts, traders will frequently come by simple moving averages, or SMAs, and exponential moving averages, or EMAs. Both of these instruments can help market practitioners make sense of price and inform their entry and exit decisions. But how do these two indicators stack up against each other? In this piece, we’ll give the SMA vs EMA lowdown.

A Simple Moving Average (SMA) is a calculation of the average price of an asset or currency pair according to the number of periods in the range. It weights each candle and its corresponding closing price equally, with no one candle's closing price given more significance than any other candle in the equation.

An Exponential Moving Average (EMA), however, while similar, gives more weight to the most recent candles, and so this type of moving average will react faster to the most recent trading activity. While at the outset this might appear to be the best way to go, it is important to keep in mind that whenever an indicator is ‘sped up’, it will be more likely to provide more random (false) entry signals. Most traders and trading entities such as banks and hedge funds will employ the use of SMAs.

To see how these differences appear on a chart, take a look at the daily chart of the EUR/USD posted below. 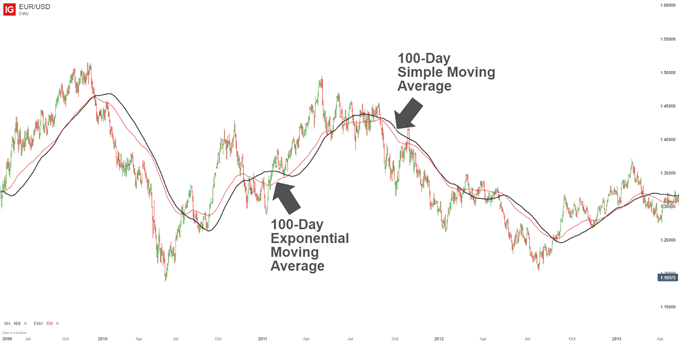 Recommended by Ben Lobel
Forex for Beginners
Get My Guide

Simple vs Exponential moving average: Which is better?

When it comes to the simple and exponential moving averages and the question of which is better, you can see that in the graphic above that there appears to be little difference between the two. Normally, the EMA will change sooner than the SMA because it emphasizes the more recent activity more than the older activity. But in this case there really is not much of a difference.

However, in general, the shorter the time frame and/or the more dramatic the price action, the greater the difference that you will see between the two MAs. Therefore, shorter-term traders might find the EMA more effective in implementing their trading strategies since it is more sensitive to the recent price movement.

New traders will play with both tools to find out which one they find to be better, and use that one in their trading approach. But the reality is that it is unlikely that one moving average will give you winning results if the other does not.

If you find that a switch from a SMA to an EMA turns a losing strategy into a winning strategy, it is probably your strategy that needs changing instead of the moving average. There is just not enough difference in the two to have that much of an impact in the results of a certain strategy. The 200-day SMA is popular for identifying the trend. If the market is above the 200-day SMA, the trend is considered to be up and if the market is below the SMA, the trend is considered down.

Short-term traders have made the 10-day EMA popular based on its use by some famous traders. But the only judge to what type of moving average to use is your account balance from month to month. If it helps your trading, then keep it – and if it does not help your trading, then look to replace it.