What is the US Dollar Index & Why is it Important?

The US Dollar Index – known as USDX, DXY, DX and USD Index – is a measure of the value of the United States Dollar (USD) against a weighted basket of currencies used by US trade partners. The index will rise if the Dollar strengthens against these currencies and fall if it weakens. Keep reading to learn more on the US Dollar Index, how it is calculated, and what affects it price.

What is the USD Index?

The US Dollar Index was started by the Federal Reserve in 1973 and has been managed by ICE Futures US since 1985. It compares the value of the US Dollar against six currencies used by major US trade partners – the Euro (EUR), Japanese Yen (JPY), Pound Sterling (GBP), Canadian Dollar (CAD), Swedish Krona (SEK) and Swiss Franc (CHF).

Before the Euro, the index also included five other European currencies. The Euro accounts for 57.6% of the weighted value (the same total percentage as the currencies it replaced); the Japanese Yen 13.6%; the Pound Sterling 11.9%; the Canadian Dollar 9.1%; the Swedish Krona 4.2%; and the Swiss Franc 3.6%.

How is the US Dollar Index Calculated?

The US Dollar Index is calculated according to the following formula, which includes a USD cross for each of the six currencies in the basket:

Why is the US Dollar Index Important for Traders?

The US Dollar Index is important for traders both as a market in its own right and as it is an indicator of the relative strength of the US Dollar around the world. It can be used in technical analysis to confirm trends related to the following markets, among others:

Commodity prices tend to fall (at least nominally) as the Dollar increases in value – and vice versa. Currency pairs, on the other hand, generally move in the same direction as the Dollar Index if USD is the base currency, and opposite direction if it is the quote currency – though these ‘rules’ do not always hold true.

For stocks and indexes the picture is more complicated, though US exporters would generally find that their exports are less competitive internationally when the Dollar is strong, and more competitive when it is weaker – with their share prices often moving to reflect changes in the Dollar’s value.

Many traders also use the index to hedge risk – for example, offsetting some of the risk associated with a long USD/JPY trade by going short on the Dollar Index.

A Brief History of the US Dollar Index

In the 1970s, the index fluctuated between 80 and 110 as the US economy struggled through recession and rapidly rising inflation. As the Federal Reserve increased interest rates to cut inflation in the late 1970s, money flowed into the US Dollar – causing the USD Index to surge. It reached 164.720 in February 1985, its highest ever level (as of 24 October 2018).

However, such a strong Dollar caused problems for US exporters, who found that their goods were no longer as competitive internationally. As a result, the US government took action to make the currency more competitive with five countries agreeing to manipulate the Dollar in the forex markets as part of the ‘Plaza Accord’. The US Dollar Index fell by 51% over the next four years.

Since then, the US Dollar Index has tracked economic performance and liquidity flows. For example, it rose as the current account generated a surplus in the 1990s, fell as US debt levels increased in the 2000s, and rallied as investors flocked to the relative safety of the Dollar during the Great Recession.

The below chart shows some of the major events that affected the USDX price since 2005. 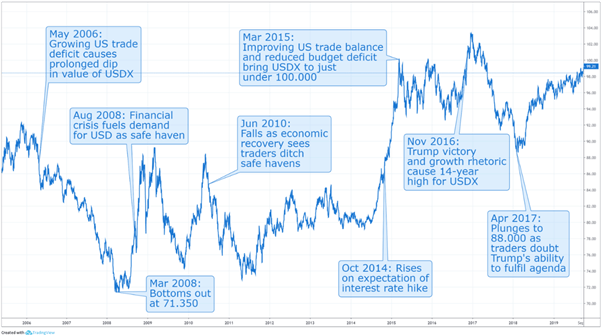 What Affects the Price of the USD Index?

The USD Index is affected by the supply of and demand for the US Dollar and currencies that make up the basket – as these factors influence the price of each currency pair in the formula used to calculate the US Dollar Index’s value.

Supply and demand for currencies is heavily influenced by the monetary policies – particularly the interest rates – set by the central bank in each country. Other factors include inflation, economic performance, credit ratings, market sentiment and foreign affairs.

How to trade the US Dollar Index

The US Dollar Index can be traded using futures and options or, where permitted, spread betting and CFD trading can also be used to speculate on whether the USDX will go up or down in price. Read more on how to trade US Dollar Index for technical strategies and tips.

Further reading on US Dollar Index

Check out the latest USD Index price with our chart and follow the latest news and analysis from our DailyFX experts.