US Debt Ceiling: a Distraction and a Warning

The US debt ceiling is largely a fiction, but unfortunately one that can have real-world consequences.

As the House Budget Committee makes clear in its explainer on the debt ceiling: “The debt ceiling does not constrain federal spending or the amount we need to borrow; it simply restricts the Treasury Department’s ability to honor financial commitments previously made by Congress and the President.”

See more about the US debt in Debt to GDP Ratio by Country.

Its main effect of the debt ceiling in recent times has been to encourage gamesmanship and brinksmanship among lawmakers – something they don’t need any encouragement to do.

How National Debt is Expected to Grow 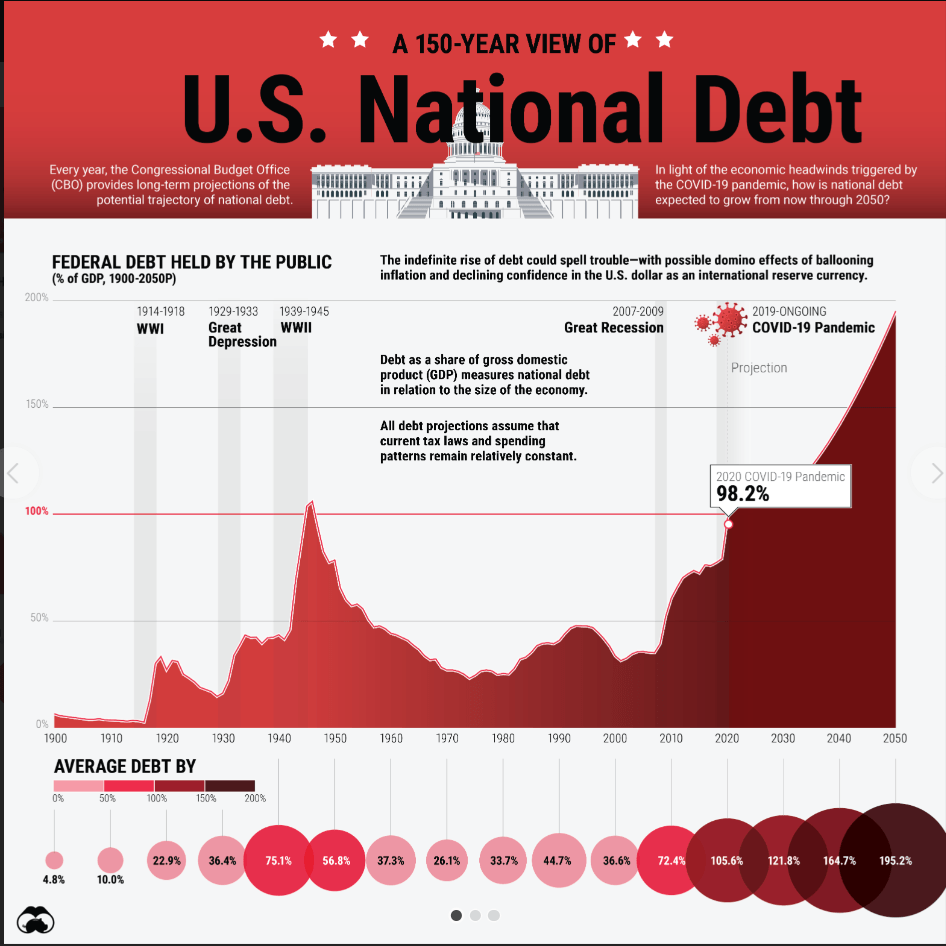 What results is a game of chicken as one or the other party holds the legendary full faith and credit of the US government hostage to gain leverage in political debate. The argument nears farcical proportions when there is a government shutdown or when the Treasury Department rattles its sabers and uses “extraordinary measures” to avoid default.

In the meantime, Congress can and does reach into its bag of tricks to suspend, extend, or raise the debt ceiling depending on its priorities. When the debt ceiling proves inconvenient, lawmakers muster the necessary majorities to fix the issue.

There were government shutdowns in 1995-96 when Congress and President Bill Clinton could not agree on spending cuts, and then in 2013 when Republicans sought to defund the Affordable Care Act. The longest shutdown was in 2018-19 over a dispute about funding the border wall.

The debt ceiling was raised routinely in 2014, 2015, and 2017, and then in 2018 suspended for 13 months, to be reinstated and raised afterwards until it was suspended for two years through July 31, 2021, and then raised to its current level of $31.4 trillion in December 2021. The Treasury Department numbers 78 separate times since 1960 that the debt ceiling has been raised, extended, or revised.

In the 2011 “crisis,” Standard & Poor’s took away the US government’s triple-A rating. Since the US federal government has set the world standard for debt for decades, that downgrade probably did more harm to S&P’s credibility than it did to US borrowing.

Debt limits – first imposed during World War I – may in fact be unconstitutional, violating the Fourteenth Amendment’s prescriptions that “the validity of the public debt of the United States, authorized by law…shall not be questioned.” No one, however, has been willing to test that theory in court.

Most other democracies do not have a debt ceiling. Rather, spending is part of the political give-and-take as the pros and cons of running a deficit are debated. Arguably, that is what happens in America’s debt-ceiling crises, though the ambiguous presence of a ceiling lends an air of artificiality to the debate.

So, what are those real-life consequences? For starters, it makes people nervous. Not too nervous, but enough to add volatility to financial markets. The US has never defaulted on its debt nor has Congress ever failed to resolve a debt ceiling crisis. For worriers, however, there is always a first time.

A debt ceiling crisis may add a few basis points to Treasury borrowing costs, and divert investors toward longer-term notes and bonds. But this also happens when the Federal Reserve is about to raise interest rates.

There are the occasional government shutdowns, which can also result when funding is not appropriated in time. Congress usually handles the funding issue by simply passing a continuing resolution to extend current funding. Government employees are now guaranteed to be made whole once the shutdown is over.

The House Budget Committee held a hearing in February about why the debt ceiling should be abolished. Committee Chairman John Yarmuth, a Kentucky Democrat, said in his opening statement: “I cannot think of another provision of budget law that has been as misused, misunderstood, and misrepresented as much as the debt limit.”

However, Mick Mulvaney, director of the Office of Management and Budget under President Trump and a former congressman, demurred, defending the debt ceiling as the buzzer that goes off when the battery in your smoke alarm stops functioning.

“It seems like one of the overriding themes here is that you want to get rid of it because it is hard, it is messy, it is a distraction,” Mulvaney said in his testimony. “OK, yes, it probably is. So is passing a budget.”

A bill to abolish the debt ceiling was introduced in the House last year but has gone nowhere. In September testimony to Congress as another debt ceiling crisis loomed, Treasury Secretary Janet Yellen, a former chair of the Federal Reserve, backed calls to end the practice, saying it imposes an unnecessary limit on spending decisions already made.

“I believe it’s very destructive to the president and myself, the Treasury secretary, in the situation where we might be unable to pay the bills that result from those past decisions,” she said before the House Financial Services Committee.