The US Dollar Bounces Back as Recession Fears Swirl. Where to for USD?

The US Dollar recovered from an eight-month low after soft data painted a concerning picture followed by several Federal Reserve talking tough on further rate hikes.

The numbers triggered fears of a recession and Wall Street finished the cash session lower with the major indices down well over a percent. Microsoft and Amazon announcing job cuts to their workforce didn’t help the mood.

Then a cavalcade of Fed speakers reminded markets of the impending rate hikes. Some pointed to 25 basis points (bp) being the most appropriate steps while St Louis Fed President James Bullard put the case forward to tighten more aggressively.

This pushed equities lower but assisted the US Dollar. The 2s 10s Treasury curve inverted another 5bp toward -0.70% on a bull flattening.

The Japanese Yen firmed today after the trade deficit for December was ¥ -1.448 billion, better than the estimates of ¥ -1.670 billion. The easing of energy prices and the impacts of an overall weaker Yen might be contributing to a better outcome for the archipelago nation.

The Bank of Japan also announced a technical tweak to its yield curve control (YCC) program that some commentators have equated to a slight easing in policy.

After making a six-month high in the New York session, the Australian Dollar stumbled on jobs data disappointment. The unemployment rate came in at 3.5% for December rather than the 3.4% anticipated and previously. Employment fell 14.k when forecasts were for 25k to be added.

Australian Commonwealth Government Bonds (ACGB) joined long-end Treasuries yields lower with the 10-year, collapsing around 30 bp. It is trading near 3.30% against 4.1% at the end of last month.

The New Zealand Dollar also slid lower after Prime Minister Jacinta Ardern announced her resignation on February 7th. She said that she ‘did not have enough in the tank’ to continue in the role.

Crude oil is under pressure with the WTI futures contract under US$ 79 bbl while Brent has traded below US$ 84 bbl today. Gold has found some shine as it approached US$ 1,910 an ounce.

Looking ahead, ECB President Christine Lagarde will be speaking from Davos and some Fed speakers will also be crossing the wires. Later on, the US will see data on housing starts, building permits and initial jobless claims.

Recommended by Daniel McCarthy
Traits of Successful Traders
Get My Guide

The recent sell-off broke below the lower band of the 21-day simple moving average (SMA) based Bollinger Band. The close back inside the band might signal a pause in the bearish run or a potential reversal. 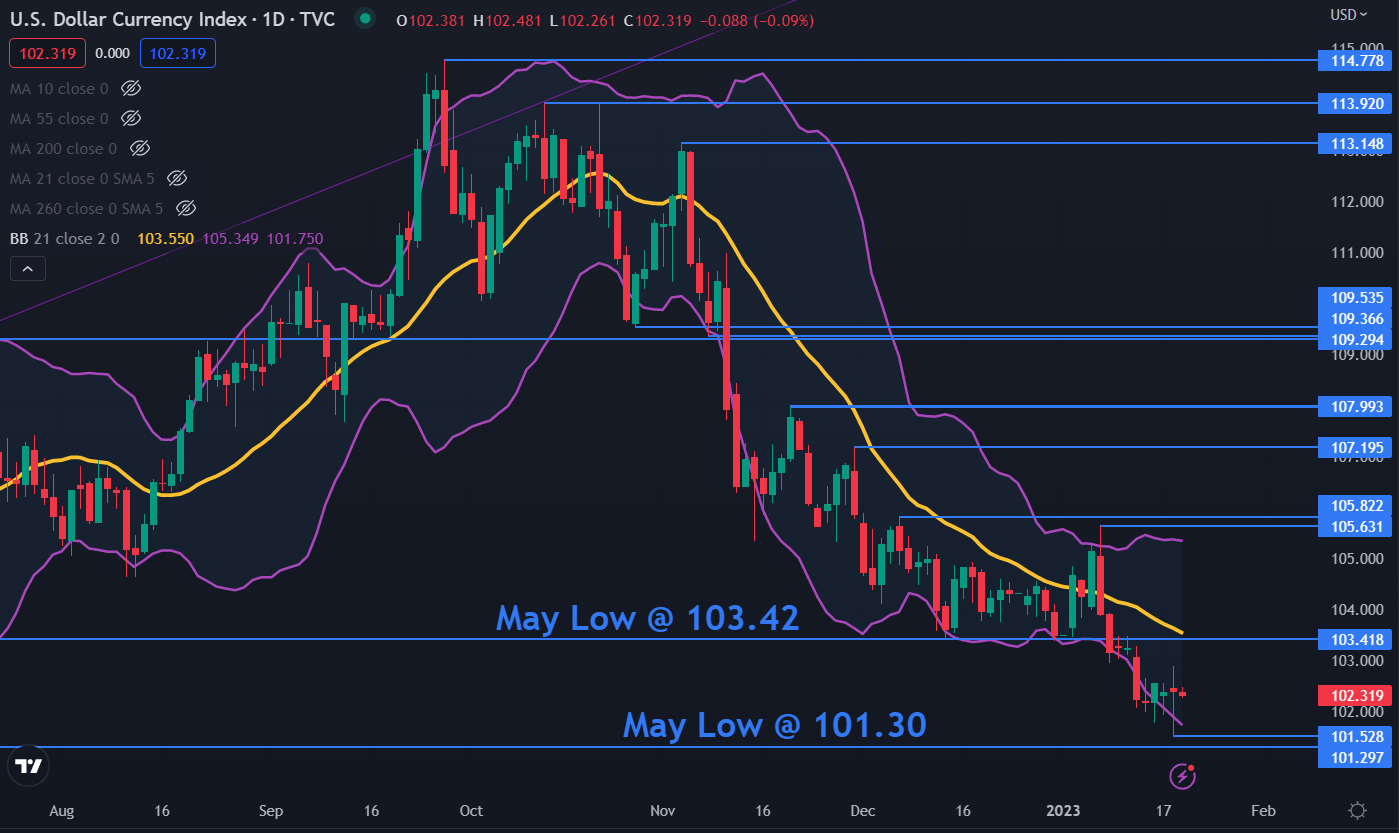