The Elliott wave pattern for silver and gold hint towards more corrective patterns. The EURUSD down trend is mature and may be approaching a pivot.

The video above is a recording of a US Opening Bell webinar from September 16, 2019. We focused on the Elliott wave patterns for key markets such as silver, gold, crude oil, DXY, EURUSD, and S&P 500.

We stated last week how silver prices look heavy and the next few weeks were going to be full of retracements and consolidation. The continued retracement last week further enhances that forecast. The Elliott wave forecast we are following is that the September 4 high was either the end of a 3rd wave that began in May 2019 or the end of an Elliott wave zigzag pattern that began November 2018. Either way, a deep or long retracement is likely underway.

If this is the end of the 3rd wave, then we are now in a 4th wave consolidation. Last week’s low pushed the bounds of such a retracement. If silver prices hold above last week’s low then we can consider the interpretation that we are in a 4th wave.

Under the zigzag wave count, it calls for a very deep and possibly complete retracement of the whole November 2018 to September 2019 up trend. The higher probability zone to watch out is $16.60-16.80. 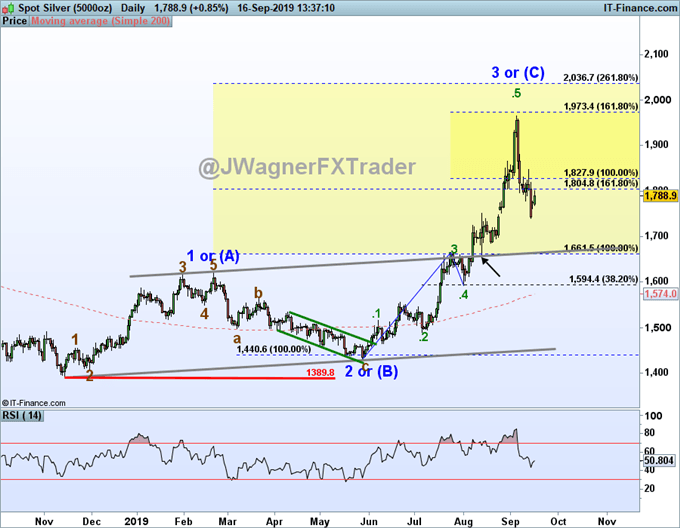 The Elliott wave gold price forecast hints towards further losses. So long as gold prices remain below $1524, additional losses may dig deeper to $1450 and possibly near $1400. If gold prices make it that far, we will need to reassess the structure of the correction to identify the higher probability pattern.

Much like silver, gold’s outlook is for continued retracement lower or consolidation. We can count the upward correction from December 2015 as over, but knowing that the push fell just short of the $1600 confluence of wave relationships, we will keep the door open for eventual continued strength.

James Stanley suggests that gold is clinging to support and additional weakness may simply push gold into longer term support. 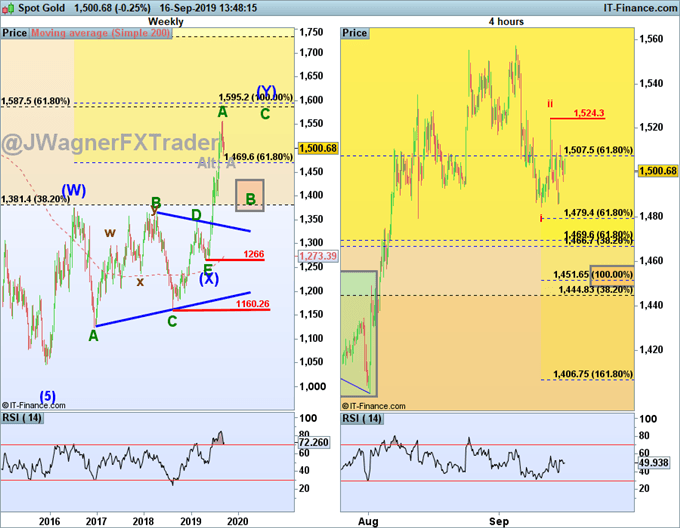 EURUSD Falls Hard and may be approaching a bullish reversal

EUR/USD continues to slowly work lower without much momentum. The EURUSD Elliott wave forecast is that we are in a terminal wave of a larger bearish wave that began February 2018. It is possible to count this wave as complete. However, the sluggish nature of the pattern may allow it to dig a little deeper.

Any dip below 1.0926 is seen as a temporary move according to the Elliott Wave Principle. Therefore, we are beginning to bias a bullish move. From not much further lower, a rally back to 1.18 and possibly higher levels (like 1.20 or 1.25) are not out of the question.

If EURUSD does break above 1.1110, then the chances improve that a low is in place. It is my opinion, that a move below 1.0926 is temporary and delays the bullish trend. If 1.0926 is met, then we will reassess the Elliott wave count accordingly.