The video above is a recording of a US Opening Bell webinar from April 29, 2019. We focused on the Elliott Wave patterns for key markets such as silver, gold, crude oil, DXY, EURUSD, USDJPY and USDCHF.

In last week’s webinar, we discussed the potential for another dip and how it may be the final dip into the bullish reversal zone of 14.40-14.80. We’ve been highlighting a dip towards 14.75 since March 4. Now that silver prices have arrived, we can count the two-month long correction as over. There is another bearish alternative that suggests another poke below the April 23 low prior to silver gathering itself for a large rally to $17 and possibly $19.

Either way, we are following an Elliott wave ending diagonal pattern since the March 21 high. When anticipating a reversal in trend, waiting for the new trend to strengthen and push above resistance (in this case) will help shift the likelihood a low has been established. In this case, the green parallel line hovering near $15.10 is the level that if broken, suggests a meaningful low has been established.

Therefore, the current Elliott wave for silver prices is that wave 2 or (B) ended last week or is nearing a terminal point. Once it finalizes, we are anticipating a multi-month bullish wave to carry to $17 and possibly $19.

Little progress has been made since April 15 and the waves do not appear motive. Therefore, we will not be surprised if silver makes a deeper cut and one more jab towards lower prices. 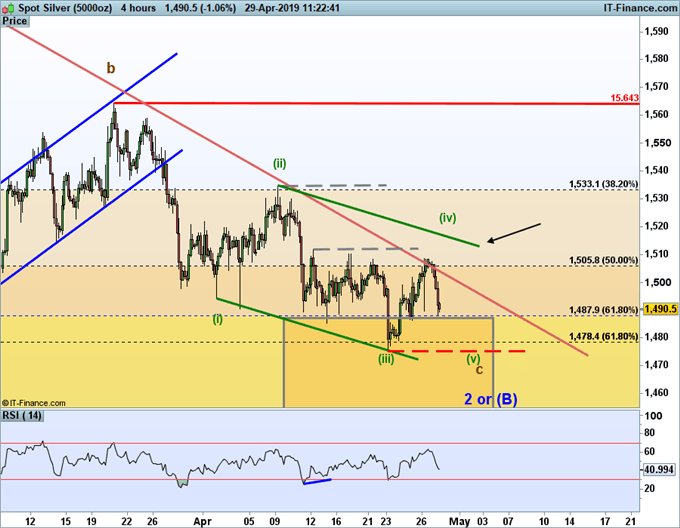 The recent fall for crude oil may initially look worrisome for the oil bulls. However, upon inspection using Elliott wave analysis we can see the recent correction applies best as a wave iv of a five wave impulse that began February 11. If this is correct, then a rally may begin from nearby levels propelling crude oil higher to retest $67 and possibly $72.

You see, fourth waves in an impulse tend to retrace approximately 38% of the third wave. Additionally, if you draw a trend line connecting the highs of wave i and wave iii, duplicate that line and place to the end of wave ii to provide an estimated distance for wave iv. In both of these guidelines above, price is very near those levels at $62.

If crude oil were to fall hard through $61, then we would need to consider a medium-term top in place at the April 23 high. We believe this is lower probability though and eye fresh highs above $67. 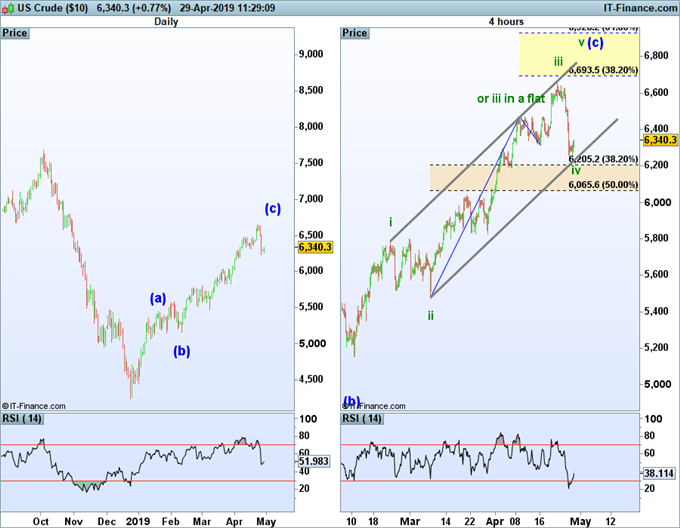 US Dollar Index Pauses at 98

The recent strength in the US Dollar Index is likely a temporary move. The depth of a DXY correction depends on how much higher the market climbs.

The preferred Elliott wave count we are following is that DXY is advancing in a (C) wave, a corrective wave. In this case, the (C) wave is a terminal wave that when it finalizes would lead to a multi-month correction in the buck.

Under the scenario described above, DXY is rallying in wave 3 of (C). Multiple wave relationships appear near 100.40-100.50. Therefore, if wave 5 of (C) can be counted as complete near 100, then we will be on alert for a large correction for US Dollar that may work down to the low and mid 80’s.

An alternative scenario we are following is that if DXY reverses now, this current high could be wave B of (B) and may only dip to 92-94. 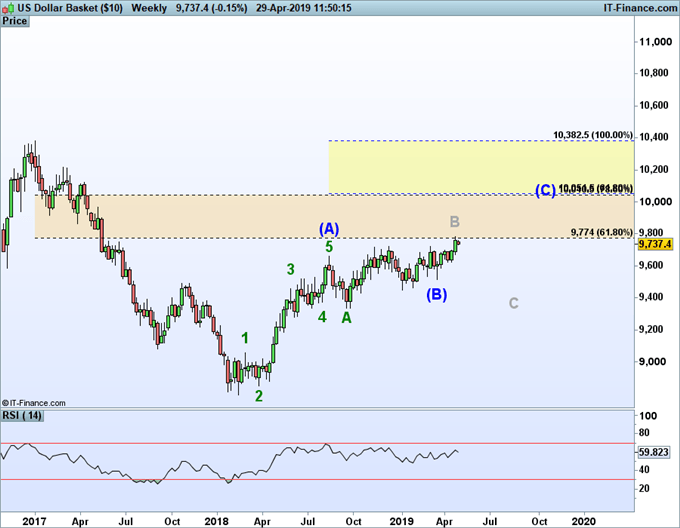