Using Elliott Wave Theory as a guide, the price charts for EUR/USD, Silver prices, and S&P 500 point towards reversals from nearby levels.

The video above is a recording of a US Opening Bell webinar from September 9, 2019. We focused on the Elliott wave patterns for key markets such as DXY, EURUSD, S&P 500, silver, and gold.

DXY reversed hard off the September 3 high which is also arriving near an important trend line. Back in February 2018, our Elliott wave model called for the largest rally since the January 2017 high. Now, that this rally has unfolded, it appears we are closing the end than the beginning of this up trend.

The high registered on September 3, can be counted as the high and US Dollar Index may be in the early stages of a multi-month down trend. We can also see another rise to a new brief high before falling to multi-month lows. Bottom line, any rise or break higher is likely to be short term as several wave relationships exist around 100. A correction back to 94 in the medium term is higher probability. The wave models diverge from there with some pointing back to 100 while others point immediately lower into the 80’s.

The longer-term Elliott wave forecast for a bearish move in DXY down to the mid and lower 80’s is alive so long as US Dollar Index holds below 104.

How to Trade US Dollar Index 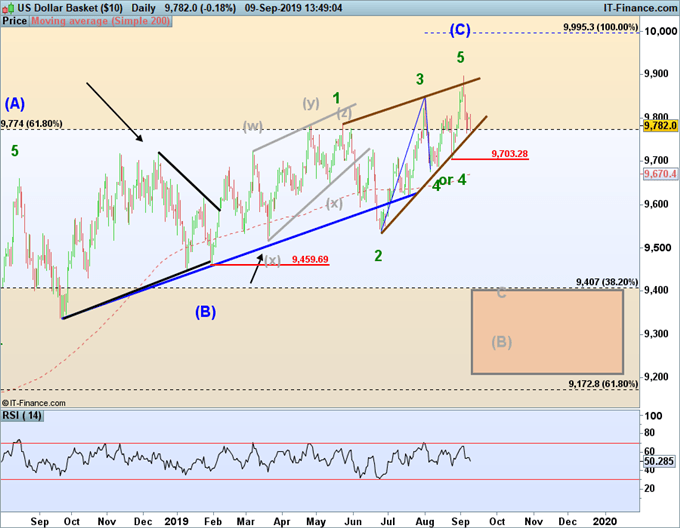 EURUSD Searches for that bottom

EUR/USD continues to grind lower without much vigor behind the move. The EURUSD Elliott wave forecast is that we are in a terminal wave of a larger bearish wave that began February 2018. It is possible to count this wave as complete. However, the sluggish nature of the pattern may allow it to dig a little deeper.

From not much further lower, a rally back to 1.18 and possibly higher levels (like 1.20 or 1.25) are not out of the question. In markets like this, I find it is best to employ breakout strategies where you identify a level of resistance and allow the market to break through the resistance to initiate the trade. That way, if the market does not break higher, then your bullish trade idea wasn’t triggered. 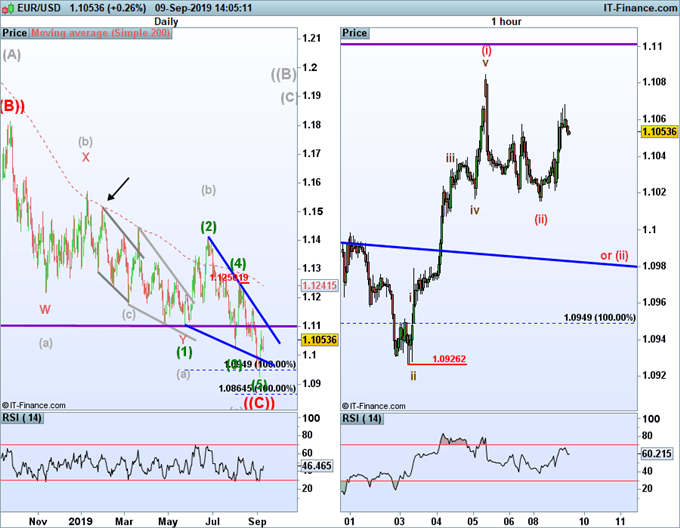 In our previous webinar, we highlighted the 2932-2974 price zone as a potential pivot area. SP500 has pushed slightly above this range earlier today only to drop back near the topside of 2974. The previous forecast from August 19 is still plausible in that SP500 pivots lower and eventually retests the December 2018 lows near 2324.

Another scenario we are keeping an eye on is that SPX500 climbing to new all-time highs in a continuation of the 2019 trend. What we do know is that if the first scenario identified above is accurate, SP500 should fall immediately without rising much beyond today’s high.

Once the bull trend started, it moved really quick to the upside. I am counting this wave higher with an extended fifth wave as the $19.65 high is near the wave relationship of $19.73. Therefore, it appears silver will be in correction mode for the next several weeks under two higher probability scenarios we are following.

First, if the trend higher still have significant juice left in it, then we will see evidence of support emerging near current levels while prices grind sideways for a few weeks. If silver prices continue falling, then another level of support may emerge near $16.60-$16.80.

If either of these prices levels fail to contain silver, then it is indicative of a 3 wave rally from the 2018 low (a corrective bounce) and that new lows are likely just down the road. 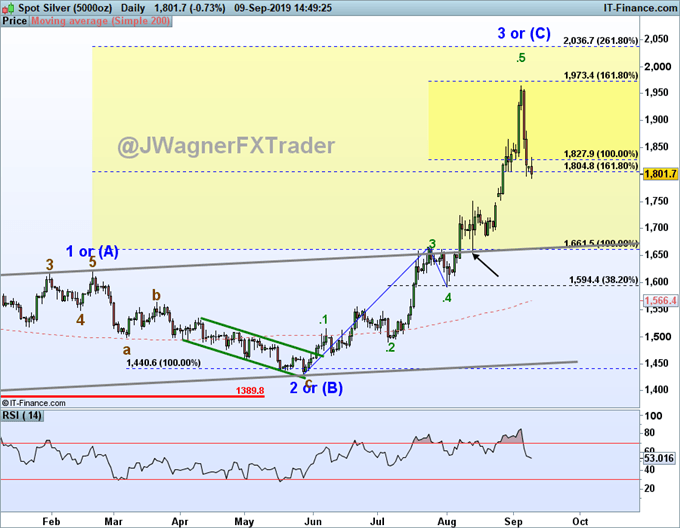