A Concentrated and Opportunistic Appetite for Risk

Despite the persistent threats of tighter financial conditions and the advance of recession risks, the benchmarks of ‘risk appetite’ that I follow have refused to succumb the pressure. In fact, amid the fundamental crush, there has been a particular resonance of speculative appetite in the usual channels of speculative reach. For my preferred, imperfect ‘one look’ measure – the S&P 500 – the pace of starts and fits continued through this past session. Despite Wednesday’s break through the week’s range to that point and the midpoint of the March to June bear leg, there was no follow through to be found the subsequent session. Under ‘normal’ market conditions technical progress can charge a measurable follow through; but the SPX actually lost ground on the day with the smallest daily trading range (as a percentage of spot) of 2022 while the five-day historical range registered similar extreme constraint. Seasonality may be contributing here, but these are extreme conditions beyond those norms. 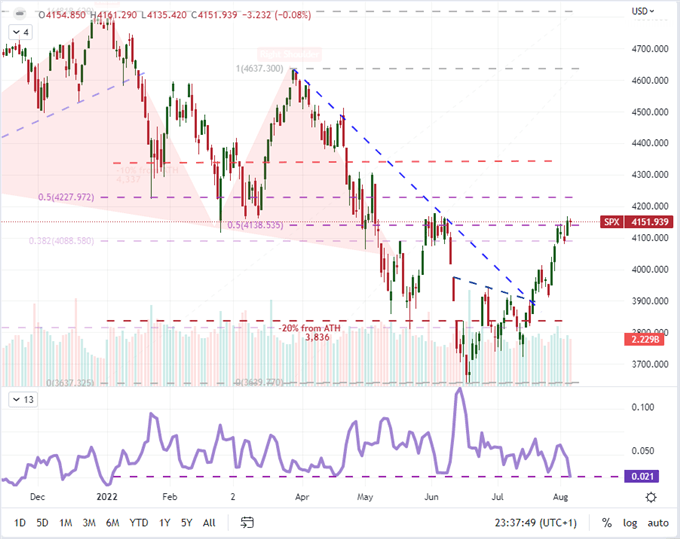 In terms of tempo, there wasn’t much more enthusiasm behind the Nasdaq 100; but there was certainly more meaningful progress. The tech-heavy index, which was a favorite outlet for equity watchers before and after the pandemic swoon, gained modestly Thursday to move within 43 points of the level that would nudge NDX to an official ‘bull market’. Similar to the definition of the technical ‘bear’, a bull market is determined by a 20 percent advance from meaningful cycle lows. In this case, I’m measuring the milestone on a close basis – which would put the milestone at 13,353. The skew towards more risk-charged likely carries more than a little responsibility for the incredible surge in AMTD Digital this past week. The Hong Kong-based tech company IPOed in the middle of July and surged more than 17,000 percent to its peak high in just a few short weeks. This run has echoes of the peak meme-stock days where speculative appetite was prolific. While opportunism breeds in complacency, the foundations for this bullish charge are far from reliable for building a systemic trend. 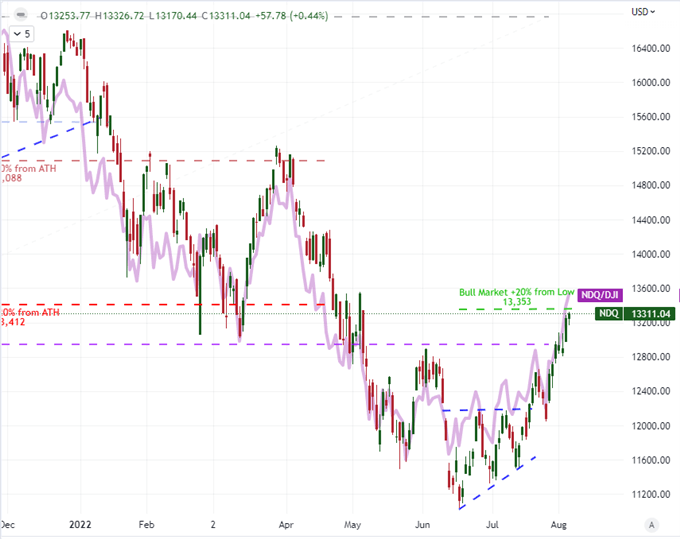 Interest Rates Are Not Feeding the Markets According to Conventional Wisdom

When a country’s benchmark rate increases, the rudimentary assumption is that the local currency benefits and capital markets feel the weight. In practice, we know that the outcome is far more influenced by the context. Heading into Thursday’s Bank of England rate decision, a 50 basis point hike – the biggest in 27 years – was the consensus forecast. Therefore, the ‘surprise’ aspect of the outcome was not present so aftermath adjustments were unnecessary. That said, a ‘mere’ half percent rate hike alone wouldn’t have led me to expect a pullback from a pair like GBPJPY where the yield differential continues to climb. Therefore, something else was at play and it seemed pretty straightforward what the motivation was: the official forecast for recession. We have had a run of major central banks update on their policies these past three to four weeks, with many hiking. Yet, there has been no overt warning that a recession is on the horizon. Generally, there is a view similar to that of the Fed where possibility of contraction is maintained but the belief remains that the policy authorities will be able to engineer a ‘soft landing’. It is likely that many more economies are likely to find themselves in a recession over the next year, but will any other central banks follow in the footsteps of the BOE and warn the markets – even if just to discount the inevitable?

Chart of GBPJPY with Highlight of BOE Rate Hikes 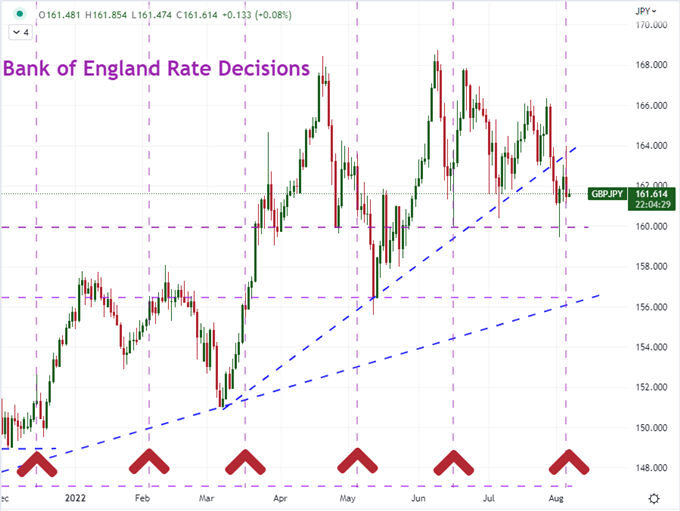 While the US is still more than a month out from the next FOMC rate decision, the response to the BOE hike brings the attention back to US and other major policy groups’ policy course. With fears of recession continuing to build a head of steam, the markets have meaningfully downgraded their forecast for the path of tightening from the US central bank. In fact, the outlook measured through swaps is now pricing in a peak around 3.50 percent by the February 2023 policy event with rate hikes seen coming later next year. Yet, that has contrasted what Fed officials have been saying in their run of speeches. It was Kashkari that said earlier this week that he finds it implausible that a cut could come in 2023 while Mester remarked this past session that she expects a peak somewhere above 4.00 percent. It is worth noting that the market’s often deviate from Fed forecasts, but this seems more than just a dispute over forecasting. It seems like the central bank is trying to warn of a shift in priorities. Keep tabs on the Dollar as it hovers just off of 20-year highs. 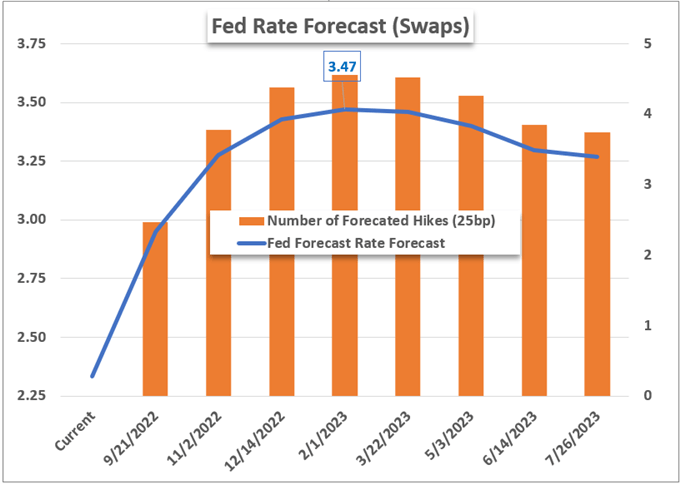 As we head into the final trading session of the week, it is easy to see what scheduled event on the docket carries more recognition than anything else around it – the NFPs – but it would be wise not to tune out the plausible, if improbable, risks not outside our comfort zone. For example, China’s response to the US House Speaker’s visit to Taiwan is disrupting the world’s principal shipping lane and leaving many on edge. Yet, for the more persistent thematic risks around overtightening interest rates and a possible recession, the July nonfarm payrolls (NFPs) update can spark either venue. There is potential for this event to print either better or worse than the 250,000 net job increase forecasted in the consensus. On the one hand, the JOLTS job openings have dropped sharply and initial jobless claims are starting to strain. Alternatively, the ISM service sector report offered up an employment gauge that signaled a noteworthy jump – though it was short of flipping positive. This is a data serious (including jobless rate, participation rate and average earnings) to watch for both ‘risk asset’ and Dollar traders. 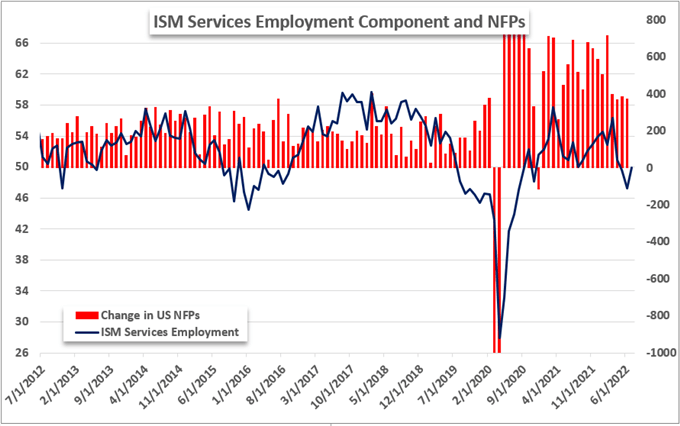 Outside of the US payrolls, there are other events scheduled for Friday release that are worthy of flagging. However, I think there is a particularly interest run in the Canadian docket between the countries employment statistics and the manufacturing activity report from Ivey. The Loonie will certainly be an interesting currency to watch. Looking into next week, the Dollar will remain a focal point of mine from the macro perspective. Between the market’s favorite inflation indicator (the CPI) and the controversial consumer sentiment survey that is just coming off of its record low in June (the UofM), we will tap systemic matters for the Greenback and US markets. 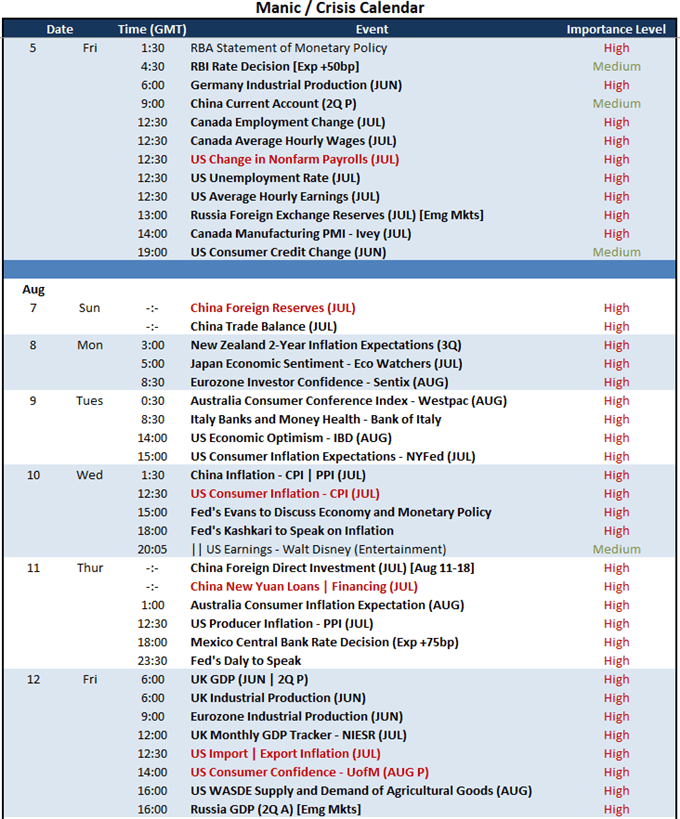