Fed Hikes and Recession Fears Soar, So Why Didn’t the Dollar and S&P 500 Run

We Have Moved the Ceiling on Market Extremes

This past session delivered a fundamental shock, but not the commensurate market fallout that would typically follow a boost in severe monetary policy moves or recession risks. The unmistakable catalyst for the day was the US consumer price index (CPI) which delivered a multi-decade high inflation reading. The fact that price pressures are elevated is not at all surprising given the trend of the past months, but the 9.1 percent headline reading pushing our historical reference back to 1981 was nevertheless a remarkable reading and higher than expected. There is little mistaking the subsequent fundamental implications this would hold as they were more than evident in the market measures that most closely track the macro implications. From Fed Fund futures, there was a sharp increase in hawkish projections. Below, the CME’s Fed Watch tool shows that the markets are pricing in a nearly 80 percent probability of a 100 bps hike from the central bank at its meeting two weeks from now where it was on outlier 8 percent chance just the day before. 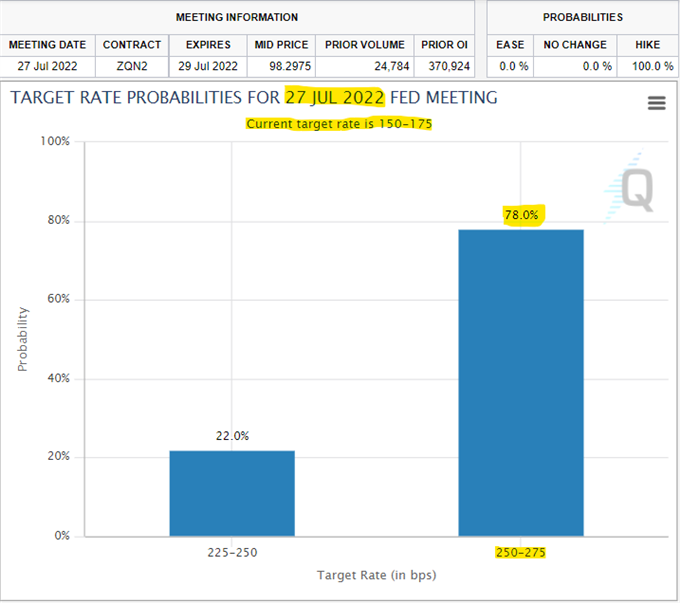 When it comes to how the implications of a sharper interest rate increase may effect a relative value asset like the US Dollar, there are some considerations which can reasonably explain why the market didn’t just take off. However, the broader considerations for traditional capital market ‘risk assets’ is broadly bad. What small caveats or silver linings may be interpreted from this development, higher interest rates and the probability of recession is not something that supports a bullish recovery. What’s more, I don’t believe that the dip into a technical ‘bear market’ by the S&P 500 fully accounts for the base case (what’s more the worst case) market adjustment moving forward. That said, the initial reaction to this news was summed up in a meaningful – but not exactly extreme – 1.0 percent gap lower on the open followed by a slow and incomplete recovery. That surprising balance was reflected on numerous risk proxies that I track from global indices to emerging market assets to junk bonds to carry trade. It wasn’t an isolated idiosyncrasy.

Chart of S&P 500 with Volume and Daily Gaps (Daily) 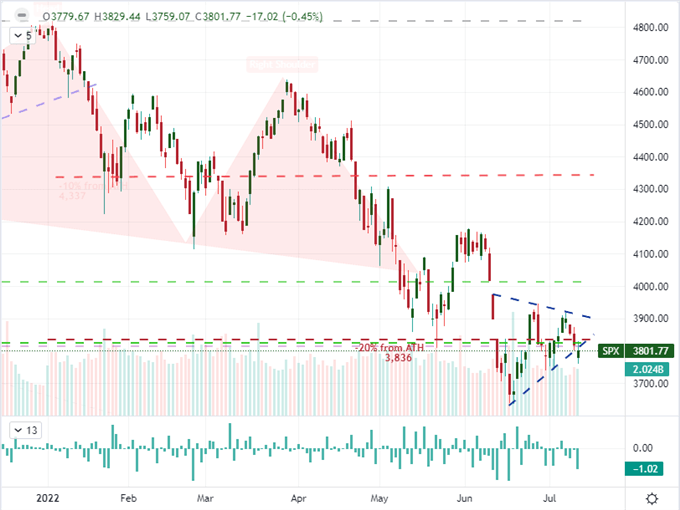 Who Wants a Small Yield When Risks are Growing Far Faster?

When it comes to the Dollar’s lack of charge on the back of the extremely hawkish shift, there are more practical forces at work. On a relative basis, we a further charge in US rate expectations does not necessarily shift the balance of pricing from where we have seen it over the previous weeks. In other words, the Dollar has rallied for the better part of a year and is thereby pricing in considerable premium in its hawkish bearing. The Greenback is at a 20 year high against the Euro, 24 year high versus the Japanese Yen and close to a 37 year peak relative to the British Pound. This may nudge up the forecast of the differential somewhat, but it doesn’t change these standings. Interestingly, this past session would also offer up the RBNZ and BOC rate hikes. The former increased its benchmark 50 basis points as expected, but the Bank of Canada surprised with a 100 basis point hike of its own. The lack of the Canadian Dollar’s own rally abides a similar principal, but it also highlights a consideration where ‘front loaded’ rate hikes may raise rates faster in the near term, but the end point for the cycle is likely to top out lower. 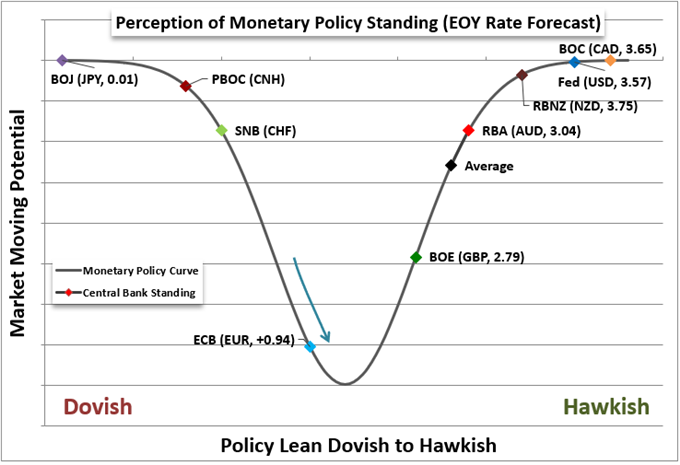 Another macro consideration that needs to be considered as we talk about jumps in benchmark rates by a whole percentage point are the conditions supporting this scale of central bank hawkishness. Inflation is running rampant and threatening to promote a recession to reign in such an extreme backdrop represents something bordering on desperation. In this kind of environment, we are facing volatility that can quickly swell to double digit territory when the yield differential we are vying for is a low single-digit figure. A good example of this imbalance risk-reward measure is EURUSD. With the Fed looking at an even more extreme hawkish forecast, there are few better foils to the Greenback than the Euro with an indecisive ECB backer. Nevertheless, EURUSD would refuse to make a meaningful effort at clearing support at the very overt parity (1.0000) level. There is no doubt a lot of speculative protection by long-term bullish interests, but there is certainly a fundamental consideration factored into this exchange rate.

Who Wants Modest Yield Differentials in a Environment Like This? 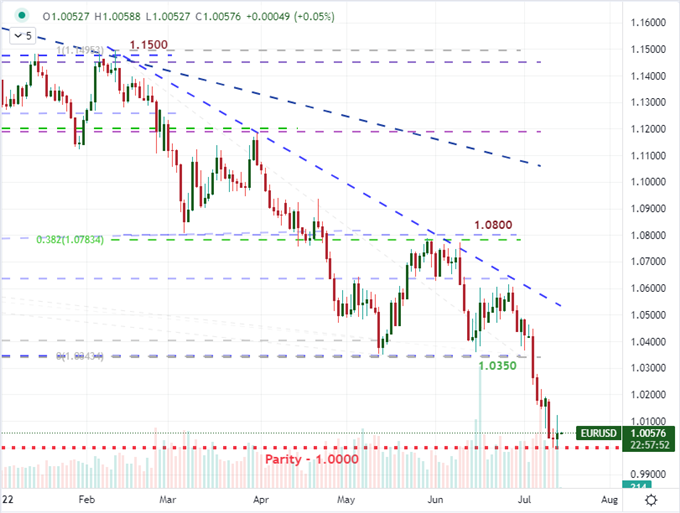 The Growing Threat of a Recession

While the immediate assessment for the FX trader after this past session’s headlines would focus on the implications for relative yield, the market participant keeping tabs on the long-term bearings would focus on the growing anticipation of recession. After this past session’s inflation reading, fears of a US and global recession increased substantially. For the world’s largest economy, the assessment of economic contraction was best defined by the investor-favorite 2-10 spread (10 year minus 2-year Treasury yield spread) which inverted by more than 20 basis points through Wednesday’s close – the steepest flip since 2000. While some may still the probability of a contraction, it seems increasingly an irrelevant debate. The scale of slump is more relevant is a more appropriate consideration in my view. 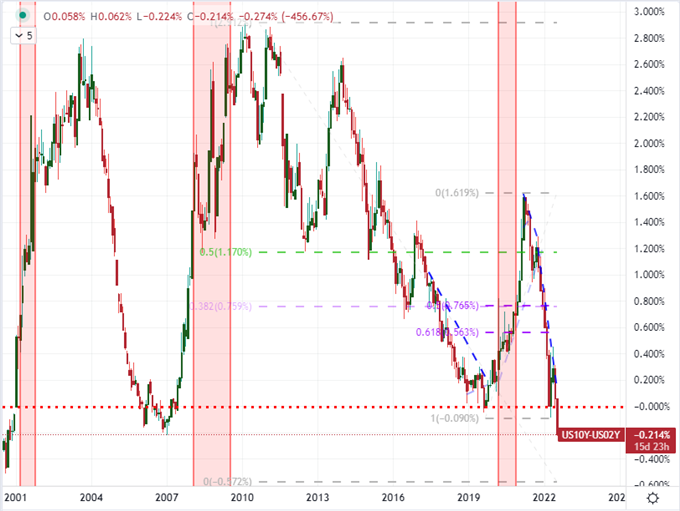 Moving into Thursday trade and through the end of week in general, my focus remains on the economic risk that feeds recession fears. While anticipation for the week-end China GDP reading and US consumer confidence report (UofM) represent the most targeted recession warnings, the interim earnings updates will represent an important update at the convergence of economic outlook, financial stability and other high-level macro matters. Most will project greater weight on JPMorgan’s numbers as the largest ‘investor’ bank, but I am putting just as much emphasis on TSM as a supply chain reflection and Conagra owing to its food inflation position for a macro perspective. All roads ultimately lead to the course of the global economy and it is worthy evaluating our interim concerns in these eventual fundamental views. 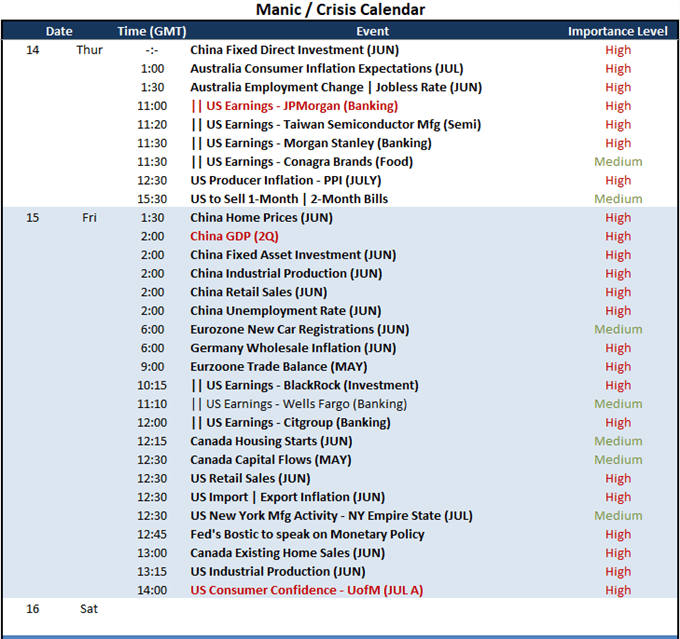