Looking out over the coming week of trading, there is plenty of unresolved fundamental pressure leering at the weakly held stability in speculative benchmarks. This past week extended the focus on the forecast in monetary policy tightening between the Reserve Bank of New Zealand (RBNZ) rate hike and the tightening of the Federal Reserve’s favorite inflation indicator. It is important to watch the relative standings of monetary policy across all the major financial centers, but to also remember that collective policy carries enormous weight over speculative buoyancy. That said, central bank deliberations are not my principal structural focus – seasonality is the flag bearer with deeply engrained assumption as to what December trade looks like. Historically, the S&P 500 extends yet another strong month through the year’s close; but there are very notable exceptions in history. Catalysts in over-extended and over-leveraged markets have a tendency to wreak no small amount of havoc. So these are top listings to watch through the coming week as possible catalysts to greater worries. 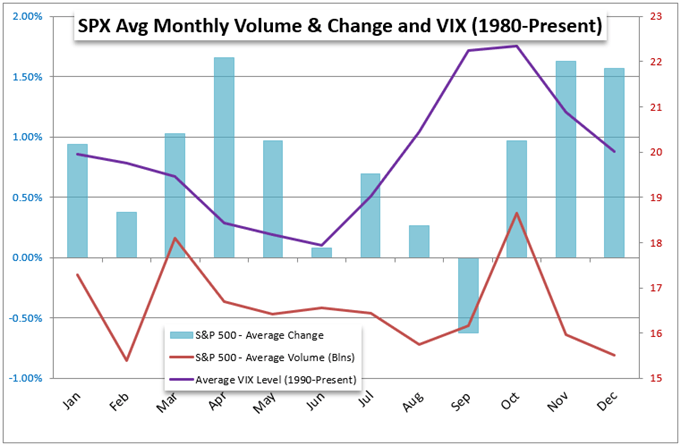 I have trimmed down the list of event risk for each day to include more of the fundamentally-important listings on tap. While there may be more localized volatility to derive from these updates, I’m most interested in the data points and events that can generate waves across the global financial system. For Monday, there isn’t much of a global footprint to find in the economic docket. That said, the Eurozone will be pressured with the German CPI giving context to the ECB’s adamancy that it will not be changing rates in 2022. Meanwhile, the Eurozone sentiment surveys for November will speak to concerns that record covid cases and deaths in multiple regional countries may in turn hamper economic health.

On Tuesday, the picture grows much more global. In the Asia session, the Chinese government’s update on manufacturing and service sector activity for the month of November will provide important contrast to the developed world’s PMI updates this past week. Few treat these numbers as sacrosanct, but the uncertainty in China between Evergrande and global relations, gives the data far greater pull. Meanwhile, planned testimony from Fed Chairman will find a market eager to ingest more insight from Powell after he received Biden’s nod, inflation soared even further and the FOMC minutes showed discussion of possible accelerating tightening. And then there is the Turkish 3Q GDP. There is more timely and sensitive data from the country – like sentiment surveys – but this core economic reading gains even greater prominence amid the unfolding currency crisis.

On Wednesday, there is a certain theme in manufacturing data. Much of the stats will be final readings for the developed world updates (Markit), but the emerging markets and United States (ISM) are an exception. In particular, the US factory activity report carries greater weight in my assessment given its reflection of upstream inflation pressures and whether companies can practical absorb those costs or will need to pass them on to the consumer. A more concentrated event risk in this session will be the 3Q Australian GDP update. This is a good potential Aussie catalyst and the ASX 200 has been in a precarious technical position. 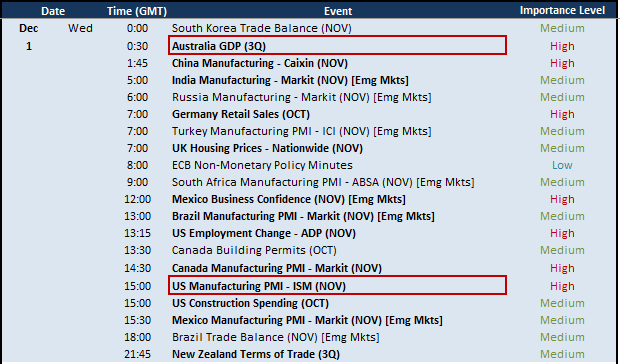 For Thursday, there is plenty of macro event risk from Australian trade numbers to Japanese consumer confidence to the Eurozone’s unemployment. As important as these all are economically; they are not particularly well known for the market-moving capacity. That said, crude oil has been particularly active amid supply-demand disputes. This past week, the US President worked with major consumer peer counterparts to garner commitment to release oil from strategic reserves around the world. OPEC members have met the effort with warnings as they intend to keep control of the oil market. That should make the OPEC and non-OPEC ministerial summit even more important. In a very different vein, earnings will also have a break in the twilight clouds with the release of numbers from Express and Dollar General. The former is a reddit board favorite from earlier in the year while the latter offers an important look into how inflation is effecting consumer habits.

Finally, Friday will be a Dollar and US market’s day in my mind. While there is plenty of event risk around emerging markets and even Canadian employment data, my attention is squarely fixed on the November NFPs. Given the most recent initial jobless claims dropping to half decade lows, I think expectations are set high. Despite that and the heavy curb on activity in anticipation of the event, I’ll be reading into this data to see if it draws any natural conclusions on whether the Fed should act faster on rates or not. As far as a picture of economic health goes, though, the US service sector activity report from the ISM is the best proxy for growth, employment and inflation in the country. Process that data even if it doesn’t offer a sharp market response in the immediate wake of its release.