Dollar Revives its Tumble as Fed and Stimulus Flounder, FAANG Ready for Earnings

Anticipation can sometimes override outright speculative fear when the upcoming event is significant enough. For the US Dollar, anticipation around the Federal Reserve rate decision this past session seemed to hit the necessary pitch to at least break up the DXY Index’s consecutive series of daily losses. However, that first advance in eight trading days wouldn’t form the basis for a reliable recovery. As was expected by most, the monetary policy authority wouldn’t adjust its mix of accommodative efforts but it would issue more distinct warnings. The ‘whatever it takes’ mentality seemed to be enough to rouse the FOMO-led S&P 500 and Nasdaq, but it certainly didn’t encourage the Greenback. 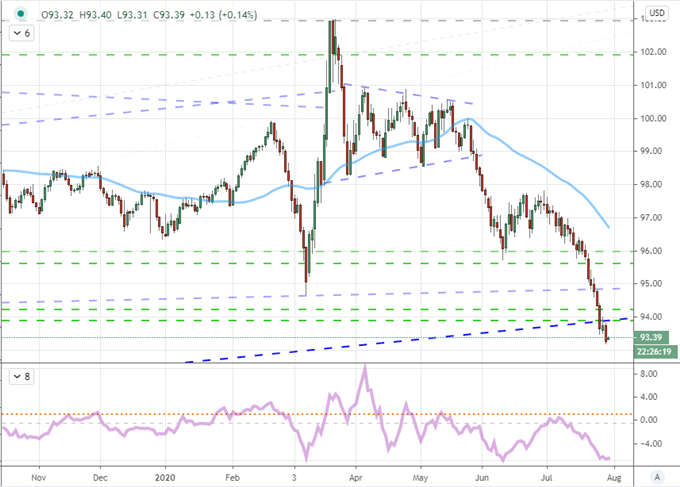 As the DXY extends the critical break of a multi-year rising trend channel, it is worth referring back to the poll I conducted asking traders on Twitter what they believed the principal reason for the currency’s struggle. There was a fairly even split for the given options, but I believe there is a connection between these factors. The separation in coronavirus cases in the US and major counterparts raises concerns of lower growth and return potential in the States which in turn necessitates more external support. That said, the hope for clarity on stimulus was throttled as headlines reported politicians were not seeing eye-to-eye on a bill and Treasury Secretary Mnuchin said Congress was “very far apart”.. 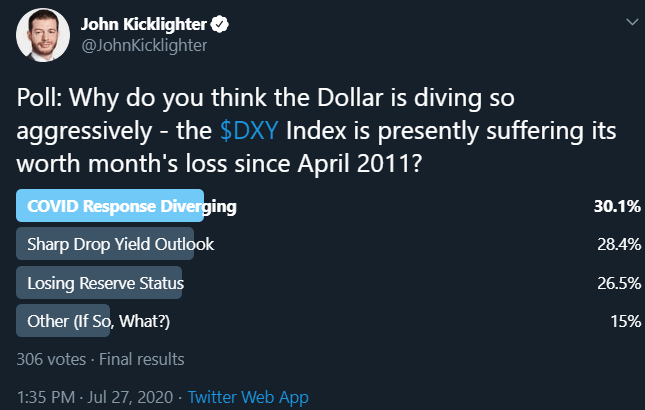 Given the disparity in recent policy efforts between the US and Eurozone, it comes as little surprise that this pair would exhibit the disparity in perceived growth potential. It is worth reminding ourselves of the higher level technical progress that this pair has made this past week and consider the further rounds of data and headlines that are still ahead. In particular, the 2Q GDP figures on tap for Thursday are worth setting reminders for. 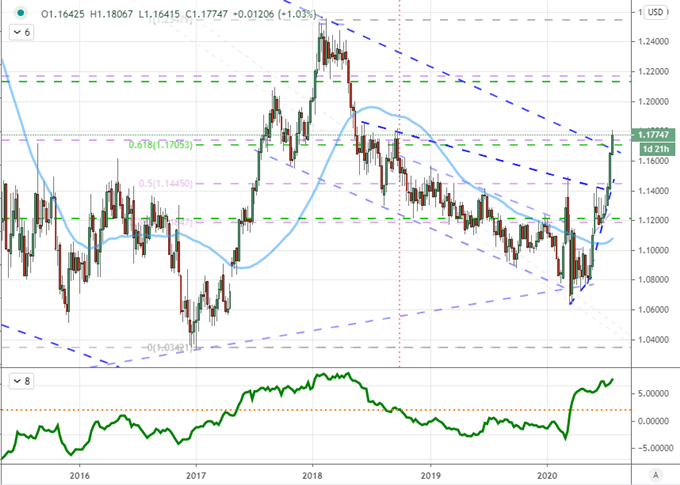 GDP, FAANG Earnings, Coronavirus Vaccine and Other Event Risk Ahead

For standard, scheduled data, the top events on my calendar are the updates on economic activity over the past quarter for the United States, Germany and Mexico. For the first two countries, there is clear representation for the world’s largest country and its largest collective economy. It is also a very distinct backdrop for EURUSD as mentioned above. On the other hand, the markets have shown some discount around data coming from the March/April time frame as hope has been fixed on more recent readings from June that cater to the hopes of a ‘V-shaped’ recovery. That said, more recent statistics like last week’s initial jobless claims may put a finer point on the nuance. 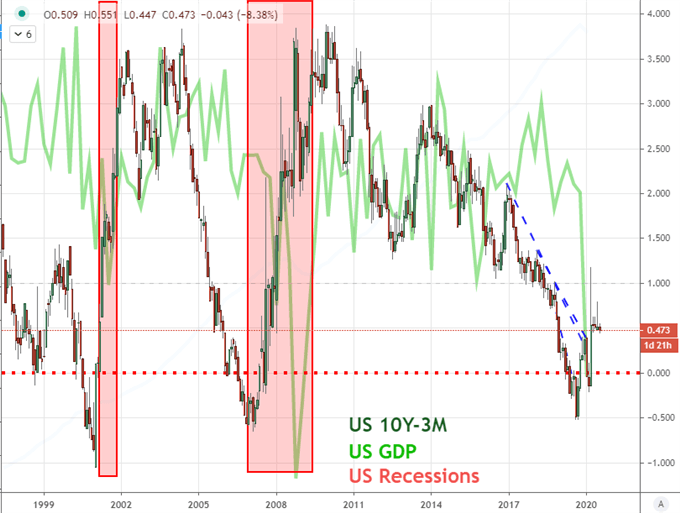 In contrast to the convenience in release time and negative implications of statistics that confirm a historic recession in the ‘Great Lockdown’, the concern around the coronavirus has a surprising ‘bullish’ silver lining to it – or at least that is how it seems as speculative appetite attempts to downplay the concerns. The race for a vaccine has led to significant rallies for the likes of Moderna, AstraZeneca and Gilead. A drug that can respond to the pandemic can significantly change the economic and health equation. That said, enthusiasm is perhaps going too far with speculative exuberance creeping in. This week, Kodak – a camera technology company who also tried and failed to transition into the crypto craze in 2018 – has seen its shares rally over 2,000 percent at its peak on news that it received funds to support vaccine production.

Chart of Moderna, AstraZeneca in Red and Kodak in Green (Daily) 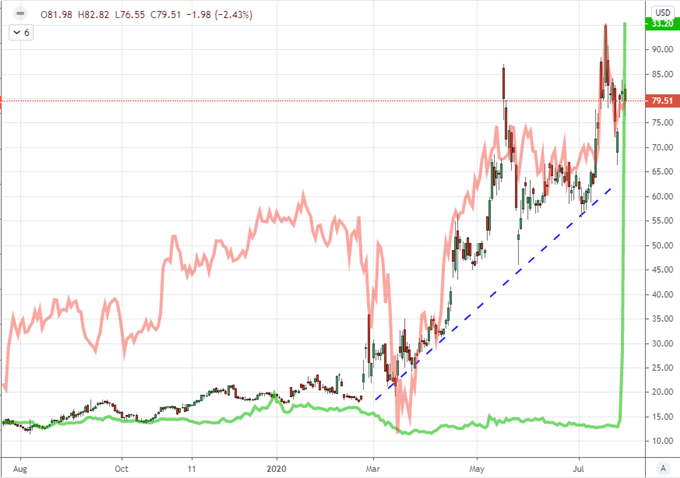 For probability and potential in market moving terms Thursday, my top concern is the FAANG earnings due after the New York close. The speculative pace set by the high market cap technology stocks these past years put an inordinate amount of attention on the Nasdaq and the high flyers when the winds are favorable or unfavorable. Better figures than expected are likely to render less market-wide enthusiasm than disappointments would inspire broad risk unwinding. 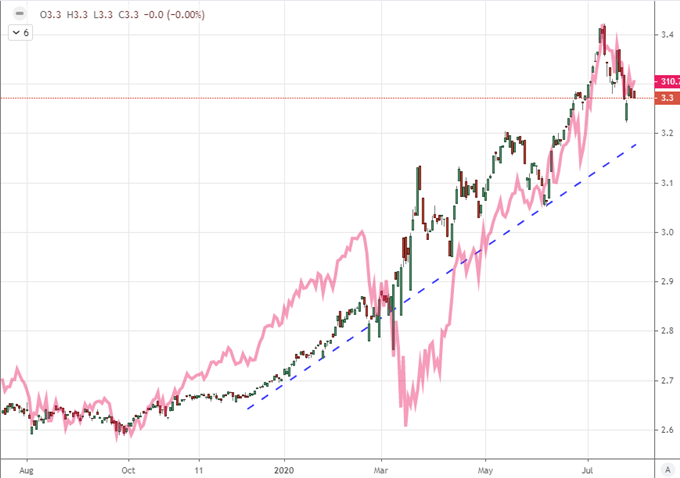 Keeping An Eye on the Aussie Dollar Crosses

While my attention typically follows the priority of where the greatest market moving potential lies, I also like to keep tabs on interesting developments on markets that may fall a little further off the beaten path. One such area is the Australian Dollar. This is a traditional risk-sensitive currency which has seen its primary trade connection (to China) strained while its struggles with the coronavirus are picking up. So what is keeping it buoyant? There are arguments that can be made and foundations of confidence don’t always have to be rational. However, if the market decides to revert to traditional measures, pairs like AUDUSD, GBPAUD and AUDJPY are ones to watch. 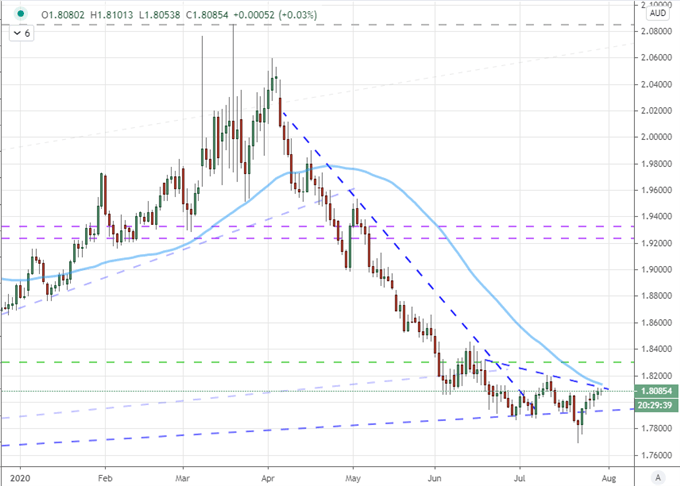