EURUSD Ready for ECB and NFPs, EURJPY and Dow Rally as Risk Drives

A Risk Appetite Broader than the Nasdaq Temptation but a Lasting One?

The fomomentum (all the credit to Ivan the K on Twitter) continues. Risk appetite is extending its reach in the speculative markets, but its genesis doesn’t seem to be of the most convincing origin. If we were to sift the fundamental backdrop for a truly reassuring theme upon which to build enthusiasm, it would be quite the reach to downplay the new troubling issues at hand. The pace of economic recovery from the pandemic, trade wars and social unrest are only the most immediate troubles at hand. There is much more to challenge optimism. Nevertheless, risk appetite has climbed. Global indices (ACWI) is accelerating and pushing to early March highs. The EEM ETF as a benchmark for emerging markets has gapped higher and extended the run for the third straight session. Even the junk bonds are bit by the optimism bug. Yet, still leading the immoral charge are the US indices. The Dow has sidled up to the 200-day moving average while the Nasdaq 100 came within 0.07 percent of its record high in February. 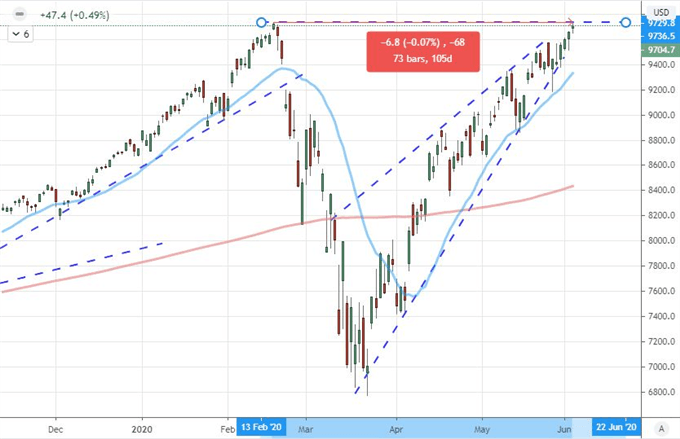 With the US indices so close to record highs, it is reasonable to re-evaluate our conviction in the bigger picture for risk appetite. There has clearly been a bid to mount recovery since the March 23rd low (in indices) was set. That said, the economic and financial backdrop continue to present a strong argument against genuine optimism. Yet, it is the market that sets its own priorities. I ran a poll on Twitter asking those keeping tabs on the market whether they believed the current upswing was a systemic move or merely a temporary rebound in a much larger and protracted decline. While the percentages were not as skewed as May or April, there remains a skew in favor of the bears. 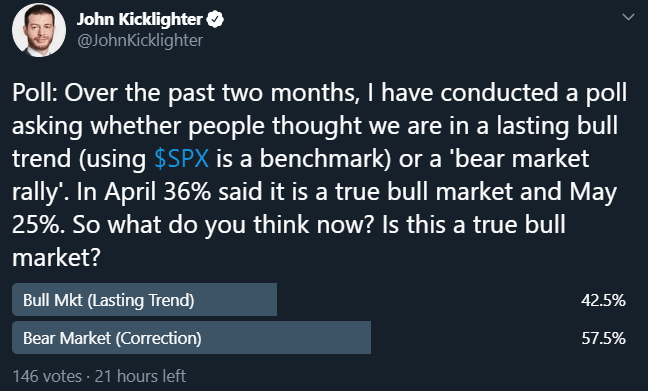 Looking out over the various markets who lash their boat to speculative appetite, there are a host of interesting performances. Among the more reserved measures, interestingly enough, is crude oil. Despite its ability to rise on speculative appetite historically, the commodity is still noticeably lagging. Perhaps its growth-connections are grounding it. Meanwhile, the Yen crosses are proving among the most impressive performers. Among the pairings, the USDJPY is perhaps one of the most interesting measures owing to the tumble from the Greenback. Despite that drag, the pair has still advanced these past few days – suggesting a meaningful strength. Yet, among the pairs with the most impressive pace and fundamentals to monitor ahead, EURJPY has crashed through multiple resistance levels of late. The 8-day rally matches the longest climb since February 2016 and the pace is the fastest since April 2016. With event risk ahead, this is a pair to watch. 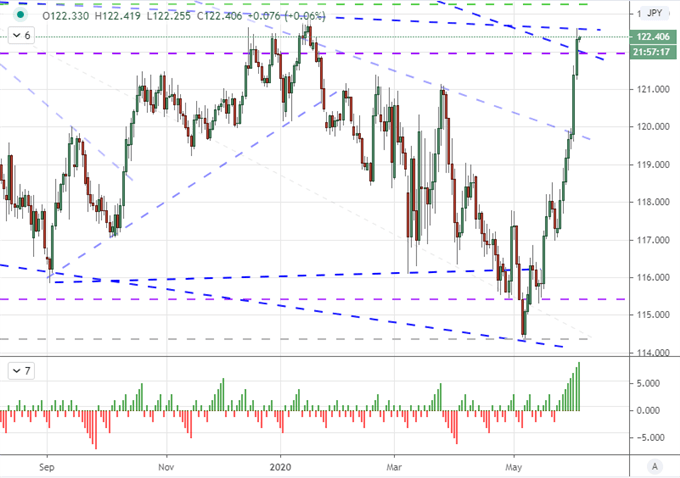 Dollar Extends its Slide as the Euro Takes Advantage – And Now, The ECB

As we navigate into the final 48 hours of this trading week, there a few very high profile events on tap to wrest the focus away from sheer speculative momentum and perhaps return us to fundamentals. For most intents and purposes, EURUSD will be the most concentrated pair. For the second most liquid currency, the advance is unmistakable – even EURCHF is rising. This has been helped along by the market’s favorite topic when it comes to risk appetite: stimulus. Following the news over a week ago that Europe would commit to a massive 750 billion euro stimulus program, the currency has climbed. Yet, there are two sides to such external support: fiscal and monetary policy. The ECB is due to tell us how much they are willing to do today when they decide policy. There is hearty debate on both sides of this debate. 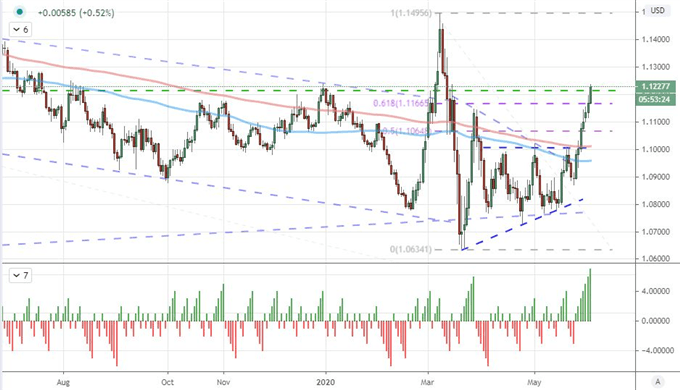 It is remarkable – though not inexplicable – that markets are now treating more or faster stimulus as an accelerant to local currencies. Historically, monetary policy has urged capital invariably to the local currency as the markets are presently less concerned about the distortions stimulus create and instead seems to find connection to a faster pace of recovery. Should the ECB upgrade its accommodative stance further, I will watching the currency and key exchange rate very closely. On the other side of that equation, the Dollar has not arrested its tumble. The DXY Dollar index dropped a 7th straight day for the worst performance in years, but growth and rate projections aren’t exactly revelatory at this point. Perhaps the trade wars, risk of a second wave of the pandemic and general discord expected as the US election approaches will keep the markets off kilter. 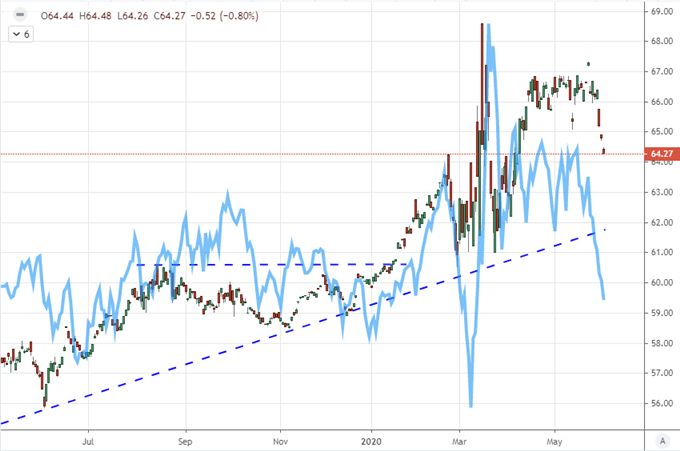 While there are many interesting markets in their own right at present, I maintain that the most impressive on the strong slide is the anti-Dollar advantage takers. The EURUSD, AUDUSD and even USDBRL are taking advantage of the situation. With the NFPs is just over the cusp, I believe it will be difficult to extend the DXY’s slide these next few weeks. Always possible, but that doesn’t mean it is probable. One pair I highlighted for its technical appeal was the GBPUSD exchange rate. We haven’t covered that situation as much, but it will load a range resistance that also corresponds to a major technical level (1.2650). 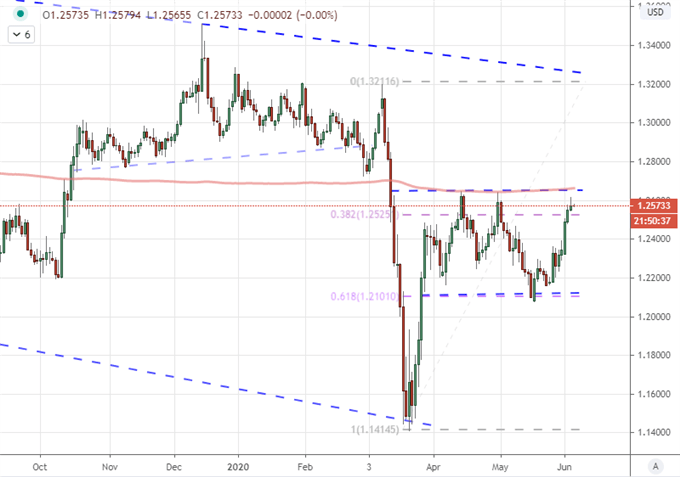