This week seemed to hold relatively limited potential for any serious monetary policy speculation. There were no major central banks due to review their monetary policy mix, the data on tap wasn't the type that is expected to single-handedly change officials' views and there were few key policy speeches scheduled from the governors. Yet, markets ultimately determine what is important and what isn't, and the speculative ran clearly felt the rhetoric from Fed voters Richard Clarida and John Williams was worthy of significant adjustment Thursday. Ultimately, after the two spoke, the market-based pricing of a 50 basis point rate cut at the July 31st FOMC meeting surged to a 70 percent probability in Fed Funds futures and 65 percent via overnight swaps. That...is very aggressive. 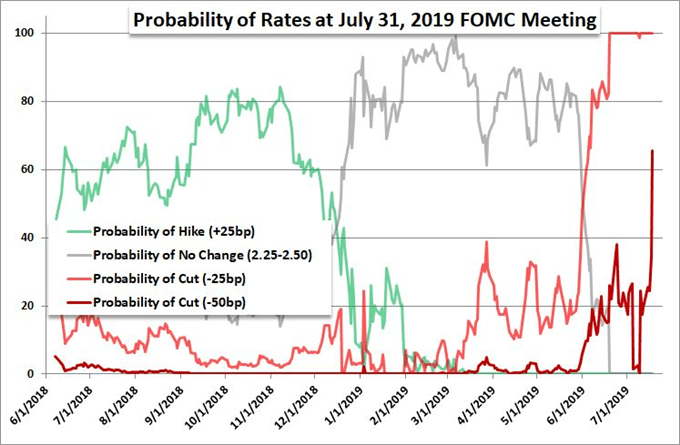 What did the two officials say that would charge such a certainty that the group would have to abandon its own forecasts from just a month ago - remember the SEP showed a median forecast of no change in rates in 2019, with 7 members actually forecasting one 25 bp cut and a single member projecting two. Clarida made an important economic evaluation, but not one that dramatically altered the market's mood, by saying the uncertainties weighing the outlook had increased. Far more interesting though was the suggestion that the Fed's benchmark rate couldn't deviate too far from its global counterparts. If that becomes the US central bank's guiding light, the gap is a large one to close with serious ramifications for the capital markets through speculative appetites to fuel. 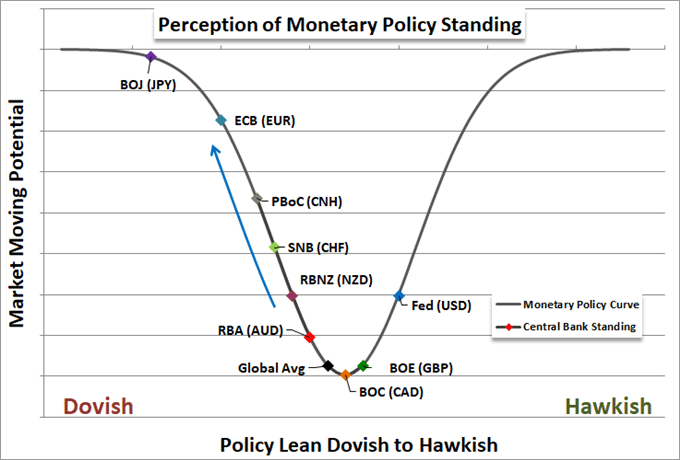 From the New York Federal Reserve President - permanent voter and the person that is supposed to oversee the country's financial market health - we heard his opinion on how to approach any future signs of pressure. Williams remarked that it cold be better to take preventative action rather than respond after a disaster befalls the country. To a market that is already far more dovish than the official Fed line allows, that reads like a warning for earlier and more aggressive easing from the world's largest central bank. He also said that he supported offering specific timetables on future rate cuts. That could add a new certainty to forward guidance - that could easily create problems should conditions/data make it impossible to live up to the promise which in turn would trigger a wave of volatility. And, just to ensure this wasn't simply a US affair, Williams had also remarked that the US has more room to react to negative shocks should they arise compared to Japan or Europe. Throwing the ECB and BOJ under the bus probably won't help the view of stability across the global financial system.

In the aftermath of the Fed rhetoric and dramatic response from interest rate expectations, there was significant response from the capital markets. The least remarkable response was from the benchmark that has generated the most benefit from the intervention over the past months and years: the S&P 500. The benchark US equity index did 'jog' higher, but it wasn't a move that would seemingly recharge the boyancy that has driven the benchmark equity indices to their record status this month. Far more impressive was the Dollar's response. The Greenback suffered a large drop on the day with an intraday effort that showed remarkable consistency rather than a single collapse that may be more the result of liquidity than sentiment. The problem with the Dollar's response is that there has been a poor alignment to swings in rate expectations and currency response. There is little follow through. Furthermore, this adjustment to rate forecasts is unlikely to continue along at this clip. A 75 bp cut is almost impossible and the market will more likely than not start to reflect on the significant improbability of a 50 bp move. While that may not recharge the Dollar, it will definitely keep that high barrier to follow through. 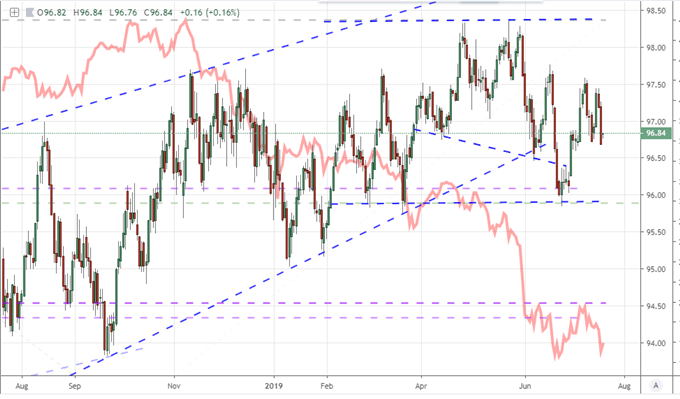 A far more significant benefactor from the expectation of significant Fed accommodation than the US indices - or any other risk-leaning asset for that matter - was gold. For those that just want to scratch the surface, the slide for the Dollar can be considered ocassion enough to put the precious metal to rally, but that doesn't fully account for the fundamental backdrop that represents a far more significant launch pad for the commodity than virtually any other asset. In a capitulation of normalizing monetary policy from the world's most progressive central bank, the outlook for sovereign currency and fiat assets looks significantly more suspect. Similar to the situation between 2008 and 2011 where the rise of QE programs lifted the need for an alternative store of wealth, circumstances are aligning once again in gold's favor. This time around, however, we may see risk aversion further warp the landscape. 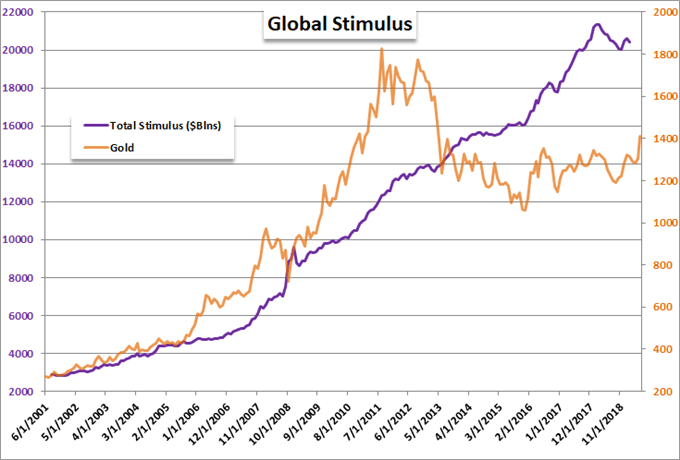 Monetary policy wasn't the only fundamental theme pulling the market's levers. Growth was another consideration - though perhaps not effectively in the traditional outlet. On traditional growth, White House Economic Adviser Larry Kudlow stated they did not believe the growth figures posted by China at the beginning of the week, suggesting all of its data is suspect. That is not exactly revolutionary thinking among global investors. In a less standard channel of 'growth', the run for capital assets was under sharp scrutiny Thursday following the pained response after-hours by Netflix shares following the company's earnings report. As a key tech player (part of the FAANG group) in a sector that has paced (tech) which has paced the best performing general asset class (US equities), this company's reporting would carry more weight than most. Ultimately, NFLX shares posted the biggest drop in 12 months and my FAANG index triggered a provocative drop from a range high. And yet, neither the Nasdaq 100 nor S&P 500 would succumb to the riptide. If Facebook, Amazon and Google - all expected to report next week - similarly fall short, I would not be so sanguine about the market's ability to find its balance. 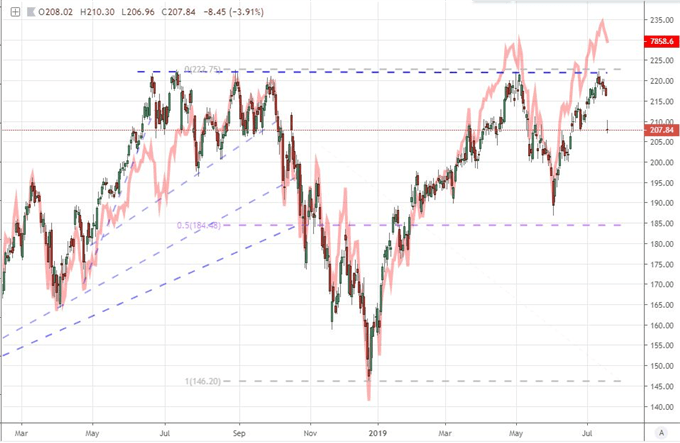 While trade relations were slow to build steam this week, they were still showing progress this past session. Between the world's two largest economies - the US and China - there seems a familiar impasse in place. Sources on the Chinese side suggest talks have stalled with the status of Huawei representing a serious hurdle. However, the US Treasury remarked officially that the Chinese telecom's status on the open business list was not a sticking point. Who to believe? Far more interesting for the state of trade was the trouble brewing for other US relationships. President Trump reportedly met with airline CEOs to talk transparency ahead of their earnings update with a clear implication of global competition. Further, the G-7 reportedly came to an agreement on an 'ambitious' but minimal digital tax on large tech companies, perhaps withholding some of the direct tension that had built up between France and the US when the former announced last week a 3 percent digital tariff of its own on all large tech companies. We discuss all of this and more in today's Trading Video.

Chart of EURUSD and 1-Day Rate of Change (Daily) 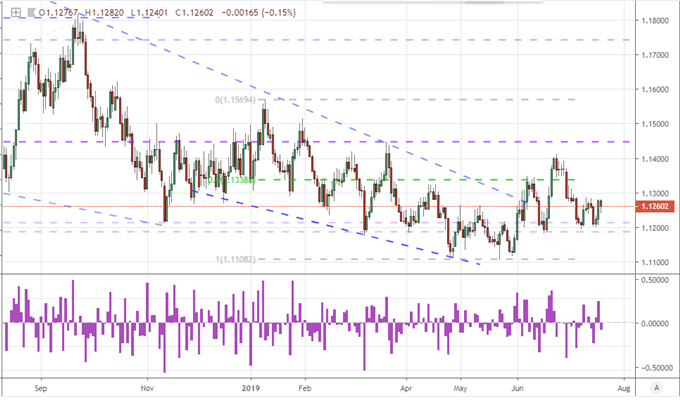