A Bounce in Risk Backed with Little Enthusiasm

Risk assets across the world put in for a speculative bounce this past session, but the effort leaves very limited conviction that this is a move that can readily take the helm. When looking for a clear signal via sentiment, my preferred gauge is a combination of strong correlation across assets usually unrelated unless sentiment is in charge and a collective move that signals appetite - bullish or bearish. While some of the more pummeled benchmarks of late put in for a meaningful advance, it was clear that there wasn't an overwhelming urgency across the speculative rank to chase yield wherever it could be found. US indices led their global counterparts in an uneven advance for equities, while other speculative assets I track for sentiment through active New York trade were simply treading water. The EEM emerging market ETF, the HYG junk bond funds and key Treasury yields were waffling, there was a distinct drop from speculative commodities and jump from the Yen-based carry crosses. This signal of tepid conviction in correlation fits the technical and fundamental conditions we are facing. Just a perfunctory glance at the S&P 500 or Dow over the past month makes clear what an up-hill battle it would be to mount a recovery from this spot in the middle of empty space on the charts. It is possible, but setting the first higher high for the Nasdaq 100 in 10 trading days or retaking the two-year S&P 500 trendline support we crashed through last week is a first, low threshold to surpass. It is best to remain skeptical and short-term oriented with our trading for the time being. 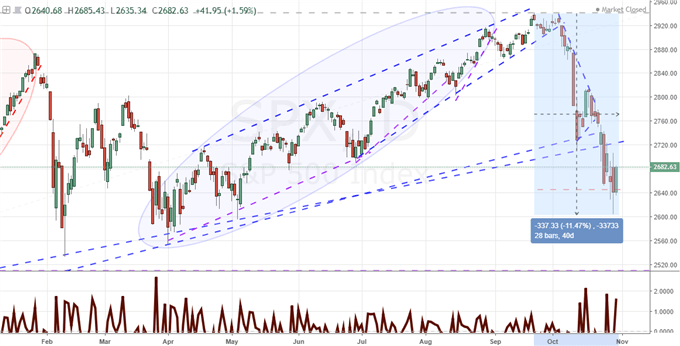 Keep the Themes In Mind as Headlines Distract

Another crucial reason an expectation for full-blown recovery from the likes of the Dow is impractical from our current bearings is the lack of fundamental support. High profile, global fundamental event risk this week is a significant net detriment to investor sentiment. If there were any signal upon which bulls could place their enthusiasm, the US sentiment survey this past session would certainly be the most prominent. Gauging consumer confidence, the Conference Board's October update offered a robust upgrade. The headline 137.9 reading was the highest in 18 years and the forecast component would also climb. Meanwhile, the NRI's business sentiment survey showed those firms reporting sales rising versus falling hit a reading of 55 which was the highest in 7 years. These favorable figures help fend off the concern surrounding political risk as the US mid-term election is now less than a week away. Yet, these readings do little to clarify the political course into the future much less the health of the world's largest economy. They do even less to settle the systemic themes that we are still dealing with across the world. One of those themes of crushing importance is trade wars. President Trump issued his warning Monday that he was ready to increase tariffs on all Chinese imports should he and Chinese President Xi not reach an agreement at the G20 summit at the end of the year. Another theme of exceptional reach is monetary policy. The Bank of Japan's (BOJ) rate decision Wednesday morning will be far more important than short-term Yen volatility represents. The group is almost certain to hold course on its policy, which is a significant sign of their inability to maneuver. The BOJ and all its major counterparts would like to pullback from their unprecedented stimulus and zero rate programs, but they are held hostage as a crucial pillar of support for risk trends. Even if such themes are front and center at the moment, they will eventually return to focus. 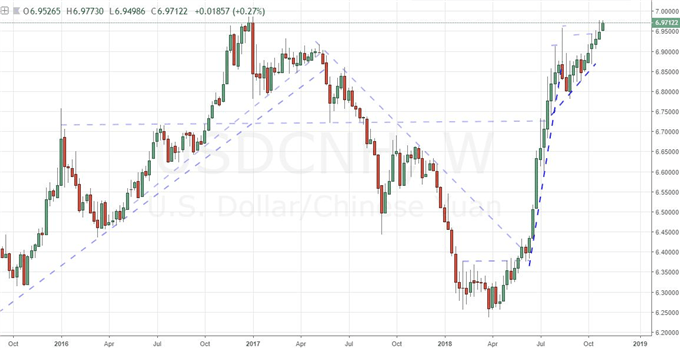 Few FX traders have likely missed the technical position in which the Dollar finds itself. The DXY ended Tuesday lingering at 97 which is the intraday high established in the August 15 peak. That is in turn the high point for the benchmark currency index in 15 months. There is considerable weight that retail technical traders are willing to assign this immediate resistance. With the threat of another surge in volatility lurking, it is natural to view this kind of technical cue with a perspective that it will catalyze into a breakout-with-follow-through scenario. However, there is a vast difference between a breakout and the development of a nascent trend (a break with material follow through). There needs to be an intent that spans the speculative rank. What would genuinely motivate the Dollar's rally? The sentiment data this past session only carries so much leverage while the NFPs Friday is a headline distraction and the mid-term elections will not be rendered inert by a sentiment survey. Meanwhile, the Dollar's shorter-term exposure to risk trends and long-term threat through a ballooning debt and trade wars backlash present few true opportunities. A better gauge of the Greenback's circumstances may be EURUSD. While near its own swing low, there is still a buffer until we reach 1.1300. Further the Euro can contribute significantly to that pair's next phase. Eurozone GDP fell short of expectations in its third quarter update (0.2 versus 0.3 percent) and the region's sentiment surveys eased, yet the persistent concern is Italy. Its economy stagnated through last quarter and the government seized on the update as evidence that a spending increase is essential. If the market's view on the world's second most liquid currency turns septic, there are few alternative outlets for capital other than the Dollar. In effect, the USD's best option is simply not to be in a worse position than its major counterparts. 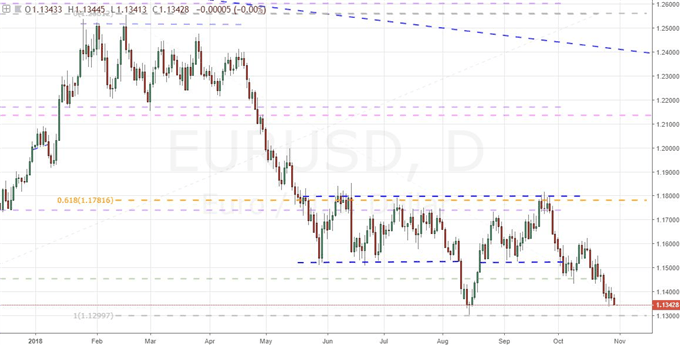 Looking outside the pull of the three most liquid currencies in the FX market (the Dollar, Euro and Japanese Yen), there is movement and event risk to register elsewhere. From the Sterling, the Brexit slide continues. News that the breakthrough in the divorce proceedings between the United Kingdom (UK) and European Union (EU) was dashed by the in-fighting by the former's government quickly and readily deflated the Pound. Concern that the country will fall headlong into a crash out is spreading quickly throughout the financial markets. There are still around five months to agree to a path of separation, but such an agreement needs to made well in advance of the cutoff date in late March to afford time to earn approval by a long list of governments and work out the technical details. That window is quickly closing. In the meantime, ratings agency Standard & Poor's issued a warning that a 'no deal' outcome could push the UK economy into a prolonged economic recession. In contrast to the abstract fundamental risk of the Brexit, the Australian Dollar faces discrete event risk on its own docket. In particular the Australian 3Q consumer inflation report (CPI) taps into the currency's wayward carry trade role. A spark of opportunity for a hike can spur an already-deeply discounted carry currency to recovery. What is remarkable is the restraint from the currency and AUDUSD in particular to risk aversion or Dollar gains. There is a clear shift in bias here that can leverage trade opportunities if properly motivated. We discuss all of this and more in today's Trading Video. 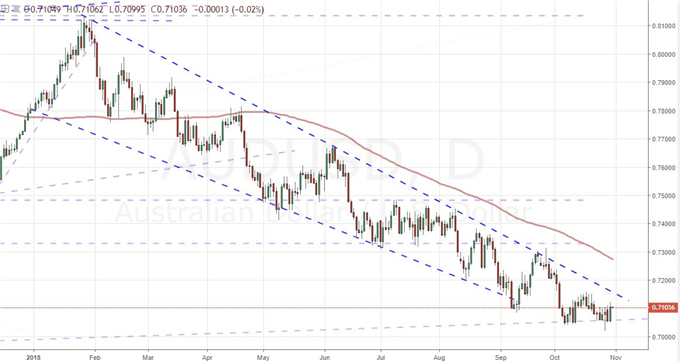