Are you trading any Dollar based majors? Concerned about what the gradual policy shift from the Fed means for general risk trends? Join me for live coverage of the FOMC rate decision. Sign up on the DailyFX Webinar Calendar page.

Risk trends are the foundation of all market trends in one form or another. Everything else is simply a catalyst that can charge the collective appetite of adding to risk exposure or wind it down. It is with that view on the market's undercurrent that we should assess the implications of this week's remarkable stoicism. We didn't register the concern that naturally follows the weekend's headlines relaying the United States' efforts to further isolate it from trade partners with President Trump escalating the row with some of the country's closest trade partners. Yet, disarming interpretations that this is evidence of a bullish bias that thwarts uncertainty, this past session showed little yield to optimism following President Trump's meeting with North Korean leader Kim Jong-un in Singapore. This is a familiar picture of complacency at work. Until something forces speculators to make a choice, the market rank may leave the burden of picking a long-term view for the future. Or, perhaps, what we have seen in the opening 24 hours of the week is anticipation for a more action-packed event?

Before There Was Global Trade Wars, There Was Monetary Policy

The economic and political relations between the world's largest economies is exceptionally important to the course of the financial markets moving forward, but it isn't the only key theme that holds substantial sway over investors' course long-term. It is easy to forget the importance that monetary policy plays to our current standing an path forward as the major central banks have proven remarkably effective at directing expectations through their forward guidance. That said, the past decade of general bullish reach was made possible by the extremely accommodative policies from the Fed, ECB and other major central banks around the world. Near-zero rates and unorthodox stimulus programs translates into easy access to funds and an implicit support for speculators that was famously referred to as 'moral hazard'. These crisis-era policies extended well past the actual crisis conditions following the 'Great Recession' and arguably inflated speculative appetites beyond the constraints of a simple growth-supporting financial recovery. Yet, we have seen a slow tide shift towards normalizing from the extreme support rolled out by these groups. At what point is it recognized as a withdrawal of support? When does it become a burden to speculative excess? This week will prove a great litmus starting with the Fed decision Wednesday. 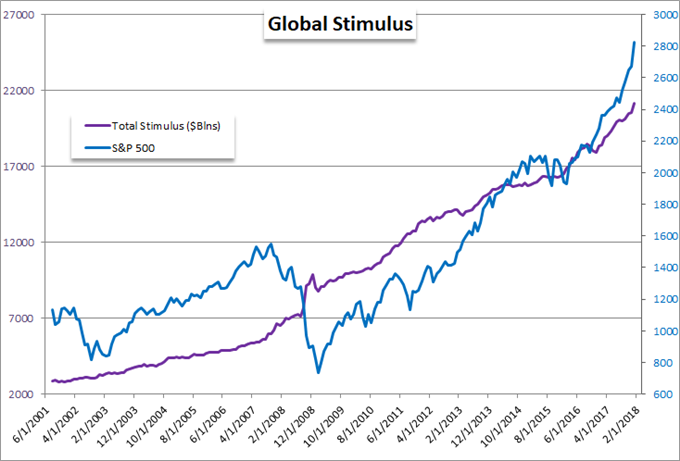 The Fed Will Hike Rates, But What More Will They Do?

There are two general paths of influence for Wednesday's FOMC rate decision: the short-term implications of the contrast the Fed draw to its counterparts and the long-term recognition that the era of 'easy money' is slowly receding. For the Dollar, the market impact is still more readily registered through the latter. As it stands, the market is virtually certain that the US central bank will hike its benchmark rate for the second time this year by 25 basis points to a range of 1.75 to 2.00 percent. That furthers its technical advantage versus nearly every other major for yield; but as we saw in 2017's slide from the Dollar, a considerable portion of this speculative appeal has been discounted. The real fundamental weight is behind speculation for the Fed's course moving forward. Fed Funds futures are still split between three or four total hikes in 2018 (futures show a 46 percent chance of four), but that sets the bar even higher than what it already is relative to counterparts. If risk appetite is so robust that a slight increase in yield advantage is sufficient to revive the speculative reach, it is possible that the Fed holding its advantageous course can re-establish the Dollar's medium-term upswing. A faster pace of hikes would do even better in that environment. That said, we don't seem to have that backdrop. Instead, it is easier to disappoint and there is a larger premium to work off should they disappoint hawks. Pairs like the NZD/USD, AUD/USD and USD/CAD are better positioned to leverage the Dollar's swing. EUR/USD is arguably the worst option. 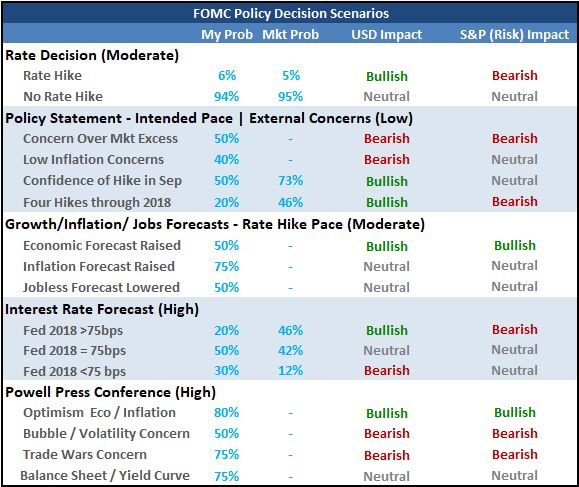 Anticipation: The Trouble with EUR/USD

In the event that the Fed triggers a speculative run - bullish or bearish - for the Greenback, the most troubled counterpart to select for the currency would be the Euro. While the present bearings for the Fed and ECB couldn't be any more different, speculators value the outlook. Where the US policy authority has gone through pains to set the market's appreciation of its course, the outlook for the European Central Bank is in considerable flux. It is that background that will ramp up anticipation for this group's policy meeting on Thursday and in turn curb speculative ambition before it is clear whether they intend to fully taper their QE program over the coming months and set put the bank on pace for its first hike by mid-2019. The EUR/USD is not the only pair that will have to deal with cross currents. Cable is another major that looks ripe for trade potential, but ongoing Brexit votes laden it with an uncertain path of volatility ahead. If you are looking to avoid systemic issues like risk trends, trade wars and critical monetary policy turns; consider the Canadian, Australian and New Zealand dollars. We discuss all of this and more in today's Trading Video.