The Natural Cap on Risk Trends

Despite the ominous countdown to the end of the grace period set for countries to win exemption from the United States' aggressive 25 percent tariff on steel and 10 percent tax on aluminum, speculative markets have enjoyed a notable rebound these past few weeks. That seems to defy the seriousness of what an escalated trade war would mean for the global economy and markets, but the markets have a habit of optimism - or more accurately complacency - that they have drawn from the past few years. Yet, caution is still very much a feature of this landscape; and few market participants are willing to ramp up their exposure with such a substantial unknown ahead of us. It seems the US markets hit that limit this past session. The S&P 500 and Dow retreated from their respective congestion resistance points and the Nasdaq slipped from the record high it posted to start this week. Other risk assets from global equities to emerging market assets to Yen crosses carved out similar paths. This is not necessarily a genuine fear returning to the system, but it is just as definitive in its market influence.

While we await the Trump administration's ultimate decision on who will fall under their metals' tariffs at the end of next week, it is not a certainty that we will be able to avoid another slip in sentiment in the interim. Ahead of its meeting next week, the G20 drafted a communique that called upon its members to avoid protectionist policies that risked the health of global GDP and stability of the world's financial markets. The threat by the EU to retaliate should it fall under the US sanctions and calls for a collaborative response to the country's efforts hang heavy in the air. Adding a new reason for concern on trade conflicts, there were new rumors late in the Tuesday session from an unnamed official suggesting that new tariffs on China targeting intellectual property and technology would soon be announced. Opening up multiple fronts for trade war only raises the stakes. 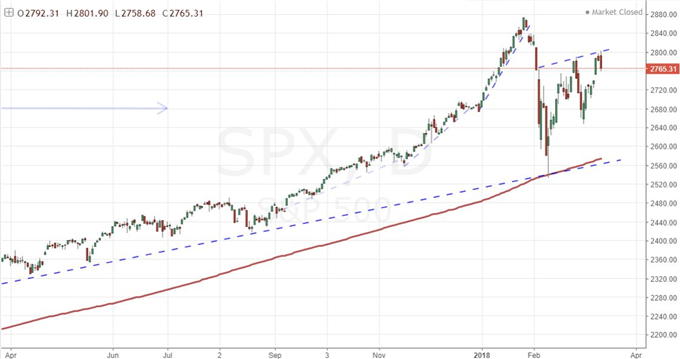 For the Dollar, its position at the center for much of this fresh and far-reaching protectionist action only puts it at greater risk. It is therefore no surprise, that the Dollar Index nor EUR/USD have found their way out of their respective ranges. We are unlikely to navigate to a clear trend until after these deadlines are cleared and our path certain towards trade wars or away from them. In the meantime, the possibility of another dramatic leg lower for the Greenback is rising as the United States' major trade partners threaten to work together to response to the country's tariffs. What's more, this particular fundamental theme effectively undermines the market moving potential of other drivers. The US CPI reading this past session was a modest boon for the Fed's monetary policy - a consideration that has earned the Dollar less and less lift over the past months. The inflation statistics were summarily ignored without a more extreme update to charge a full halt on the hawkish regime or definitively boost the forecast to four 25 basis point moves in 2018. 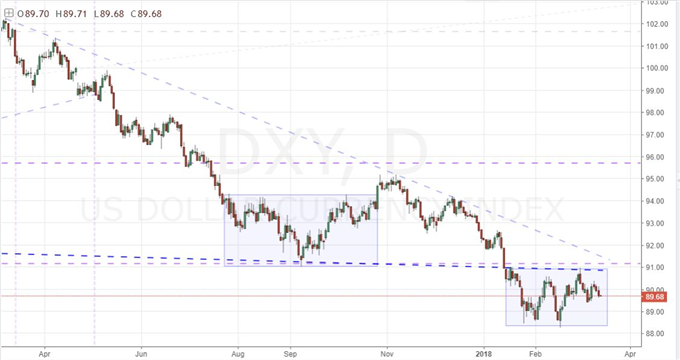 Pound and Loonie Volatility Face Limits, Euro and Kiwi the Same Ahead

The Dollar and risk trends aren't the only games in town. More active this past session was a rally from the British Pound and tumble for the Canadian Dollar. As brisk as these moves were at the peak of their drive, there is just as little hope for follow through. The Sterling advanced after the budget offered a modest upgrade to growth forecasts and a slightly smaller Brexit bill to the European Union. Nothing in this report lifts the Brexit uncertainty that enshrouds the Sterling, so trend expectations are excessive. For the Loonie's stumble this past session after BoC Governor Poloz pumped the breaks on rate forecasts, the dovish sentiment revives a prevailing trend, but this was already a mature bear. Should we expect anything significantly different from the Euro following ECB President Draghi's speech or the New Zealand Dollar's reaction after the New Zealand GDP update? Certainly they offer volatility potential but trends in this environment are difficult to keep charged. We discuss all of this and more in today's Trading Video. 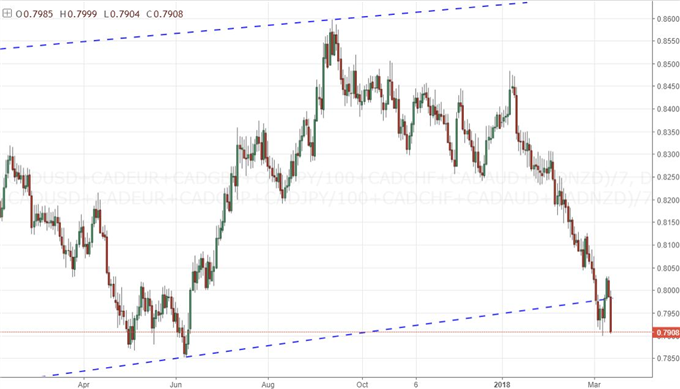