Dollar, SPX Feign Correction Ahead of State of the Union

Allowance for the 'Unthinkable'

Very few traders likely see in Monday's market developments the seeds of reversal. After too many false starts to count and such remarkable speculative drive to multi-year to record extremes, it would be foolish to dive headfirst into calling another false dawn. Yet, we should ask ourselves if there is more to lose for respond to our concerns over speculative stability or to remain obstinately ignorant of an eventual and inevitable turn in the speculative tide. I believe firmly in the latter. That doesn't mean that I 'back the truck up' on all risk aversion trades available. However, it does mean I will not indulge in the over-exaggerated set-it-and-forget-it risk appetite stretch that has developed over past months and years. And, it further translates into my lowering the qualifications for taking a counter-trend trade.

Both the S&P 500 and Dollar Take First Steps

Through Monday's session, both the US benchmark equity index and currency posted remarkable counter-trend moves. The scale of the moves was not remarkable in historical context - the S&P 500 only dropped 0.67% and the DXY advanced a mere 0.37%. Yet these are exceptional because conditions for both have been so persistently reserved and one-sided. For the US equity standard, the slip was the biggest in months. One day removed from record highs, still within the aggressive bull trend of the past month and not yet breaking the longest streak of trading days without a 1 percent decline in over half a century; we should be worried about the state of complacency in our market rather than how modest this all seems in the unusual context we have. For the Dollar, the bounce is carries far less historical context but it no less meaningful as a universal indicator. In this currency we find the confluence of what truly matters in the global capital markets. 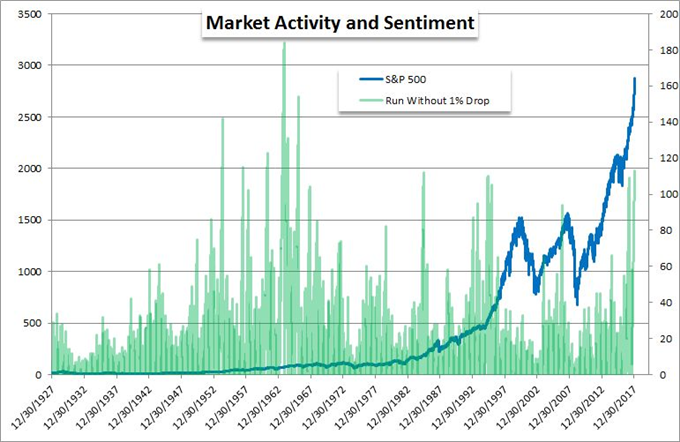 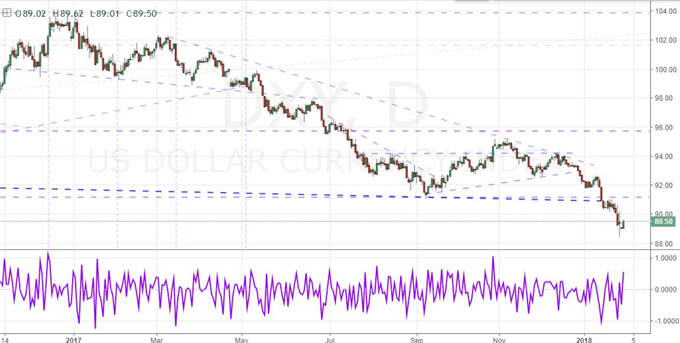 Through the US markets, we have the implications of fundamental charge that will span the globe. The question is what theme is more immediately in charge of global sentiment. The Fed rate decision on Wednesday will weigh in on the most hawkish monetary policy program of the major policy authorities. This is not expected to end in hike, but given the market's quickly rising expectations, it should maintain anticipation for a hike come March. At this point, there is even a 20 percent probability in swaps that the Fed will go four times in 2018 and the tepid PCE deflator Monday nor the NFPs outcome on Friday is likely to sway that. Monetary policy is a global platform for extreme sentiment, but far more market-moving lately is the implications of a resurgence of protectionism. Last week, the Trump administration took steps to bring forward an 'American First' agenda that is likely to result in reactions and escalation through a universally detrimental trade-based slide in global investment and growth. We will see exactly what is on the agenda at the Tuesday evening State of the Union.

Other Discrete Event Risk Ahead

The US headlines aren't the only volatility-capable listings on the economic docket. There is plenty more we should keep track of as global traders. In the Euro, we have the Eurozone 4Q GDP reading, but it is unclear how much impact this will have in a market that has founded much of its run through very early rate speculation. BoE Governor Carney is due to speak Tuesday, but it has been Brexit that has motivated Sterling repricing rather than rate speculation - and that theme has faded noticeably over the past month. Even the Aussie 4Q CPI should register for those tracking volatility. We saw the impact the Kiwi registered to its own inflation miss and the rate of return on carry trade truly matters in this world of oversaturation. WE discuss all of this and more in today's Trading Video. 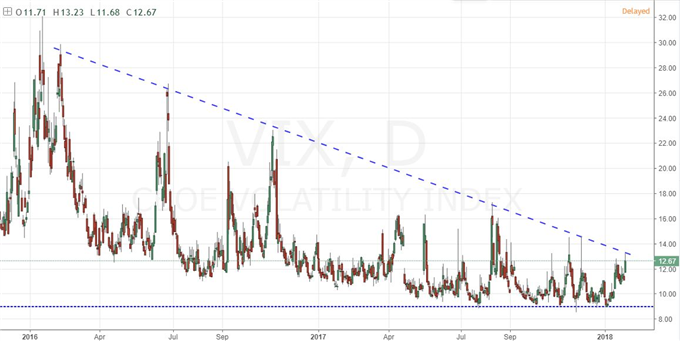