A US Government Shuttering and Reopening

The US government shutdown for the weekend but reopened by the evening Monday. We have come a long way from the violent reactions from markets in response to such brinkmanship and cliff diving in previous years. In past previous standoffs, US equities swooned (taking many other risk assets with them), bonds grew troubled and the Dollar lost traction. Yet, over time, the frequency of this financial and economic threat deadened speculators to the long-term ramifications. That apathy was on full display for this episode. The S&P 500, Dow 30 and other equities showed little concern for the development on Monday's open, but they sure did rally after it was cleared up. A market that plays down negative news but amplifies the positive is the rudimentary definition of a 'bullish bias'.

The Dollar's Take and Motivation

Similarly, the US Dollar offered up little concern for the temporary shutdown. That is even more remarkable given that the Greenback has been under bearish pressure for more than a year and recently found itself on the bearish side of a major technical break. If there were any better opportunity at prodding the Dollar to the next phase of a bear leg than this government disorder, I struggle to imagine what it would be. Perhaps this is just as readily a signal that the Dollar's tumble has reached its nadir - or perhaps it is simply reaffirming that its fundamental bearings are being set by its connection to major counterparts - like the Euro, Pound and Yen. It certainly isn't paying too much heed to Fed rate forecasts as those hit a fresh decade high (for December 2018). 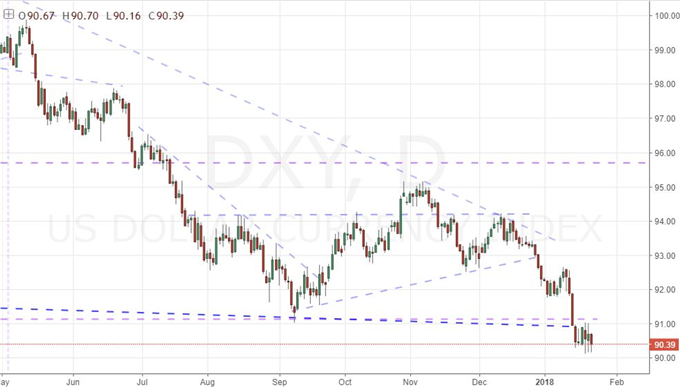 BoJ and then ECB Ahead

Ahead, we have the first of two major central bank rate decisions on tap. The Bank of Japan's rate decision offers no definitive time for release and is usually ignored by global traders because it is rarely changed. However, a sharp reaction by the Yen and Japanese yields two weeks ago to a noted technical change in the central bank's QE process will sharpen the market's attention. There is a global shift towards normalizing monetary policy and among the major central banks, the BoJ is the only group not to signal its - even long-term - intentions for the future. There is plenty of bullish and bearish opportunity amongst the Yen crosses (from AUD/JPY to GBP/JPY on opposite ends of the spectrum), but the real difficulty is sparking serious movement. All told, the BoJ has more surprise power if utilized, but the ECB Thursday will likely be the more effective market mover. 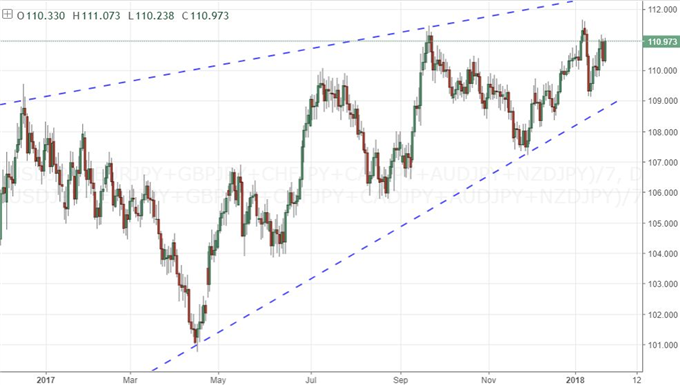 While there are plenty of stretched markets out there, few are producing technicals that even suggest there is a hint of risk for a reversal. In both Gold and Oil, that short-term pressure is starting to gain greater attention though. For the precious metal, the presence of a four-and-a-half year congestion resistance is exploiting the fact that the Dollar's slide was likely a key driver and is now easing its support. Crude meanwhile is a speculative run already backed by record long exposure and is growing more sensitive to rumors that OPEC is talking early production cuts. Let's see what wins out for the head-and-shoulders pattern. And, as for cryptocurrency, the 'hodl' crowd is straining dip buying is struggling to gain altitude and the links of Bitcoin, Ethereum and Litecoin explore steeper corrections. We discuss all of this and more in today's Trading Video. 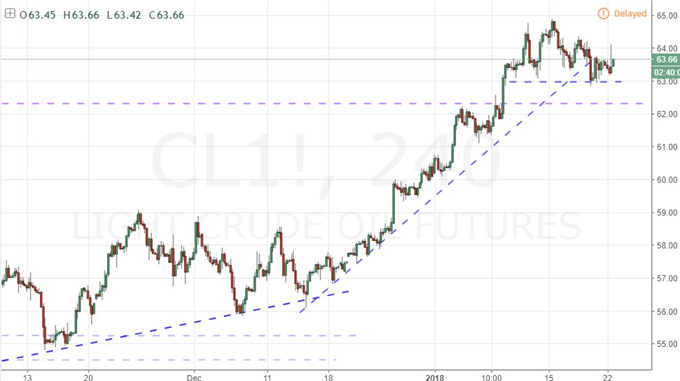