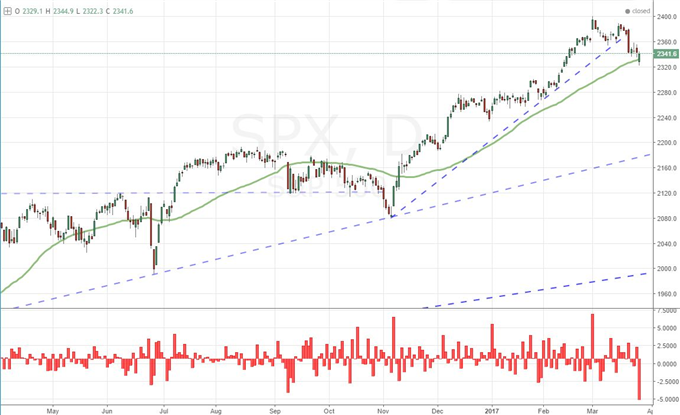 The news Friday after the close that the US healthcare reform effort had fallen apart exerted the expected pressure on the US markets and Dollar on Monday's open. The S&P 500 index suffered its largest bearish gap on the open in eight-and-a-half years while the ICE Dollar Index broke through the floor of a prominent head-and-shoulders pattern. Yet, on both accounts, there is not a sense of finality to this dramatic opening move. For the equity index, a rebound through the session helped to recover most of the opening losses; and further, risk aversion was not a universal spark for the world's financial markets. For the Greenback, a critical break of the EUR/USD's inverse head and shoulders didn't translate to exceptional technical progress on most of the other majors. This was the move to release some pent up pressure, but not a definitive change in conviction. That said, it could further set the stage for such a systemic view.

For US equities and the many other markets dependent upon favorable views of sentiment for performance, there is plenty of evidence to suggest current standings are precariously views of US political progress. The healthcare revamp poses a greater risk that more economically-directed tax reform and a new stimulus program could be far more difficult to push through - and perhaps even impossible. That does bode well for a market whose latest leg was a far reach and aligns very distinctly to the timing of the election. So, while there may be many components at play with sentiment's progress over the past months, it is likely that the fluidity of US policy is a main current. On that front, there is little scheduled ahead which we can track the progress - for better or worse - of this fundamental lever. There are no solid dates to discuss next steps on the proposals that matter the most, so headlines on upcoming debates or social media updates from US President Trump will have to be our volatile markers. That puts a serious burden on those holding risk - wait for relief that may never come, run the risk of confidence collapsing versus the restrained opportunity of further progress under ideal circumstances.

As for the Dollar. The risk connection is tangible. The appetite for the Dollar as early adopter carry currency and the hope for a robust pace of tightening moving forward are both wrapped up in the performance of the financial system. Should it falter, there is double pressure on the currency. The Dollar and EUR/USD reflected that, but the other majors weren't showing so troubled a picture. Sure, the Greenback slipped, but critical breaks and momentum were not as prevalent outside the Euro-cross. Fed speak and the Conference Board's consumer sentiment survey Tuesday may help stoke a direct Dollar view. Outside of the USD's pull, Brexit headlines will intensify and oil is on the hook with key support in view after an unfavorable OPEC/non-OPEC committee meeting this past week. We discuss the bigger developments in the market in today's Trading Video. 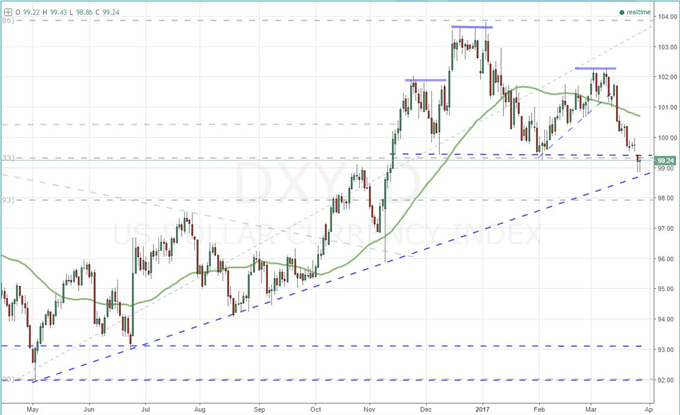