While most of the global market's benchmarks opened the new trading week with caution and restraint, there was no such moderation from the US Dollar. US headlines Monday struck the same fundamental fear that has ramped up day-to-day trade for the benchmark currency the past few months and notably altered its prevailing trend: global trade relations. A monthly low for the ICE Dollar Index has in turn leveraged similar historical milestones from EUR/USD to AUD/USD to USD/JPY. There is some technical support standing between the currency's increased volatility and the establishment of a meaningful bear trend. This coming session's event risk may offer a definitive push from range to trend or to perhaps curb such efforts until the next definitive fundamental development - whether that be 4Q US GDP or details on President Trump's policies.

This past session, the Greenback's fires were kept stoked by news surrounding the United States's promotion of trade restrictions. President Trump signed an executive order to ensure the US would not be part of the Trans-Pacific Partnership (TPP). He did talk to business leaders about corporate tax cuts and regulations, but didn't provide details on official policy surrounding these views. Further the fiscal stimulus and infrastructure spending aimed at charging domestic growth was not shaped with any further detail. Impacting the Dollar directly, both the President and his Treasury Secretary nominee Steven Mnuchin made remarks about the pain a high Dollar could inflict on the economy - though the former was far more definitive on that view. The budget and economic forecasts due from the CBO (Congressional Budget Office) today will keep the iron to the fundamental fire.

Another currency facing event risk with definitive market-moving potential is the British Pound. The UK Supreme Court heard arguments late last year on whether Parliament should have say on the Brexit outcome and subsequent negotiations. After deliberation, the group's ruling is due today. While the initial reaction and volatility following the outcome may follow the simple scenario assessment, the ultimate trends that result can offer some degree of conflict. Dispute over where authority lies and the timing of this messy event may only serve to create deeper uncertainty. Among other event risk to take stock off over the next 24 hours are a global round of PMIs, an EU official's discussion of Brexit, important Asian economies' 4Q GDP readings, a South African rate decision and Australian CPI. Traders should expect volatility and be ready for trend should it catch. We discuss how markets are moving and what is ahead to motivate them in today's Trading Video. 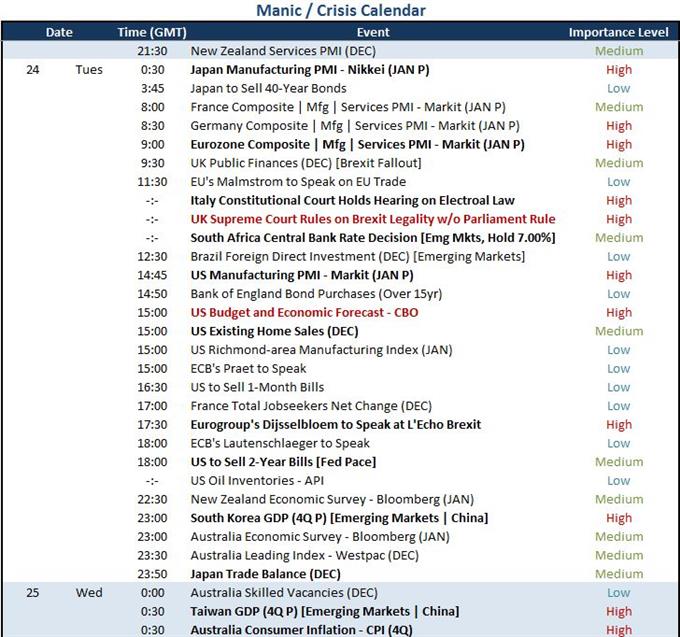