In our last article we looked at another top-side entry in Gold, and since that was published we’ve seen numerous allusions to continued loose monetary policy conditions out of the world’s largest Central Banks, and this has further contributed to the rise in gold prices. We discussed these macro implications in the article, All That Glitters is Gold.

The bid has remained strong behind Gold, and this is something that could continue depending on how next week’s onslaught of Central Bank announcements come out: If we do get more indications of ‘looser for longer,’ Gold can certainly continue the recent advance. But as always is the case with Central Bank announcements, there can be a duplicity of risk in the fact that even if the Central Bank does what markets are seemingly asking for, markets may not respond how one would expect.

Before getting to the current setup in Gold – a warning: This market is extremely stretched right now. The case can be made that Gold is overbought on a short-term perspective, and the weekly chart is putting in an aggressive Doji after a resistance inflection. Combine this with the fact that the Fed may not back off of further 2016 rate hikes, and this could lead to a down-ward retracement in Gold prices. So, this up-trend is not without risk. But the prospect of deeper monetary accomodation out of the Bank of Japan and ‘less hawkish’ forecasts from the Fed may make the attractiveness of the continuation warranting of the risk. 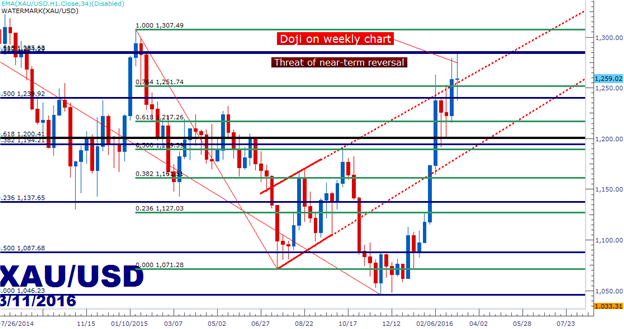 So, for those traders that are comfortable taking on the risk, we can plot support levels to look to get long off of to play the continuation of the up-trend. Yesterday’s post-ECB rally brought in a new higher-high off of a confluent resistance zone, and this may be offering top-side reload opportunities. Traders can look for support at the current level, which is a projection of a prior trend channel that’s seemingly found additional support/resistance (shown above in red). A little deeper, support could be sought out at 1251,74, which is the 76.4% retracement of the prior major move, and slightly lower at 1239.92, which is the 50% Fibonacci retracement of the most recent major move.

On the target side, traders could look that same 1,283 zone that’s come in as near-term resistance, and this could also be an opportunity to adjust the stop up to break-even on the remainder of the position should this level come in-play for long positions. After 1,283, the price zone of 1,307.49 becomes a level of interest as this was the 2015 high. And after that, 1,342.19 becomes a target as the 76.4% retracement of the most recent major move. 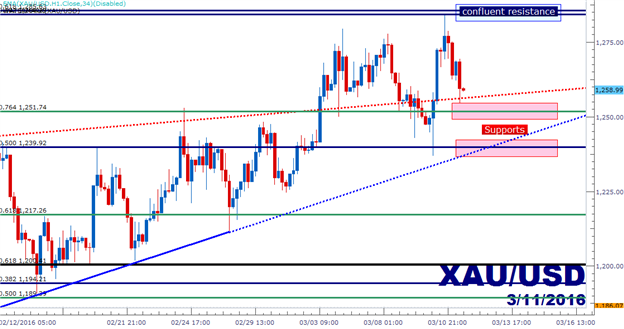