What’s driving precious metals? Find out in our market forecasts.

As we said last week, we are turning to how events are unfolding in gold to help shape our expectations for silver prices. On that, gold is up against a very important trend-line dating back to the 2011 high. Its influence has been quite significant on several occasions in the past year, and as we’ve said before it is our ‘line-in-the-sand’ for both sides of the market. Stay below and the long-term downtrend remains intact, break above and the gold may be on its way to turning the corner for a big move higher. With gold currently trading right around this line, we’ll first respect it for what it is until broken – major resistance. In the near-term, keep an eye on gold as it is currently supported by ~1260. A break below may be all it takes to set into motion a sell-off now that the 2011 trend-line has been tagged. 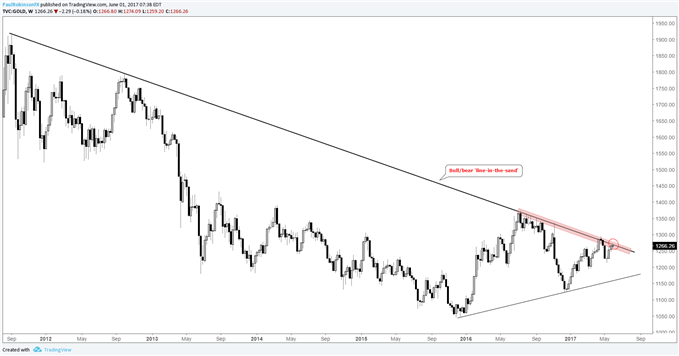 When it comes to silver the technical landscape has been a bit murkier, with nothing substantial to lean on recently. But with gold up against the 2011 trend-line, the bias is skewed towards lower prices at this time. The relatively weak posturing of silver compared to gold suggests that if gold pulls off the 2011 trend-line with momentum silver will take a hit, and potentially a big one. Over the past two months silver has put in a lower low (May low < March low) and now in position to put in a lower high from April.

For now, as long as silver stays below the recent swing-high at 17.47 and gold below the 2011 trend-line we’ll reside in the bear-camp. A break below the lower parallel in silver and 1260 in gold should be enough to intensify selling pressure.