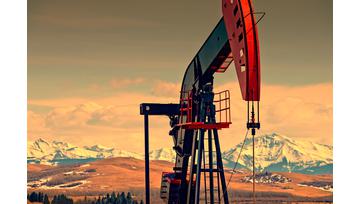 Safe to say that OPEC gatherings are about to get a shade more uncomfortable. On Monday, rumors leaked that Saudi was likely to ask that Libya and Nigeria to cut production as their increased production was overshadowing the intended positive effect of Saudi’s cuts. However, reports from Bloomberg have stated that Saudi Arabia itself is reporting to OPEC officials that they pumped 10.07 million bpd in June up from 9.88m in May and exceeding their limit for the first time since the production curb deal they helped broker. Either way, the minimal excess production will likely give Libya and Nigeria reason to state they were justified in overproduction due to high summer demand, but we continue to be a ways off from the hoped for Shock and Awe to scare markets to bid Oil higher.

One “positive development” is the dying off of legacy rigs in the shale regions that have been responsible for so much production in the last few years. The main argument is that legacy, or older oil wells are relatively expensive to maintain and to produce less than their recently completed and funded counterparts. A retiring of legacy wells could eventually lead to significant production decline at an overall lower cost, but it’s fair to say the this may not come as soon as OPEC and other stakeholders in the energy industry hope.

The EIA report that shows new production and legacy decline illustrates that 300-400k bpd is needed from new rigs to help offset retiring legacy rigs. I would argue that as oil stays at depressed levels, projects that had been approved or planned to be implemented will come offline, which over time could help balance the oversupply issue. However, this is not a quick fix, though a natural one, and could mean aside from a ‘Shock & Awe’ moment, we could be in for an early winter in terms of bullish crude oil prospects.

As the calendar rolls to the 2nd Half of 2017, click here to see the opportunities in Oil.

When looking at the chart, we appear to be fighting off an imminent move to a deeper bear market. The “line in the sand” on the chart is the base of the shaded rectangle drawn from the price range of the extreme day in November before price would eventually move higher to $55/bbl. A weekly close below $42/bbl would not only complement the fundamental picture above but continue the 2017 trend lower and likely signify a deep bear market that will have no quick solution despite OPEC’s best-laid plans and intentions. Only a weekly close above $48 would shift the view from bearish to neutral. A break above $52, though highly in doubt would turn the picture back to a Bull market. 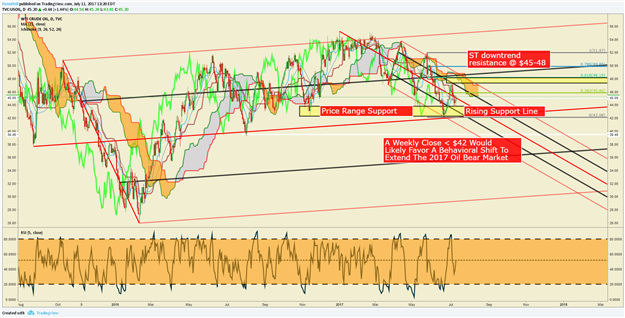 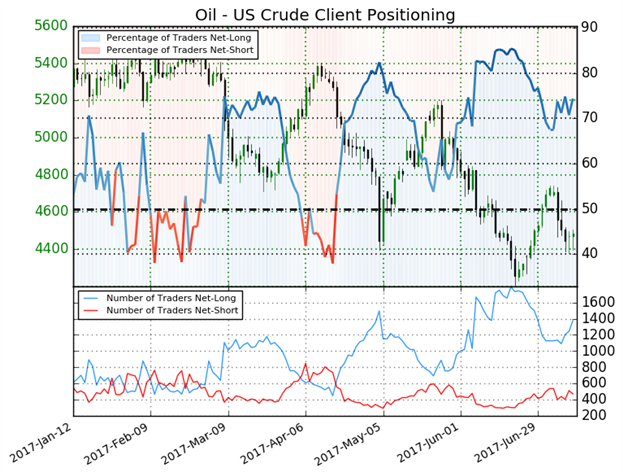