An uncomfortable technical picture is aligning with the uncertainty of a post-Brexit world. This uncertainty is becoming obvious, as we’ve seen equity market selloff, the Chinese Yuan be devalued the most since August to the US dollar, and subsequent aggressive US dollar strength.

At a time when confidence was reemerging in the oil market as demand was picking up and a potential balance from oversupply in the first half of 2016, the Brexit vote likely came at the worst possible time. While desiring to avoid a melodramatic statement, producers began accelerating production with the assumption demand was picking back up aggressively and that the dollar was under control. However, with the recent break above 12,000 in the US dollar index and the breakdown in equities like the SPX 500 we could see a drop in risk sentiment that brings WTI Crude Oil (CFD: US Oil) lower as well.

The natural question is how much optimization was priced in oil around $50? If the answer is ‘a lot’, what will the deflating optimism look like as we get a better understanding of how strong the dollar could become and if oversupply will become a problem again.

The chart above shows the strong rebound in the price of oil off the February low of $26.03 per barrel. When looking at trend continuation, naturally you want to see support continue to hold.

There are three things that stand out on the Daily US Oil chart. First, the resistance around $50 from the October high. Second, the lower high into the Brexit vote that was met with a much stronger US dollar. Lastly, the pressure now being put on the 55-day moving average that has been a clear directional bias indicator for crude.

At the risk of oversimplification, if the US dollar begins to strengthen further, and WTI Crude Oil (CFD: US Oil) falls back below the 55-Day Moving Average (currently at $46.59 per barrel), we could likely see a retest of the March corrective zone. This zone occurred when US Dollar showed strength again that eventually faded. This zone sits at $41.85/$35.81 per barrel. A break below this zone would favor retest below $30 a barrel.

Put another way; the recovery was fragile, and we knew it was such, but an unwinding of the risk-on environment and such an aggressive fashion could see a rather quick drop for which we should be prepared.

Given the strong pushes off resistance in the $50 area, most attention should be directed at support and whether or not those levels hold. If the support levels mentioned above do not hold, it will favor a further breakdown toward the Fibonacci zone mentioned earlier at $41.85/$35.81 per barrel.

The first low to focus on is $45.81, which is the June low. The second support level to keep an eye on is the Weekly S2 pivot at $44.44 per barrel. A break below the weekly S2 pivot often indicates an outsized move or a shock in the direction of a new trend. The third support level is $43 per barrel level that was the May low.

If these levels of support are broken, it likely indicates a larger risk-off picture is taking hold. In this event, we should look for higher US dollar and possibly higher XAU/USD or Japanese Yen.

Given sentiment post-Brexit, the resistance does not require as much attention. However, if we break above $50.51 per barrel that would likely be an indication that the bull market was shot at, and the bullet missed, and we could be on our way to seen a resumption of the risk on trade. While this is not the probable event, it should at least sit on the shelf until we get a clear understanding what a post-Brexit world looks like in markets.

Contrarian System Warns of Further Upside As of 6/27/16 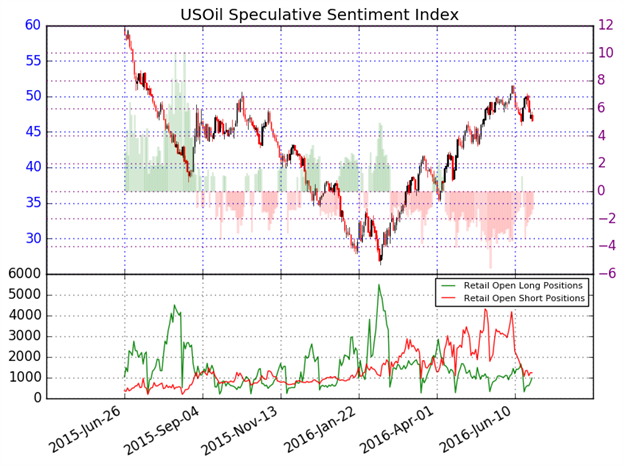 A break below the support levels mentioned above as well as a flip to Bullish Retail Sentiment could be the first credible signs from the combination of sentiment and technical analysis that downside bias is preferred.