The Japanese Yen is under some fundamental pressure against the US Dollar on reports that a state of emergency could will be declared as an escalation of Japan’s coronavirus response.

The Nikkei Asian Review reported on Monday that Prime Minister Shinzo Abe had decided to make the declaration as Tokyo’s new-infection count continues to climb. The government will reportedly hold a meeting with experts to start preparations.

Both the Japanese Yen and the US Dollar have functioned as haven assets in the current phase of market turmoil, with the Swiss Franc also cast as ever in a similar role.

Technically speaking the Yen might still be said to be winning its haven battle with the greenback, however, as the daily-chart downtrend from mid-February’s peaks remains well above the market. 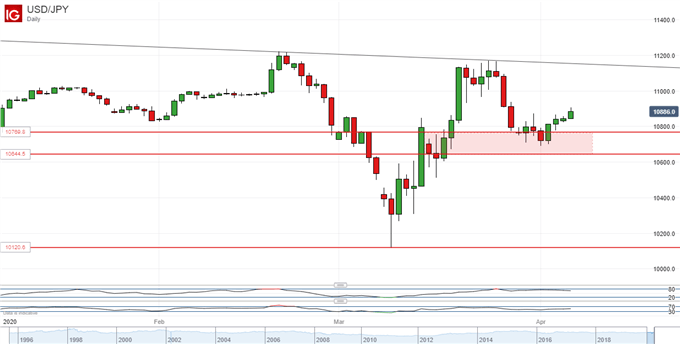 Dollar bulls have managed to keep the pair above a band of support formed by two key Fibonacci retracements of the impressive USD/JPY rise seen between March 9 and March 24. That band comes in between 38.2% retracement, 107.69 and 50% retracement at 106.45. It was quickly traded out of last week and its upper boundary would seem to be providing support now.

Of course, despite four straight sessions of gains, Dollar bulls have not made much of an advance, Resistance at March 26’s close of 109.10 still bars the way higher and, even if it breaks, the overall downtrend line doesn’t come un until 111.52, and it’s hard to see that coming under near-term threat.

Still, if the pair can hold above that resistance zone, then an attempt to retake the 111.00 handle is likely, perhaps this week.

AUD/JPY, meanwhile, offers investors a chance to gauge the performance of a more risk-correlated asset in the Australian Dollar against a classic, counter-risk play. 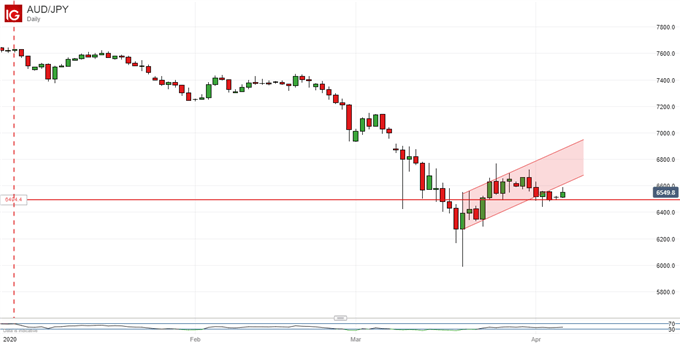 Unsurprisingly the Yen has battered the Aussie this year, taking the cross rate down to lows not previously seen since 2009. So far, the fightback has been tepid, with a nascent uptrend channel already vanquished to the downside. However, the market seems in no mood to force the pace pack to last month’s lows, even though the relatively small daily ranges on offer for the past couple of weeks suggest a higher degree of uncertainty in this market.

Australian Dollar bulls will probably need to recapture and defend the late March highs above 0.66 in short order if they’re to prevent a slip back toward those lows, however.