The Japanese Yen has risen to two-week highs against the US Dollar as fears surrounding the spread of so-called Wuhan strain coronavirus continue to rock financial markets.

Investors cannot help but have memories of the disruption caused by 2003’s outbreak of Severe Acute Respiratory Syndrome as this latest similar but so-far less lethal virus is found as far from its Chinese point of origin as the United States and Western Europe.

Given this sinister market driver, counter-cyclical ‘haven’ assets are much in demand, with Gold, the Swiss Franc and the Japanese Yen as ever atop the list.

Technically-speaking USD/JPY has retreated once again into a trading band it has been reluctant to leave for very long since November 3, whether the impulse to do so has seen a break to the upside or the down. 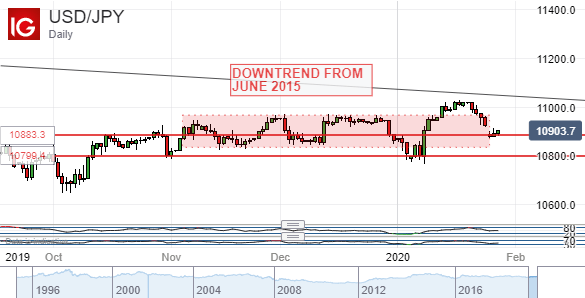 That band has so far proven perhaps surprisingly resilient. Within it, in fact almost dead center, 23.6% Fibonacci retracement of the rise from August’s lows to this month’s peak is clearly providing Yen bulls with something of a test. At 108.83 it’s still very close to the market, however, and continued risk aversion will almost certainly see it give way on a daily close.

That would in turn put focus on the range base, now at 108.30, with 38.2% retracement at 107.99 all-too-likely to face a test should that give way. Still, Dollar bulls will retain reason to be cheerful as long as the range holds, even though the sort of resolve they’re going to need for another try at the top seems to be lacking at the moment.

The Australian Dollar is one of the more growth-correlated currencies out there so it’s hardly surprising that it should now be struggling against the Japanese Yen, and it duly is. AUD/JPY has fallen for ten of the last elevens sessions, with some especially steep daily falls clearly evident on the candlestick chart. 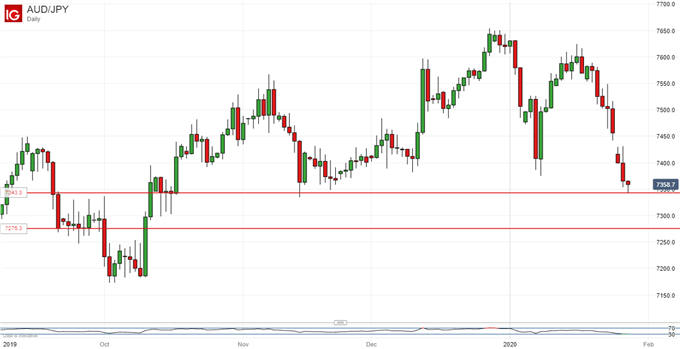 The cross is back down to lows not previously seen since October 2019, with the exception of one intraday lurch lower on November 14 which can be regarded as fairly spurious.The Aussie now seems to be pretty oversold, and may find at least a temporary base within the broad band separating the current market from 72.77 region which held the market back in late September last year.

In terms of domestic fundamentals the Australian Dollar awaits official inflation data which will probably be the last major clue that market gets before the Reserve Bank of Australia meets to set interest rates for the first time this year on February 4.

The wait for that number, due on Wednesday, may keep the Australian Dollar supported but is unlikely to be enough to fully mitigate any further, risk-related slide. If AUD/JPY does head south again, a break of range support will see the lows of last October back in focus quite quickly.