The Japanese Yen remains on the back foot as market fundamentals seem to argue increasingly against such counter-cyclical haven assets.

US equity is getting close to its longest and largest bull run ever as earnings season continues to please the crowds and many of the problems which beset 2019 seem less pressing. China and the US have signed what may be an underwhelming phase one trade deal, but the two sides seem resolved to move on to phase two and are at least still talking. Confrontation between the US and Iran has de-escalated short of full-scale military conflict and even the torturous Brexit story is moving on with the election of a big majority in favor of getting it done.

Technically speaking USD/JPY has Dollar bulls in charge. The pair is at what could be a crucial point on its monthly chart, nuzzling against a downtrend which has been in place since June 2015. 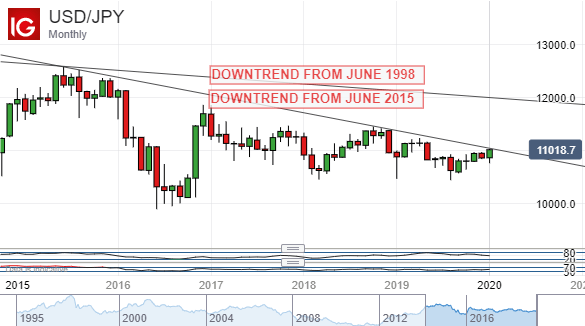 Clearly the run into month end will be most instructive for investors with a conclusive break above that point probably more bullish than it might appear. It would leave November 2018’s peak of 114.40 very much in play as a medium-term target.

It is notable however that the prevailing downtrend from 1998 remains a very long way above the market for Dollar bulls. That trend would only be broken with a break of 120.00 at this point and traders would do well to recall that the Dollar actually remains capped by that trendline even if we see a break higher this month.

In any case, that break is not assured. On its daily chart USD/JPY has risen sharply above what looks like an important trading range which goes back to November 6. The rise up from January 8 was sharp, and has seen the pair start to look overbought. The fate of this range could be important into month end, with a fall back within it likely to keep that downtrend from 2015 in place. 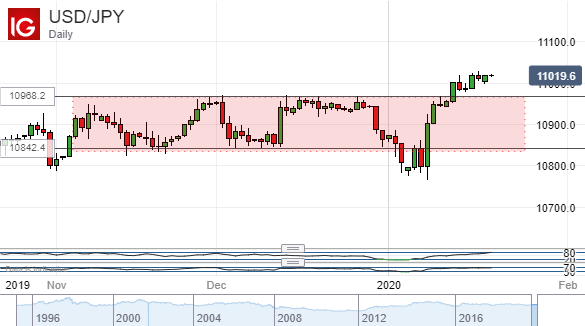 The Australian Dollar has put in a similarly sharp run higher against the Japanese Yen. This is a clear sign of increasing overall market risk appetite with this cross encompassing arguably the market’s favorite pro-growth unit in the case of the Aussie, and its number-one haven play in the case of the Yen.

However, that rise is losing steam with AUD/JPY showing signs of topping out well below December 27’s seven-month high of 76.62.

In quite well-correlated markets it seems unlikely that a break higher for USD/JPY would fail to perk up AUD/JPY as well, but this range will need watching as the week goes on.