It seems the Japanese Yen must still contend with USDJPY bulls’ concentrated efforts to build a base.

The pair has traded this week back up into its previous range, the second such bounce since mid-June.

It looks as though the market is reluctant to long relinquish the area around 108.44. That level is the important 61.8% Fibonacci retracement of the rise up from the lows of March 2018 to the peaks of October the same year. Neither has been exceeded since.

If it does, the next retracement level would come into sharp focus. Probably not coincidentally that comes in at this year’s low so far, June 25’s intraday weak point of 106.77. 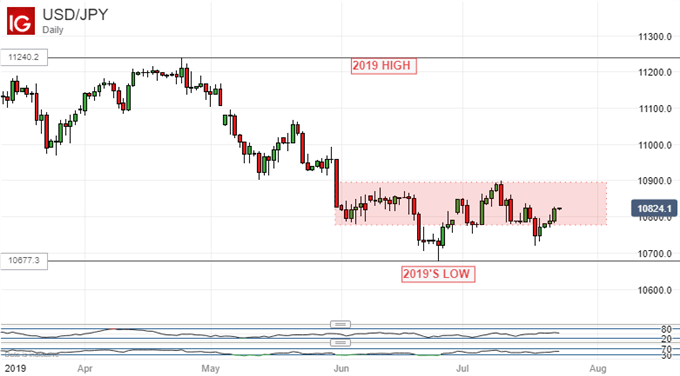 Currently the Dollar looks pretty solid, however, and there seems no pressing reason to suppose that the year’s low will face an especially stern test any time soon. Upside progress may be a different matter however, for at least as long as the previous significant peak of 108.97 remains so far above the market.

If it can be topped, then the sharp fall from late May’s highs will still need to be reclaimed. This is not impossible for as long as the current range holds but looks like a big ask in the near-term.

The Australian Dollar remains even more obviously range-bound against the Japanese unit, with the broad band which has endured for all of this month still corralling the market.

The daily candlestick chart is chock-full of the narrow daily ranges which can mean a high degree of collective indecision among investors, but it’s also notable that the cross has spent most of the last couple of weeks testing the upper half of this band.

Much will probably depend on USDJPY’s fate but for the moment this range looks to be all short-term traders have to play with.