The Japanese Yen is locked in the familiar ‘battle of the havens’ with the US Dollar often seen at times of heightened risk aversion.

The former has enjoyed the upper hand since late April, with USDJPY having retreated notably since then. However, technically speaking, the Yen bulls look to be getting a little exhausted. The pair has come down to lows not previously seen since February, but the Dollar’s slide seems to have been contained here. The point at which its slide seems to have been arrested is interesting. 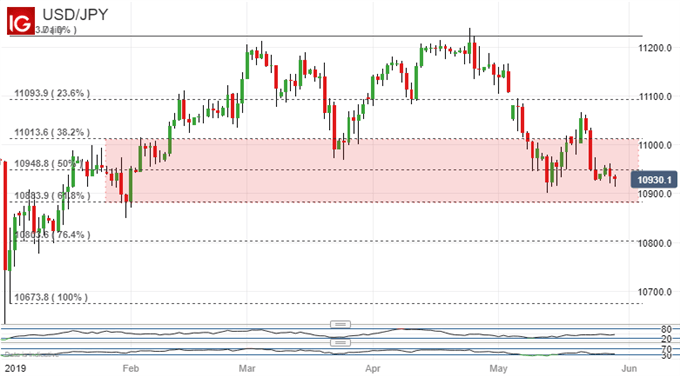 As we can see from the chart above that bearish impulse seems to have petered out around 109.49. Probably not entirely coincidentally that is also the 50% Fibonacci retracement of this year’s rise up from the lows of February to the peaks of late April.

Continued weakness here would bring the next, 61.8% retracement into view but momentum indicators suggest that a period of consolidation will be required around current levels before such a bearish foray could be made to stick. Be wary therefore of any short term probes downward.

If Dollar bulls can hang on then an attempt at the 110.14 point could be seen. This is the 38.2% retracement which gave way last week and now forms near-term resistance. Recapturing that would probably re-energize the upside play considerably but it’s far from certain to be seen anytime soon.

The uncommitted may want wait and see where the weekly and monthly close is relative to all three levels. It could be most instructive.

At the other end of the risk spectrum we find the growth-linked Australian Dollar. In the current fundamental climate it should be no surprise that the Aussie continues to suffer against the Japanese Yen, with general risk aversion accentuated in that currency’s case by sliding bond yields and prognoses of further interest rate cuts ahead.

This toxic cocktail has already seen AUDJPY abandon the broad range which endured for much of this year, with Aussie bulls now desperately trying to build some sort of base just above this year’s January lows.

It’s arguable that they’ve been quite successful so far given the swathe of fundamental negatives now in this market, but it’s also highly probable that the consolidation we can see in USDJPY has played a part too. If that major pair falls further, it’s all-too likely that AUDJPY will be going with it, with those January lows probably the first to fall.