Heightened risk aversion has provided the fundamental backdrop for a resurgence of the Japanese Yen against the US Dollar, which has seen USD/JPY slide through some key technical supports.

The uptrend which had previously endured all year was broken on the daily chart by last Friday’s sharp falls and has not been recovered since. 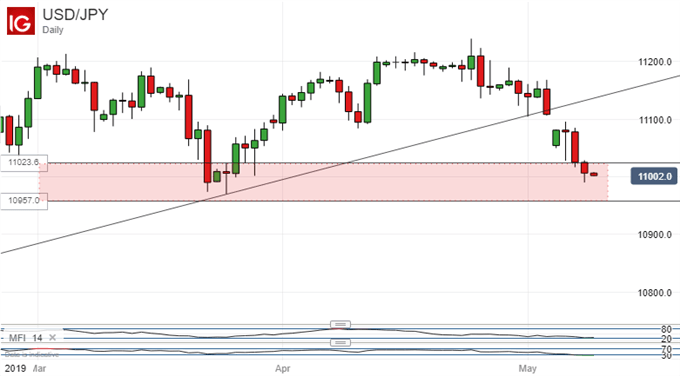 More recently, enduring falls have taken the greenback below the second, 38.2% Fibonacci retracement of 2019’s gains. That came in at 110.23 and now forms the upper boundary of a possible trading range whose base comes in at 109.57- the 50% retracement level. A daily or weekly close below that point might mean at least a short-term harder time for Dollar bulls but, if risk appetite were to revive, it is hard to spot fundamental reasons why the pair should weaken substantially.

It’s also worth looking at the longer-term monthly chart. 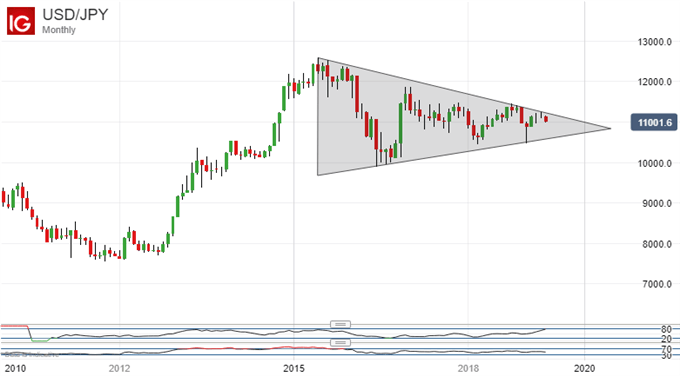 Action here has been quite torpid since early 2016, but the chart also seems to be forming a clear pennant formation. This crossing of up and down-trend lines is usually seen as a ‘continuation’ pattern which portends a return to the preceding trend. In this case that would point to more USD/JPY gains in the medium term.

The Australian Dollar is suffering a similar fate to its US cousin against the Japanese Yen, and probably for very similar reasons. However, AUD/JPY has fallen significantly below the persistent trading range which had previously endured since January 4.

The break doesn’t look absolutely conclusive yet, and it may be well worth keeping a close eye on this week’s close, just in case the bulls can reinstate the range.

However, if they can’t the year’s lows will probably come back into view quite soon as there are few clear props between them and the market.

Whether you are new to trading or an old hand DailyFX has plenty of resources to help you. There is our useful trading sentiment indicator which shows you live how IG clients are positioned right now across a broad range of currencies and other assets. We also hold educational and analytical webinars and offer trading guides, with one specifically aimed at those new to foreign exchange markets. There is also a Bitcoin guide. Be sure to make the most of them all. They were written by our seasoned trading experts and they’re all free.