The Japanese Yen has been under pressure against the US Dollar for much of 2019 but its bulls seem to have found a line to hold around current USD/JPY levels where the greenback is making heavy weather of progress.

Admittedly USD/JPY remains within the daily-chart uptrend channel which has delineated trade since the lows of January. 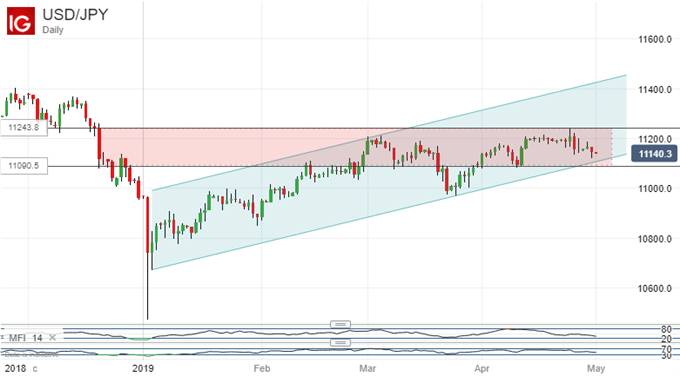 However, as we can clearly see, the top of that channel has not faced a serious challenge since March 6 and now its lower bound is far closer to the market. Indeed, it provides immediate near-term support at the 111.00 mark.

An approach to that would also imply a test of the current range base at 110.91. If both give way that would be a pretty strong signal that the pair had topped out at April’s highs. Focus would then center on the previous significant low, the 109.65 set on March 25. That would coincide almost exactly with a 50% retracement of the year’s rise so far.

Any return to vigor for Dollar bulls would probably see an attempt at the range top, 112.44. A break above that might be significant as it would mean that the sharp falls we saw back at the end of December had been all-but clawed back. This would be a striking vote of confidence, but it doesn’t look likely in the near-term at least.

It is worth pointing out that Japanese markets will be thinly staffed until May 7 because of the extended public holidays around the accession of the new Emperor there. Tokyo is usually a regional rather than global foreign exchange bellwether. All the same the uncommitted may be well advised to await its return for a full picture of the Yen’s position.

Against the Australian Dollar, meanwhile, the Japanese Yen has been pretty much rangebound all year. The cross did manage a few days above the range top last month, but it has now sunk back emphatically within it.

The Aussie seems to be consolidating above the range base for now, but momentum remains middling and does not suggest the impetus for a break either way anytime soon.